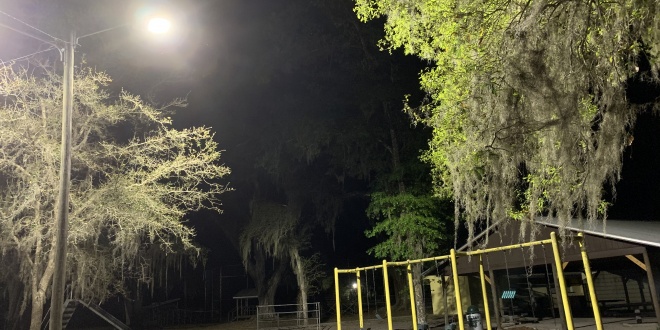 A LED shines down on a playground near Micanopy’s ballpark. According to Duke Energy, the new lights were installed so no lighting escaped into the trees above where they are mounted. (Kyle Chambers/WUFT News)

Micanopy residents this month have been greeted by a brighter light in the dark.

As a result of a partnership with Duke Energy, 123 4000 Kelvin light-emitting diode streetlights now light the town’s roads. The new streetlights replaced all existing high-pressure sodium amber lights that the town rented.

“The original streetlights were old and many of them worked only intermittently, if at all,” Town Commissioner Mike Roberts said. “It was only a matter of time before most of them went out.”

According to Roberts, Micanopy pays to upkeep streetlights even if they are not working properly. Problems with the town’s lighting system motivated officials to start looking for a way to resolve the issue.

Roberts said he made a note of around 40 lights that did not work properly when he first joined the town commission in 2014.  The town contacted Duke Energy to fix the lights, but they eventually malfunctioned after being repaired.

To help the town find a permanent solution, Roberts said he asked Duke Energy contact Dorothy Pernue about LED lighting. Pernue agreed to come to a commission meeting to deliver a presentation on LEDs, where she told town officials that the company no longer made replacement parts for the old streetlights.

Following a light sample test and evaluation, Micanopy’s planning board recommended the town transition to LED lights, he said. The new LEDs were installed at no cost on existing light poles.

But not all of Micanopy’s residents were satisfied with the town’s lighting change.

Michael Withee and Megan D’Andrea live in the town and launched a petition by email in late February requesting that town officials install a special reflective tape to decrease the amount of light given off by the new LEDs. According to the petition, unshielded LED lights pose a danger to nighttime beauty and native wildlife.

More than 50 people decided to sign the petition. No one from the town has responded to the request, D’Andrea said.

The pushback includes concerns about the impacts on nature. Several native species might be impacted by light pollution given off by Micanopy’s new LEDs, University of Florida professor of wildlife ecology and conservation Mark Hostetler said.

“With these new bright white lights, I can see why some residents are concerned,” Hostetler said.

According to Hostetler, the lights would mainly affect birds and mammals. Nocturnal animals could face stress and have their nighttime behavior disturbed due to the LEDs. Birds like owls that use Micanopy as a stop during their migration could also be driven away by brighter lights.

Even Micanopy’s night sky could see drastic changes, he said. Brightening from the LEDs, known as light pollution, may make the town’s starscape unrecognizable.

“It’s an aesthetic loss,” Hostetler said. “If you lived in that area, you likely couldn’t see stars as well anymore.”

LED lights are much brighter than high-pressure sodium lights, said UF Department of Astronomy associate scientist Francisco Reyes. Light escaping into the sky may make star clusters like the Pleiades harder to see by observers on the ground.

“These lights essentially blind people,” he said. “If you just use the naked eye to watch the sky, you could encounter a lot of light pollution.”

Reyes assumes light pollution would increase due to the increased color temperature of the LEDs. However, any level of light pollution affecting the night sky would likely be minimal, he said.

“Outside of bigger cities like Gainesville, light pollution is usually at a low level,” he said. “But use of any type of artificial light is bad for astronomical observations.”

“LED lights do have an effect, but I can’t say whether it would end up being significant,” the Micanopy resident said.

Campbell said artificial lighting can impact the timing of plant growth and development. A plant’s internal clock can be influenced by LED lights, speeding up or slowing down the rate that buds form. However, this phenomenon is typically not a big issue in the southern United States.

Micanopy did not conduct an environmental assessment before installing the lights, Roberts said.

According to Duke Energy representative Ana Gibbs, the new LEDs are half the wattage of the old lights, keeping light levels similar. She said the lights were installed “full cutoff,” meaning that most of the light travels down instead of up into the sky.

After 90 days of installation and operation, Duke Energy will put up shields on a case-by-case basis as recommended by city commission and the planning and historic preservation board, Gibbs said. A fee will be issued for their installation.

Kyle is a reporter for WUFT News who can be reached by calling 352-392-6397 or emailing news@wuft.org.
Previous UF Students Abroad Describe The Scramble To Return Home As Pandemic Ensued
Next Gainesville City Leaders Host First COVID-19 Town Hall Since Stay-At-Home Order Issued