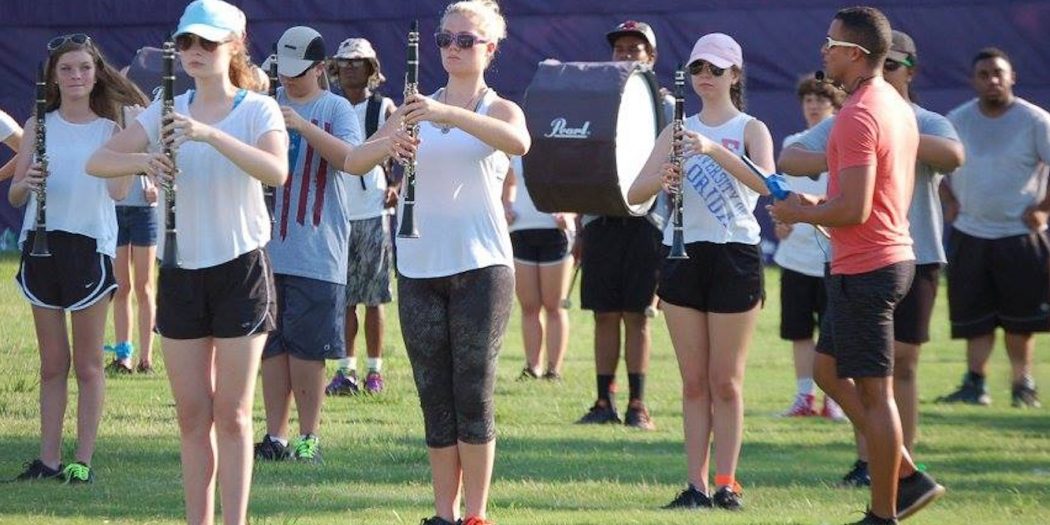 The Man Behind The Marching Band

Like thousands of high schoolers across the country, Arjuna Myles spends weeks every summer at band camp. Sweltering under the hot sun, he directs hundreds of high school students scampering in intricate patterns across football and practice fields around North Central Florida, like ants under a microscope.

But Myles is no band’s director. He’s a drill designer; he designs all the movements and props for members of several competitive high school bands.

He’s had a lot of success, but Myles, 32, doesn’t care about the trophies. It’s about the band family.

The term drill, originating in the military, refers to the marching steps and movements of the band. As a drill designer, Myles choreographs every movement, expression and sequence before teaching them to marching bands. One part puppeteer, one part choreographer.

On a recent afternoon, Myles sat, arms crossed, at a back table in Coffee Culture. He doesn’t drink coffee, but it’s a convenient place to meet. After rolling up the cuffs of his button down to show his tattooed forearms — a tribute to video game The Legend of Zelda — he talked about how he came to this unusual profession and about the rapidly approaching chaos of summer band camp season.

A Gainesville native, Myles played French horn as part of the Santa Fe High School Raider Regiment. He began designing drill as a freshman, scribbling designs on scraps of graph paper and math homework. After graduating from Santa Fe, Myles decided to pursue a career as a full-time drill designer. He believes he’s one of only 10 or 20 people nationwide who designs drills as his full-time occupation.

Myles was an early adopter of FieldArtist, a computer program that allows the user to visualize drill designs. He said it caught his attention because it felt like playing a video game. Myles now posts YouTube tutorials for the program, something he says helped him get clients immediately after graduating.

In his first year, Myles wrote shows for just three bands, West Bladen High School in Bladenboro, NC and Hamilton and Weslaco High Schools in Weslaco, TX. He now averages 25 to 30 shows per season, complete with props and animations. He has written for schools in more than 20 states, helping bands to win multiple state titles and world championship titles in indoor percussion, color guard and wind competitions. Myles also writes drill for winter percussion and color guard, more theatrical competitions that take place in the offseason.

In the early stages of his career, he found it hard to make enough money during marching band season to last him through the offseason. Now, he’s more concerned with having enough time to write for every school that wants him.

Myles says that his job, though stressful and unpredictable, is his dream. Despite the challenges of juggling commitments to many schools at once, he finds satisfaction in seeing his creations come to life.

“When it’s a really competitive band and they take it seriously, they perform at such a high level that it’s very rewarding and fun to see the kids’ reactions after they perform a show,” Myles says. “Kids are always thanking me on Facebook and sending me little messages on Instagram.”

Myles is on full-time staff for Gainesville High School’s band department during competition season. Ally Mandes, a senior at GHS, says students like Myles because he’s willing to joke with them.

“He is simultaneous all business, all ‘Let’s get this thing done,’ but also chatty and joking around with everyone,” she says. “He’s the approachable (teacher) in the band room.”

Outside the GHS band room, Myles keeps occupied with other schools. Every year, Myles waits until late spring for the final count of band members per school. Then he is on crunch time until August to write the design, communicate with band directors, teach shows and help bands execute them.

During his busy season, he frequently writes drill in the middle of the night, preferring to spend much of his day playing with his 4-year-old daughter, Kaishori.

“I just like the teaching experience; I love working with these kids,” he says.

Jeremy Lee, director of Unity Percussion and Group 352, two area indoor percussion groups, has worked with Myles for almost 15 years. He says Myles is so good with high school students because he is both firm and motivating.

Lee says his proudest moments with Myles don’t revolve around trophies or accolades — though there are several of those — but the difference they make in the lives of students.

“We’ve won state championships and titles, but those are all things that we can just dust off and look at from time to time,” Lee says. But it’s cool to see the kids that we’ve worked with…they come back six and seven years later and say to us ‘You know, you’ve really made a difference in our lives.’ That’s our biggest accomplishment.”

Myles talks animatedly about the band camp season and the huge workload he’ll face before it arrives in late July or early August. He hopes to start writing drill as early as April to lighten the load later in the summer. He is simultaneously weary and excited, thinking about all the new faces, inside jokes and sunny days spent carrying heavy brass and drums.

Myles says writing drill gives him the opportunity to stay in the marching band family that he loved in high school.

“You can discover yourself through band,” he says. “It’s really all about making these friends. They go to the band room and that’s their spot, that’s family.”

Camille is a reporter for WUFT News who can be reached by calling 352-392-6397 or emailing news@wuft.org.
Previous Gainesville Residents Voice Desires For Ideal Construction Of Unity Park
Next Evening News in 90: Feb. 21, 2019