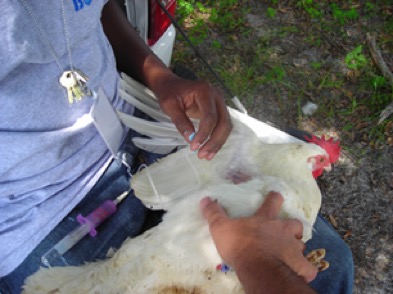 A FDOH worker conducts a "painless" blood sample on a group of chickens to test for EEEV and WNV in Alachua County, July 9, 2018. (Courtesy of Anthony Dennis/DOH-Alachua)

FDOH On Alert For Mosquito-Borne Diseases

In 2001 a sudden disappearance of a large population of blue jays due to the West Nile Virus caused serious concerns for Alachua County entomologists.

Florida’s infamous skin-diving insects, a vector for WNV,  know just when hurricane season is about to roll around. This year, some of them pose a similar threat by spreading diseases among animals and humans in Florida.

Recent surveillance has the Florida Department of Health on alert for mosquito-borne viruses in Alachua County.

“Back when the virus was first introduced, those blue jays and some other animals were extremely susceptible to the disease,” said Dr. Philip Koehler, a professor of entomology at the University of Florida. “In terms of our current mosquito activity, it won’t be expected to decrease until we get some cold weather.”

Only two human cases of the diseases, one of each, have been reported in Florida earlier this year. One case of the EEEV infection occurred in May followed by a WNV blood-positive donor case in June.

June also did yield the highest number of veterinary cases (15) for EEEV in 2018, and data for July has not been finalized yet.

Anthony Dennis, Environmental Health Director of the FDOH, said that mosquitoes can become a serious risk to residents’ health if not treated properly.

“Sometimes mosquitos are thought of solely as the annoying pests that just make us scratch ourselves,” Dennis said. “Without proper safety measures, hikers or campers can be in for a long day.”

According to Dennis, the EEEV virus is especially active in early summer, while later in the year, “in fall, West Nile virus becomes the primary concern.”

According to an annual Bug Barometer forecast conducted by the National Pest Management Association, mosquito activity was expected to rise throughout the summer because of an increase in residual moisture in the Southeast.

Combined with Alachua County’s high amount of average rainfall, it’s no surprise that the swamp is one of many homes that mosquitoes prefer.

“The FDOH’s surveillance system should continue to monitor the presence of these viruses in the area, and residents should always report mosquito problems to the county,” Dennis said. “The next couple months might be annoying if you’re caught outside without repellent, but the important thing is that we keep people safe from these airborne diseases.”

The FDOH uses various animals to conduct their mosquito surveillance. Chickens, horses, crows and other types of birds are frequently blood-sampled to test for mosquito-borne diseases in the area.

While they’re bitten by mosquitoes the same as humans, some of the chickens that the FDOH has collected are immune to certain mosquito-borne illnesses like WNV and EEEV.

Dr. Cynthia Lord, an associate professor of entomology at UF, is working on understanding the transmission patterns of diseases and their vectors. One of her major research projects deals with the epidemiology of WNV in Florida. Lord explained how these mosquito-borne viruses are different from the 2016 Zika epidemic.

“These two viruses are fairly different from Zika because they are transmitted by different species of mosquitoes,” Lord said. “But both viruses cycle between birds and insects and can also affect humans, so the most important thing is still prevention.”

The FDOH and Alachua County remind their residents to drain water from garbage cans, discard old tires and to maintain the water balance of their pools in order to stop the spread of mosquito-borne diseases.

These safety measures help slow down the reproductive process for mosquitoes, as they are breeding in still water.

Edgar is a reporter for WUFT News who can be reached by calling 352-392-6397 or emailing news@wuft.org.
Previous Children’s Meal Program Keeps Expanding In Alachua County
Next Judge Halts Lawsuit Against GRU Authority Referendum, Keeping It On November Ballot