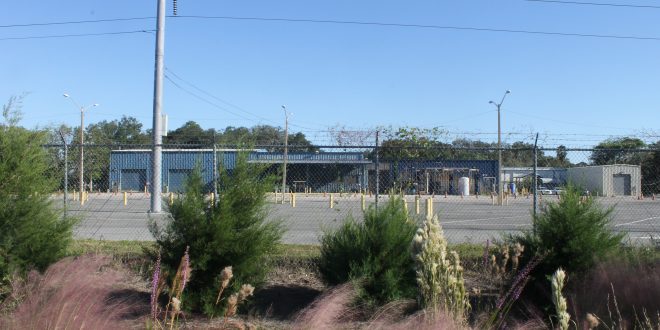 The former Regional Transit System site on Southeast 10th Avenue and the proposed site for a 2,500-seat amphitheater. The proposal has been met with marked opposition among residents who note potential issues with noise, parking, gentrification and a decreased emphasis on nearby Bo Diddley Community Plaza. (Alyssa Weiss/WUFT News)

On the south side of Gainesville’s downtown area lies Depot Park, a newly revamped public greenspace that contains a kids’ playground, a pavilion with picnic tables and open lawns.

City officials hope the site will soon also feature a 2,500-seat amphitheater. The cost and timeline for what is still a proposal are unknown, but it is tentatively set to be built on Southeast 10th Avenue, a former Regional Transit System site and currently an overflow parking lot for Depot Park.

City Commissioner Adrian Hayes-Santos said he believes Gainesville has reached a population size that would benefit from a larger music venue. An amphitheater would fill that role, he said, and it would have many positive impacts.

“We hear a lot that Gainesville doesn’t have enough fun activities,” Hayes-Santos, who first began exploring the possibility in August 2016, said in a phone interview. “This amphitheater will help create a vibrant downtown,” where visitors to the amphitheater will also eat at local restaurants and stay at nearby hotels.

But the amphitheater idea is already meeting marked opposition. Talk of it has been happening for about 15 years, but with it gaining noticeable traction recently, dozens of complaints have poured into city commissioners’ email inboxes, starting mainly in September.

The amphitheater, the emails say, would cause noise problems in neighborhoods near Depot Park and would also worsen parking congestion — something they say is already an issue for downtown. The complaints also express worry over possible gentrification in the surrounding areas and a decreased emphasis on the newly remodeled Bo Diddley Community Plaza, which is less than a mile north of Depot Park.

“We as a community can bring people to Depot Park without building an amphitheater,” 25-year-old Christopher Flowers, who has been in Gainesville since 2010 and lives a block away from the park, said by phone. “Frankly, I don’t think it needs that draw.”

Commissioners adjusted to noise concerns by moving the proposed site a few hundred feet — from inside the park to the Southeast 10th Avenue lot, which is closer toward industrial sites and farther from neighborhoods.

Nevertheless, Hayes-Santos said the amphitheater could be designed in a way to prevent noise from escaping, which is something the University of Florida’s football stadium and Bo Diddley Community Plaza don’t have.

Hayes-Santos said the amphitheater’s feasibility study — which is in its “very early stage” and is the key before any other steps are made — will consider noise levels and parking issues. Officials understand that many problems can be associated with the amphitheater, he said, but those problems shouldn’t be a deterrent from pursuing the idea.

“Just because we have potential issues doesn’t mean we should never do anything there,” Hayes-Santos said. “We should just find out how to fix them.”

Hayes-Santos and the city haven’t been met with total opposition.

Andrew Hall, a Gainesville resident of more than a decade who lives off Archer Road several miles from Depot Park, said he sees the same benefits noted by Hayes-Santos.

He said he can understand why people are concerned about the noise levels, but he ultimately doesn’t think that should affect officials’ decision.

“I’ve got a lot of hip-hop-artist friends that I would love to look forward to seeing play in an amphitheater with a crowd of people and see them prosper,” Hall said.

The positive impacts of the amphitheater outweigh any concerns associated with it, Hall said. For him, having greater concerts than those already taking place at Bo Diddley, UF and other Gainesville venues is the most important factor.

Gainesville resident Paul Boan works in the Gainesville Area Chamber of Commerce building, which is a block away from Bo Diddley. He said that, like his coworkers, he worries an amphitheater would pull attention away from the plaza.

Bo Diddley underwent a year of renovations (at a cost of $1.8 million) and re-opened to the public in March 2016. Boan said he is concerned that, after the city spending the money, the overhauled plaza will lose some of its draw to the new, larger venue.

Flowers also said an amphitheater would take away from Bo Diddley and that Gainesville isn’t lacking in venues now. Great musicians are, in turn, already coming to Gainesville, he said.

“It seems arbitrary and silly to take on more taxpayer money to build a stage that’s 10 blocks away to the last city project,” Flowers said.

Boan, like many of those who have noted their opposition, is also concerned with parking, especially because the amphitheater would take over an existing lot.

Though Hall is a supporter, he said he also recognizes that parking will be an issue and that city officials need to thoroughly consider it while making plans.

“I think it’s silly that there’s an issue of no parking,” Hall said.

For Lesley Gamble, the level of noise that could be projected from the amphitheater is a huge concern.

In an email to the city commissioners, Gamble said she can hear Bo Diddley concerts from her home, which is about two blocks from the plaza and then about three-quarters of a mile north of Depot Park.

“I chose to live in a residential neighborhood, not an amusement park,” Gamble wrote in the email.

Meanwhile, Flowers said he can hear noises in his house coming from UF football games more than 2 miles away and that he is certain noise from the amphitheater will be heard in his and other surrounding neighborhoods.

But Flowers’ biggest concern is gentrification. It’s already happening in Gainesville, he said, and an amphitheater would only make it worse.

Specifically, he said, developers might want to build new apartment complexes close to the amphitheater. This development would cause those living in the surrounding areas — which are historically black neighborhoods — to be bought out of their homes.

“The southeast side and east side of Gainesville is historically black,” Flowers said. “It’s difficult to see both the university and the city continue to encroach on these vulnerable communities, who don’t have the money or collectivized voice to say that they don’t want it.”

Ultimately, though, Flowers and other opponents said that if an amphitheater is indeed going to be built in Gainesville, it should go elsewhere.

“If we’re smart as a community and mindful of the impact it can have on other people, and we can consider our neighbors, we can come to a solution that appeals to everyone,” Flowers said.

Yet for supporter Hall, the amphitheater would simply be another perk to Depot Park, which he frequently visits.

“I really love what’s going on around Depot Avenue,” he said, “because those are my stomping grounds.”

Alyssa Weiss is a senior journalism student. She covers the zip code area 32601 in Gainesville. Feel free to email her at alyssanweiss@ufl.edu or call/text her at (954)482-2630 if you have comments, concerns or a story idea.
@@alyssa_n_weiss
Previous Oct. 26, 2017: Morning News In 90
Next Shands Hospital Opens Room For Victims Of Sexual Assault