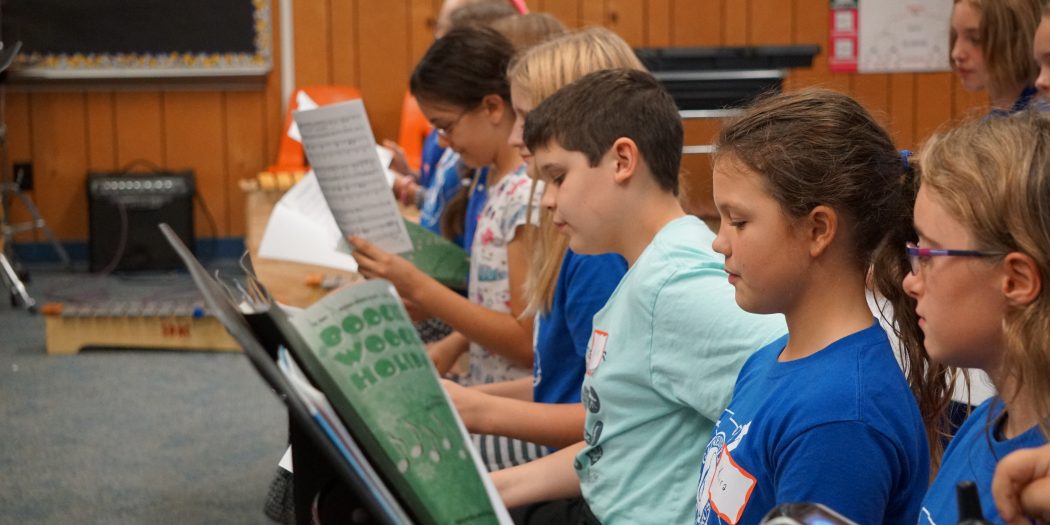 Ever since Deborah DesForges was a young girl, singing and music was a part of her life. Whether she was expressing her love by singing with her father or building lasting relationships through various choir groups, music became the driving force in her achievements.

“Singing was as natural as breathing for me,” DesForges said.

When she started the Gainesville Youth Chorus, Inc. in 1994, the drive to spread this uncharted love of music to her fellow community members never ceased. Giving nearly 60 children the chance to express themselves and find their voice through song every year, DesForges looks forward to Thursday afternoon rehearsals where her children find the joy in singing.

“I want to help children to learn to love to sing and to have music in their lives,” she said.

Organizations like the Gainesville Youth Choir are a snippet of Gainesville’s thriving arts and cultural scene. Being a nonprofit, the organization relies on fundraising, grants and funding to continue their expenditures. However, the past year saw a dramatic decrease in state funding.

According to the Florida Cultural Alliance, about a dozen arts programs have experienced cuts in state level funding in the past year. This includes the Hippodrome State Theater, the Harn Museum of Arts and the Gainesville Youth Chorus (GYC), Inc.

However, after an extended application process, the organization received an outside agency grant of $6,280 from the City of Gainesville Department of Parks, Recreation and Cultural Affairs. The grant is then used towards the organization’s general operating expenses and educational programs.

“People want to come and see what is happening here in the city because they enjoyed the Gainesville Youth Chorus,” said Maxine Rushing, the Grants Program Specialist for the city of Gainesville. “It brings tourism. And when it brings tourism, that helps many things.”

According to a study conducted by the Americans for the Arts organization, arts and cultural organizations generate revenue of over $1 million  to the local government in Alachua County. About 27.8 percent of audience members are nonresidents, bringing expenditures of up to over $32 million. Along with attending the performances, attendees also generate revenue to the local government by allocating costs to dining, transportation, parking and lodging.

“We like supporting nonprofits here in the city because we know it only makes the city better,” Rushing said. “[Gainesville] is just a vibrant place and we’re always looking for better ways to help the citizens.”

Other opportunities for GYC to gain revenue come from the numerous fundraisers done throughout the year. The organization will hold its second annual 5K Walk/Run in November. The biggest contribution comes from discount cards that members purchase and use at different locations. This gives the GYC ample opportunity to support local businesses in the community while subsidizing the cost of running the organization.

“Our fundraisers are designed to be spread throughout the year and to make maximum use of time and resources,” DesForges said.

Every Thursday, the children meet with DesForges in a small portable at Glen Springs Elementary School for their weekly rehearsal. Currently, they are rehearsing for their holiday concerts that will be performed throughout the community.

DesForges, a former music teacher at the elementary school, returns to the place where her love of music blossomed for 37 years. Today, it allows her to bestow that same love upon the children.

“One of the ways that we have been able to defray our basic operating expenses is through the support of Alachua County Public Schools and Glen Springs Elementary School,” DesForges said. “Glen Springs is home to GYC.”

“GYC has been a long tradition here and my job is to keep supporting them,” Armstrong said.

Well into his second year as principal of Glen Springs, Armstrong continues to advocate for the Gainesville Youth Chorus, while also keeping the arts programs at his own school thriving as much as possible.

“Our programs teach routines and we see our kids grow while connections are made,” Armstrong said. “We cannot neglect that.”

Armstrong ensures that his arts and music classes are kept with the highest regard, enlightening the minds of children and parents alike.

“The arts are a big part of us,” Armstrong said. “That’s the reason some kids go to school.”

Arts and cultural programs have been a staple in many children’s lives through generational moments.

In fact, a 2009 study from the Center of Arts Education found that higher graduation rates are found among schools with strong arts education program. According to the report, the structural skills needed for these program enhance critical thinking skills and collaborative efforts for students among their peers.

This finding was especially true for GYC parent, Theresa Williams.

“I was not exposed to the arts the way my children were and the difference is incredible,”  Williams said. “[My kids’] ability to think in ways that I was never able to at that age always amazes me.”

Williams serves as the organization’s wardrobe coordinator, executive assistant and bookkeeper. Her two children, ages 23 and 16, are a GYC alum and member, respectively. Their entire childhood comprised of the efforts made by the GYC family and the love of song.

“You go in [the group] and there are all of these strangers,” Williams said. “Before you know it, they are all your friends.”

The same can be said for new GYC parent, Will Voelker, whose nine-year-old son just joined the chorus group this year.

“He walks around singing all the time,” Voelker said. “When I saw the audition sign I asked him if he wanted to join and he said yes, and he really loves it.”

Voelker is the founder of Noah’s Endeavor, a nonprofit benefitting children with disabilities. The effect of arts programs have helped many of the children that he works with integrate themselves with other members of the community.

“[Arts] helps kids with disabilities be able to communicate,” Voelker said. “They participate with kids who don’t have disabilities and they interact with them.”

As a former music teacher, DesForges is well-versed in the benefits of arts education and arts programs. She saw it firsthand in her own experiences as a child, later affirming that same belief in her 40 years of teaching. One of the biggest benefits, states DesForges, is that the GYC teaches the children how to work together.

“When you are in a choral group, you are doing something in tandem with other people,” she said. “The group cannot be successful if not everyone is contributing 100 percent.”

This extends to the sea of parent and family volunteers who have allowed the Gainesville Youth Chorus to continuously flourish throughout the Gainesville community. DesForges states the unwavering support of each member is one of their biggest factors of success.

“Without its strong core of volunteers, GYC would not be the organization that it is now,” DesForges said.