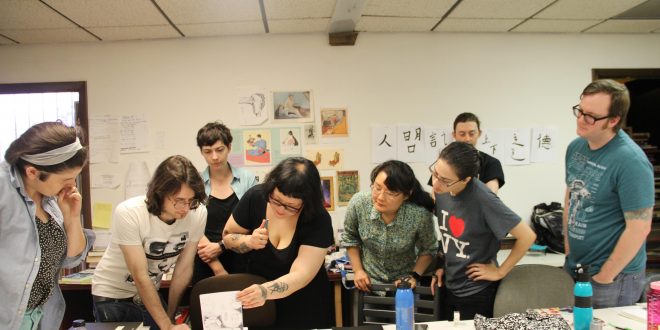 Laura Park gives students at SAW advice on how to improve their art. Their activities focused on the importance of observation of the world and memories they can use in their comics. (Abby Stafford/WUFT News)

Laura Park, an accomplished cartoonist who has worked with author James Patterson, visited Gainesville in late February and early March to teach 10 or so artists at the city’s Sequential Artists Workshop.

The SAW, on Southeast Second Street, opened in 2012 and provides year-long programs and sometimes week-long workshops, such as the one Park led.

Park sat down with WUFT News during her Gainesville visit to talk about her life, art and how they collide.

WUFT: Tell me a little about yourself. You live in Chicago, right? How is the art scene there?

Park: Chicago has a really good arts community. It’s not so terribly expensive, and I don’t know much about Gainesville. But you know how a lot of universities in proximity to the arts creates a pretty good regenerating scene? There are the people making art who graduated from school who then start teaching. …

[Chicago] has that, but it’s really affordable. So people can stay and, in general, you are allowed to join in on activities. It’s pretty common for musicians to be in a few bands, and there’s a good spirit of “you’re allowed to join in.” And especially with comics, as comics teaching has become more of a thing, it’s just like within a year or two the students are getting folded into the general community.

So yeah, [Chicago is] a good place – horrible weather.

How did you get into doing comics?

I’ve always drawn. I went to art school for a semester, and it was too expensive. And I dropped out, and I was always really good at self-directing. I read comics my whole life, so I started making little things about my day to share with friends, and then it just sort of sealed.

It’s an art form I respect a lot, and it also seemed like, “Oh well, this is all my interests sort of intersect for this, so I guess I’m going to be a cartoonist.” … It’s the thing I’m most willing to dedicate my time to because there’s not a lot of glory or money in it, but [it] was the thing [that felt] worth the effort. I want to do this.

And you’ve done illustrations for books, too, right?

I do a lot of illustration. I illustrated two middle-grade series for James Patterson, a picture book, and I did some story boards.

There’s not money in comics, so usually people teach, they illustrate or they have some other job usually. I’m sure like with a lot of the arts, you try to find something that is using the skill set that you’re trying to develop, but everyone is pretty multifaceted out of necessity.

You mentioned that you draw about your life, and that’s a continuous theme in your work. Would you say that your life is your inspiration, or how would you describe it?

[My life] is the thing I want to reckon with that I find useful to use comics and art to explore. … Maybe it’s just something like that’s the way I settle it or make my peace about things. So it’s a bit compulsive and a bit therapeutic, and so I just went with it. There was a necessity in my life for that, so I just went with it.

And you include your Frenchie, Walter, too. How long have you had him?

He’s 6 and I’ve had him since he was … 6 weeks, and he’s perfect. He’s ridiculous. People put down their groceries and stop their cars to pet him. He’s great.

I’ve noticed that you’ve done a little more political drawings recently. Is that something that you’ve always been interested in or more due to recent events?

I think a lot of people who are creative are trying to figure out, like, “OK, we’ve got to show up to protests. We gotta support this.” But I have this skill set, and how can I benefit people in this way?

And I have a lot of respect for political artwork. It’s never been, like, this is what I feel the most, but it’s kind of impossible not to address it. But it’s also, like, people are trying to find ways to be useful.

In Chicago after the travel ban — and it’s still ongoing — all sorts of lawyers have started volunteering their time, and they just wait at O’Hare. So in case anyone is detained or doesn’t show up, they can get to work on the paperwork.

Then, a whole group started up of people who could not make it to protests, but they’re like, “You know what? I’m going to make sandwiches, and I’m going to deliver it to the lawyers.”

So I think a lot of people are trying to figure out how to participate and contribute, and that was sort of it. Like it’s like, well I can show up, but I draw and this will be good for me, but also I’d like to make something that other people can use and get something out of because it seems like we’re all kind of stone soup-ing this like, “What can I do?”

So I’m waiting for the protest music. It’s going to be epic when it comes.

So really, I was focusing on exercises that are writing and observation- or memory-based that concentrate a lot on detail because those things can be adapted into all those formats. …

Sometimes when you’re developing a character, it’s not obvious, especially because sometimes, you’re just really throwing elements of your personality into another avatar. So it’s useful to be able to look around the world and harvest that into what you’re doing or your own memories.

We’re really focusing on that because if everyone doesn’t want to ink the same way, draw the same sort of story, there’s not a really super useful way to demonstrate that. So it seemed that writing is a huge part of comics, so that’s what we’re doing — just a few tasks, but we’re doing them very well. Everyone is doing great.

What is your preferred format? What do you like to use when you draw or illustrate?

It depends. The Middle School book series I illustrated for James Patterson, they’re supposed to be drawn by a kid. So I just went to the grocery store, and whatever’s in the office aisle, that’s what I used. …

But for my own stuff, I use a lot of nib pens because I do a lot of cross-hatching. And that is sort of the traditional tool of it, and it works well and it’s an appealing tool for me. But it’s sort of wide open. Everyone in here is using different things.

I use water color to color things or digital, but I just prefer working in water color. I like the way it looks, and I like the process. So that’s what I use.

Do you do a lot of workshops around?

I know Tom [Hart] and Leela [Corman, the Sequential Artist Workshop’s owners], and that’s why [I’m doing the workshop].

I have a lot of friends who teach, and I’ve never been sure that I have the temperament or the want to do it. I respect it. … I guess it’s a selfishness because they’re always talking about their students, and I’m like, “I don’t want to own a group of kids for a semester. That doesn’t sound like what I want to do.”

A workshop is sort of different because a lot of times, people are enrolling at it like any other major. So I think a lot of my friends who teach at the Art Institute or Columbia, they’re getting people where it’s like they have an interest in comics and they’re having to choose a focus for college and they’ve chosen that. But maybe they’re not really experienced because they’re just starting.

Is it rewarding for you to work with a bunch of students here?

It’s exciting to see what [students in Gainesville] are doing, and it’s nice feeling useful. I really spent time figuring out the exercises because it’s like a puzzle, like what if everyone doesn’t want to make the same thing and I just really wanted them to be useful in a lot of ways, so it had to make me think, “Well, what do I find useful?” And I find harvesting my own memories or the world around me very useful, and in other non-reality-based comics … the thing I like is the ring of truth or familiarity in it.

So broadly, I thought that observation and memory are good skills to any kind of storytelling. They’re pretty key things. So really kind of developing it the same way that people learn yoga poses like here’s a good, reliable way to go into that. I thought would be a useful skill.

Abby is a reporter for WUFT News. She can be contacted at wuftnews@gmail.com
Previous GPD Retires Mounted Patrol Unit
Next Gainesville Gym Owner Grabs Awards For Weight-Loss Doc