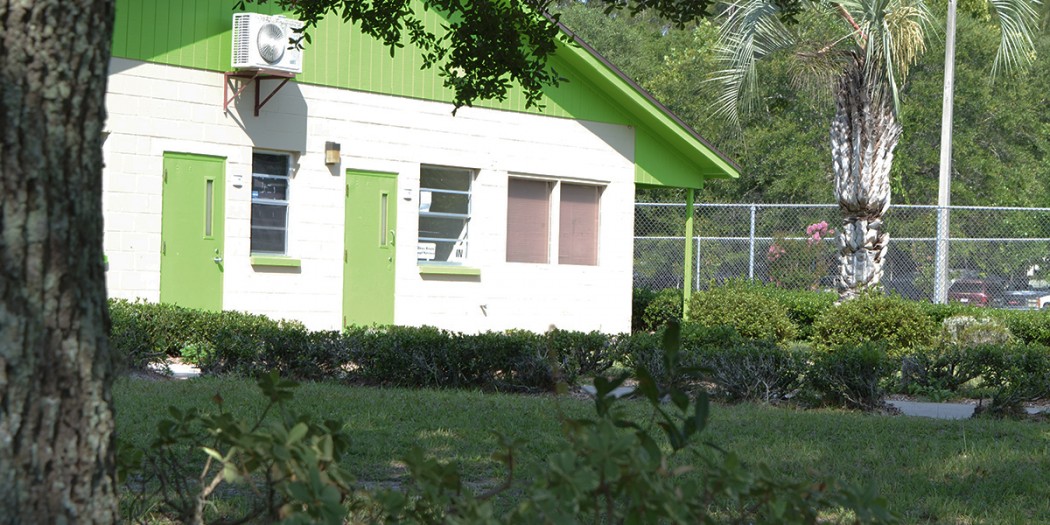 Before GRACE Marketplace was purchased in 2013, its Welcome Center served as the dayroom of the Gainesville Correctional Institution. Now, the Welcome Center is the first place a person will enter before receiving services at GRACE Marketplace. Intake is provided at the center, and basic necessities are also handed out. (Lauren Johnson / WUFT News)

Grace Marketplace Will Expand Services As It Gets New Building

On the 25 acres of land that Grace Marketplace sits on is a building that has been vacant for nearly four years.

The operations director of Grace Marketplace stood before the Empowerment Center Oversight Advisory Board on Wednesday to get the approval for access to the empty building. Grace Marketplace plans on using it to extend its services to a wider audience of homeless men and women in Gainesville.

Grace Marketplace has been open for about 2 years and has outgrown the space it was originally provided.

“Moving in there would allow us to expand and to increase the services we have available on campus which would allow us basically to provide more care to people and help people get off the streets faster and back into houses as quickly as possible,” Jon DeCarmine, the operations director of Grace Marketplace, said.

DeCarmine said they were serving about five times as many people as they originally expected and helped move more than 200 people into houses.

With some help from the former UF president, Dr. Bernie Machen, Grace Marketplace was able to fundraise the money that would go toward the renovation of the building.

Machen sat on the board with city and county commissioners at the meeting to review the request. Machen also showed his support for the project.

“This will cost us nothing,” Machen said. “This is as close to a freebie as you’re ever going to get.”

Grace Marketplace raised about $150,000 for the renovation. Arthur Stockwell, Gainesville Housing Authority chairman, said $125,000 of that money was contributed by an anonymous donor.

Joe Jackson, attorney for Grace Marketplace, said the whole vision behind the campus was that it would be a one-stop service center where people can go to one place for what they needed.

“The use of this building will enable us to realize that vision,” Jackson said.

The board had previously recommended the city turn the building over to Grace Marketplace. Jackson said that request was lost and had to be presented again.

Grace Marketplace plans to use the building as a place for their administrative, rapid re-housing and veteran services. It will also hold 12-step support groups and a women’s safe space.

Stockwell said the renovation of the building would take six weeks to complete. He also said the residents at the campus would be able to assist in the labor to get the building completed.

Catie is a reporter for WUFT News. She can be reached at news@wuft.org or 352-392-6397.
Previous Orlando Police Changes Policy For When Officers Can Fire Into Moving Cars
Next Aggressive Treatment Of Invasive Plants Evokes Mixed Emotions In Lake Rousseau