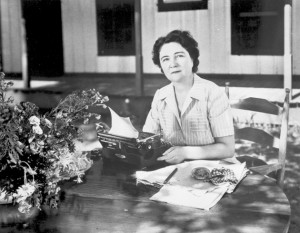 Marjorie Kinnan Rawlings seated at her typewriter at home in Cross Creek.

A free outdoor screening of the 1946 MGM classic movie “The Yearling” will be held 8 p.m. Sunday.

The Year of the Yearling began April 1 and will continue until March 31, 2014.

Florence Turcotte, literary manuscripts archivist at George A. Smathers Librares, said the novel is still a classic because people, especially residents of North Central Florida, can relate to the novel’s themes.

Turcotte said she encourages people to read the novel.

“The book will tell people a little about themselves,” she said.

The novel, set in the 1870s, focuses on a Florida pioneer family and discusses their issues with poverty, family relationships, the relationship between human and nature and the scarcity of water during the late 1800s.

Rawlings was born August 8, 1896. She is known for her rural-themed novels.

“The Yearling,” a story about a boy growing up in North Central Florida who adopts an orphaned fawn, is her most famous work. It was published in April 1938 and won a Pulitzer Prize for fiction in 1939.

The novel has been translated into multiple languages, including Japanese and Russian.

Memorabilia and foreign-language editions of “The Yearling” will be on display from 7 p.m to 7:30 p.m. at Smathers Libraries located at the University of Florida.

Scenes from the novel will be reenacted Friday at Smathers Libraries.

Emily is a reporter who can be contacted by calling 352-392-6397 or emailing news@wuft.org.
Previous WUFT Weekender: Spring Arts Festival, Fashion Week, Jest Fest!
Next Free self defense classes for Sexual Assault Awareness Month

Everyone from Dungeon Masters to Pokémon trainers assembled for the first gaming flea market on Saturday at Gamesville Tabletop on Northwest 25th Place.