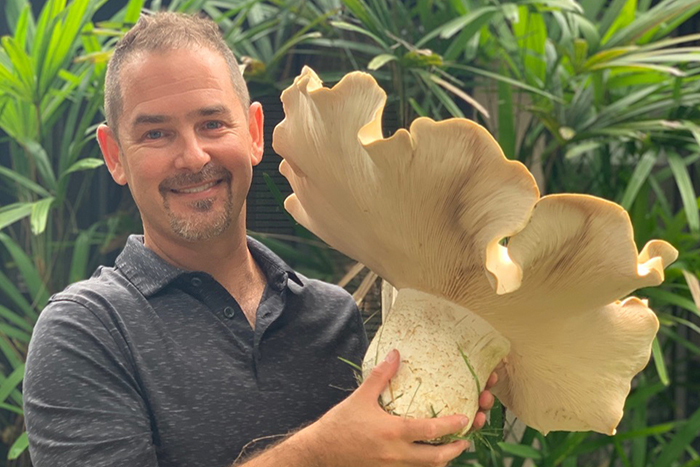 Matthew Smith, a UF associate professor in plant pathology and speaker at the event, holds a large mushroom. (Photo courtesy of Erin Smith)

João Araújo finds zombie ants fascinating — not just because of their parasitic situation, but because they can be found in your backyard.

“I found one last week literally by my door,” said Araújo, a postdoctoral researcher at the University of Florida who focuses on insect-related fungi.

“There’s a palm leaf that goes up near my back door and hanging on this leaf was an ant with the fungus coming out of the head,” he added. “So this is really common.”

Araújo and other experts will discuss zombie ants and more fungi-related topics at the Florida Museum’s virtual “Mushrooms with the Museum” event on Sunday. The museum is partnering with Florida Academic Lichen and Fungi Enthusiasts League, a local mycology club.

Three hundred people witnessed a mushroom presentation the museum hosted in August. While that audience was introduced to the basics of mycology, while experts Sunday will discuss lichens and insect pathogens specifically.

Matthew Smith, a UF associate professor in plant pathology and curator of the university’s fungal herbarium, said his goal is to capitalize on the growing public interest in fungi.

“They don’t learn about them in school,” Smith said. “They tend to not be covered too much.”

Listen above: Expert Laurel Kaminsky talks about the definition of a lichen and what makes them special in the study of fungi. (Marlena Carrillo/WUFT News)

Smith said the presentations being virtual because of the pandemic has helped more people to interact with fungi. Still, he said, there’s no substitute for engaging with it in the outdoors.

“I really like going on a walk in the woods and showing people actual fungi,” Smith said.

Smith said because many plant pathogens kill the food people eat, it’s important that experts learn how to better control them.

Araújo, the resident expert on cordyceps, or the parasitic fungi that infect insects, said the cataloging of fungi – what he calls “basic science” – is the only way to benefit from them.

“We cannot actually apply something we don’t know,” said Araújo, who is based in the UF School of Forest Resources and Conservation. “It is really important – and really cool.”

He said zombie ants are one example in how fungi manipulate a species’ behavior, making them die in a precise location where the fungi can grow and disperse best.

Araújo said these fungi are a visible example of evolution. The growing interest with them is even evident when he shows his 3-year-old daughter a glimpse into his work.

“When I show her these things, like a zombie ant in the back of our bedroom or a spider with spikes of fungi coming out, she gets really fascinated,” he said.

Laurel Kaminsky is the museum’s Lepidoptera digitization coordinator, and an expert on lichen, which she described as a kinship between a fungus and green algae or bacteria. Kaminsky said she hopes to “present lichens in a way that people can go out and say, ‘Wow, there’s these different colors. There’s these different shapes. There’s a lot of intrinsic beauty to them.”

Smith also said many people who are interested in fungi might not be aware of the things happening around them. He likes to compare it to birdwatching.

“People have birds around them all the time, and they may just not know what the birds are doing or what the species are,” Smith said. “Once someone teaches them, then they begin to observe a lot more.”

Marlena is a reporter for WUFT News who can be reached by calling 352-392-6397 or emailing news@wuft.org.
Previous The Point, March 4, 2021: The Paths For Proposed Florida Toll Roads Are Shifting
Next Attorneys Representing Families Of Killed UF Students Hold Press Conference On Pedestrian Safety