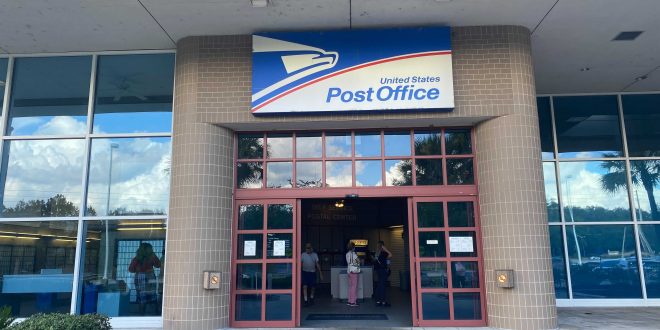 Amy Owen, like many people, has worried about a lot this year. With Election Day less than a month away, she took time last week to rid herself of one concern and drop off her ballot directly with the U.S. Postal Service.

“I am just worried about the ballot getting lost on the way from my mailbox,” said Owen, who is registered to vote in Gainesville.

This is one of the main concerns among mail voters deciding on how to submit their ballot.

In trying to avoid public gatherings, many voters don’t want to stand in crowded voting sites on Election Day to submit their ballots and risk contracting the coronavirus.

The best option for people concerned first and foremost for their health is to submit their ballot through mail, whether that’s dropping it off at a nearby post office or just in their home mailbox.

Still, in a year as complex as 2020 when it comes to voting, skepticism and concerns remain about the process. Voters are concerned that their ballot might get in the wrong hands or even get lost on the way to be counted.

Owen said even as she does trust the mail-in voting process, she feels more comfortable being the one to drop off her ballot at the safe box.

“I want to minimize the amount of people having contact with the ballot,” she said.

County-level public officials in Florida have been working to maximize election involvement by reinforcing the security and reliability of the mail voting process.

Wesley Wilcox, Marion County supervisor of elections, said he is concerned about misinformation and disinformation over mail voting.

To keep voters informed, Wilcox started a system in Marion County that provides all voters a QR code along with their ballot. Scanning the code will quickly sign you up for push technology to inform you through text or email when your ballot has been received and accepted.

Wilcox ensured that the vote by mail process is reliable, as it is overseen by capable and trustworthy officials who will ensure the integrity of the election.

“I think the most powerful endorsement I can give of vote by mail is: I vote by mail,” Wilcox said. “I had the ballot mailed to me at my house, I voted it at my house, I dropped it back in my mailbox, and I completed the entire round trip in six days.”

Wilcox said he expects 25% of the county’s voting population to vote by mail; 35% through early voting sites; and the remaining 40% to vote on Election Day. He hopes to reach a county record of around 82% of registered voters participating in the election.

According to the Florida Division of Elections, over 4 million mail ballots have been sent out in the state of Florida and over a quarter of those have already been returned for counting.

With a month still left until Election Day, there have already been 2 million more ballots sent out for mail voting during this election than the total mail-in ballots submitted in the 2016 election.

This significant shift in voting methods brought upon some tension to the 2020 election.

Throughout the presidential campaign, President Donald Trump has publicly expressed distrust of the mail voting process numerous times, leading to concern on the part of some Americans about the security and transparency of mail voting.

During the first presidential debate, Trump explicitly expressed his objection to mail-in voting by claiming carriers are “selling ballots” and sending millions of “unsolicited ballots” all over the country.

Following the president’s claims, Republicans seemed more skeptical toward mail voting than the opposing party. Even though only about 30% of the registered voters in Marion County are affiliated with the Democratic Party, they requested nearly 45% of the mail ballots sent out this election.

While it may seem simple, mail-in ballots can cause some confusion to first-time voters.

Wilcox said the main problem so far has been ballots sent out without a signature on the back.

Election officers contact voters who forget to sign the ballots. Such an oversight can be fixed,  but it delays the process. Depending on when the ballot was received, there may not be enough time to have the ballot ready.

Election supervisors urge voters to carefully read all instructions when filling out their ballots to avoid confusion and to submit their vote as early as possible.

TJ Pyche, an Alachua County elections office spokesperson, said it’s most important to make sure you drop your ballot to their office well before 7 p.m. on Election Day.

“This doesn’t mean you put it in your mailbox that day,” Pyche said. “It needs to have been delivered and ready to be processed by that time.”

There is a transportation time of up to seven business days from the moment the ballots are dropped off to when they are delivered to be processed.

Pyche suggests that mail voters send out their ballots at least a week in advance — meaning Oct. 27 this year — to be sure there is enough time to have their vote count.

Mail ballots can be requested at your local election office at any time before the deadline on Oct. 24.

Carolina is a reporter for WUFT News who can be reached by calling 352-392-6397 or emailing news@wuft.org.
Previous Alachua County Commission Discusses COVID-19 Emergency Orders
Next Oct. 14, 2020: Morning News In 90

Officials are starting the redistricting process after the 2020 Census, and for the first time, …