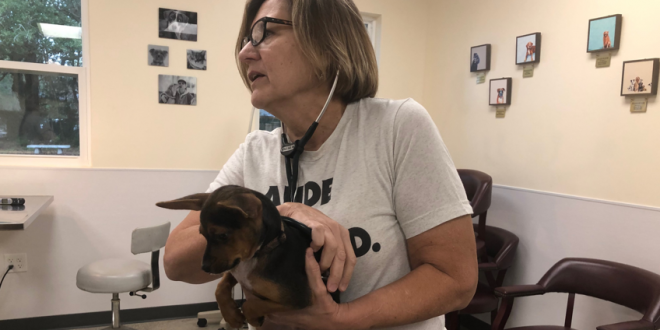 When Dawn Putman, 52, was homeless in Gainesville for 18 months, her now 9-year-old bulldog, Tasha, was more than just her companion – she was her guardian and best friend.

Putnam knew she could not afford puppies if Tasha got pregnant, and she couldn’t afford the spaying treatment, which cost anywhere from $100 to $300.

St. Francis Pet Care Clinic, located in downtown Gainesville, offered Putnam help. The clinic has received grants from Florida Animal Friend, a non-profit aimed at lowering the number of stray dogs and cats, for three years. In February, it received $14,800 – the largest grant yet.

“I’d say we really noticed there was a stray animal problem when we had the distemper outbreak in 2006,” said Natalie Isaza, one of the founding veterinarians at St. Francis.

Because of the coronavirus pandemic, the clinic has closed but plans to reopen on May 5. Before closing, St. Francis President Dale Kaplan-Stein said he made sure all clients in good standing received heartworm prevention medicine to last them until the end of May.

In addition, the clinic is offering telemedicine appointments, Kaplain-Stein said. Clients can call in and upload a picture of the pet for the veterinarian to look at.

“These over-the-phone appointments allow us to provide the necessary care pets need while upholding the proper social-distancing guidelines,” she said.

The clinic has stopped spaying, neutering and performing other elective surgeries.

The novel coronavirus has infected some zoo animals in the U.S. In Gainesville, the Santa Fe Teaching Zoo remains closed “out of an abundance of caution,” according to its website. But no animal deaths linked to the virus have been reported.

Also, there is no evidence that pets can transmit the virus to human beings, according to the Centers for Disease Control.

But other fatal epidemics have occasionally struck the stray animal population in recent years, including the canine distemper virus, a disease that domestic and wild dogs, as well as big cats, can get if they are not properly vaccinated when they are young.

“As we began to react to it, we got ahead of the curve,” Isaza said. “Thankfully, members of the veterinary community began to realize, like us, that there is a real problem in terms of access to affordable care.”

Following the outbreak, Isaza and fellow veterinarians conducted a study that showed that a lot of the animals that were brought into the shelter from low-income counties did not have the necessary vaccinations.

Since the clinic opened in 2007, Isaza and her colleagues have offered free or low-cost vaccination services. But funding was always a challenge, she said.

Isaza said the grant requires that the veterinarians use it solely for spaying and neutering for low-income pet owners, so it tackles the root of the problem.

“In the last 10 years, we have decreased the stray pet population, leading to a lower number of animals coming through the shelter and a higher live release rate,” Isaza said. “Anything we can do to help lower the stray pet overpopulation problem in our county is work worth doing.”

Ella Thomas, 62, of Gainesville, has three dogs. She said she used to have just one, but she can’t help but rescue them. She said if any one of her dogs got mammal or testicular cancer, a side-effect of not being spayed or neutered, she could not afford their care.

“I am on a fixed income, so it is grants like these that have allowed me to keep my babies,” Thomas said.

The grant is funded by a special Florida Animal Friend license plate, which costs buyers $25.

Non-profit organizations that are registered with the Florida Department of Agriculture and Consumer Affairs, with 501(c)(3) status and a pre-determination or decision letter from the IRS, or a government animal control/services agency can apply for the Florida Animal Friend Grant.

Back at the clinic last month, Putnam waited for Tasha to get spayed.

“Tasha’s role in my life goes beyond ‘dog.’ She’s my best friend, my life partner, my child,” Putnam said. “I have some emotional issues, so she is my emotional support animal as well.”

Putnam said if she did not have aid from the programs offered through the grant, she would not keep Tasha because she would not want the animal to suffer in any way.

Nicole Bowen is a reporter for WUFT News who can be reached by calling 352-392-6397 or emailing news@wuft.org.
Previous Eastside High Culinary Students Among Finalists In Postposed NASA HUNCH Challenge
Next An Alachua County COVID-19 Portal Matches Volunteers With Those Needing Help

Plenty of Pit Bulls, a Gainesville nonprofit organization that specializes in placing at-risk shelter dogs in foster care, is looking for volunteers to provide homes for its rescued dogs. The group is hosting a fundraising event Oct. 2 from 2 p.m. to 6 p.m. at First Magnitude Brewing Co., located at 1220 SE Veitch St. All proceeds go toward the dogs’ medical care and other needs.