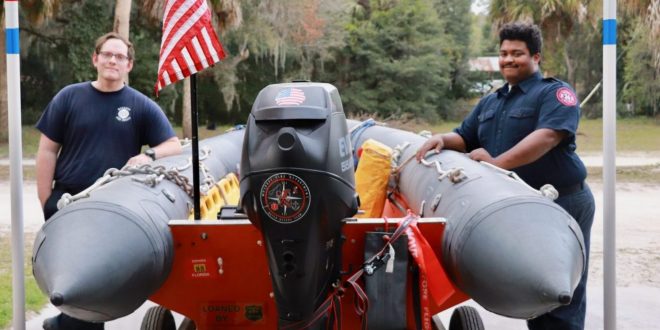 If you were drowning at Lake Santa Fe a year ago, your life might have depended on a stranger’s boat.

Today, the Melrose Volunteer Fire Department’s new water rescue vessel, Marine 249, can be in the water in five minutes and the crew no longer depends on the courtesy of the lake residents to respond to emergencies, said Joshua Florence, MVFD public information officer.

The reconstructed Avon SR-4 and its crew are the first official water rescue team the area has ever seen, Florence said. Recent water emergencies, such as that of the 22-year-old man who drowned trying to save his dogs in February 2019, motivated MVFD and community advocates to fund the addition of the water rescue.

“That’s what really sparked it all,” said Florence, of the man who drowned in 2019. “There was a few incidents before that, but that was the line in the sand that we needed to do something. It’s always easy to talk about something, but it’s hard to do it.”

Marine 249, its name being derived from its call sign, was a donation by the Florida Forest Service in March 2019 and previously served the U.S. Army Vessel New Orleans, Florence said. Over five local businesses donated equipment that MVFD members and volunteers used to make Marine 249 operational.

“We put a lot of our own hours on it,” Nazario-Casey said. “It feels good to provide this service to a community that needs it.”

Five of  MVFD’s members received over 200 hours each of training and the department plans to train remaining members to make water rescue available 24/7, Nazario-Casey said. As of now, the crew only responds to medical emergencies and will not provide towing services.

“It’s a dangerous lake,” McGuire said. “Especially for people who don’t live on the lake…people can really get caught off guard because it changes so quickly.”

Tatiana is a reporter for WUFT News who can be reached by calling 352-392-6397 or emailing news@wuft.org.
Previous The Point, Feb. 12, 2020: Why The Florida Boxing Commission Lifted Its Ban On Elbow Strikes In Sanctioned Matches
Next Residents Rally As Decision Nears On Seven Springs’ Request To Pump From Ginnie Springs