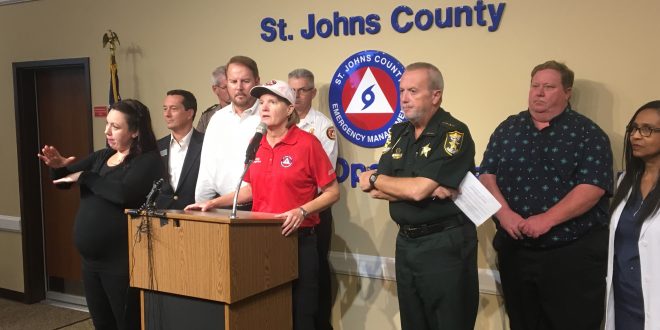 St. Johns County is well prepared for Hurricane Dorian’s push along Florida’s Atlantic Coast that’s expected to continue for much of Wednesday.

Starting at 8 p.m. Tuesday, St. Johns County implemented a curfew for Evacuation Zones A and B in St. Augustine and St. Augustine Beach.

“That curfew is there to keep people home or off the streets. We’ll use common sense with it because we know not all situations are the same,” said St. Johns County Sheriff David Shoar. Shoar stressed situational awareness, reminding residents to watch for standing water even after the storm.

“It’s important to remember we are still under a hurricane warning for all of St. Johns County. This is not the time to get casual or lower our guard as we move forward,” County Administrator Michael Wanchick said.

Chuck Gillingham lives in a riverside neighborhood between St Augustine Beach and Vilano Beach where the county has issued a mandatory evacuation order.

“All we have done for the past four days is to communicate and talk to each other. A lot of harmony. My friends in Vilano help friends downtown,” Gillingham said. “The storm surge is obviously the big worry since the ocean is right there and we got a king tide.”

It cost him more than $125,000 to repair and replace his windows and ceiling after Hurricane Irma. He said that’s why he piled up sandbags and covered tarps, doing all he could to protect his home from Hurricane Dorian.

Quan is a reporter at WUFT News who can be reached by emailing news@wuft.org or calling 352-392-6397.
Previous Hurricane Dorian Leaves Terrible Damage And Stranded Residents As Rescuers Scramble To Help
Next The Point, Sept. 4, 2019: Florida’s First Coast And Certain Inland Areas Will Feel Dorian’s Effects For Much Of Today