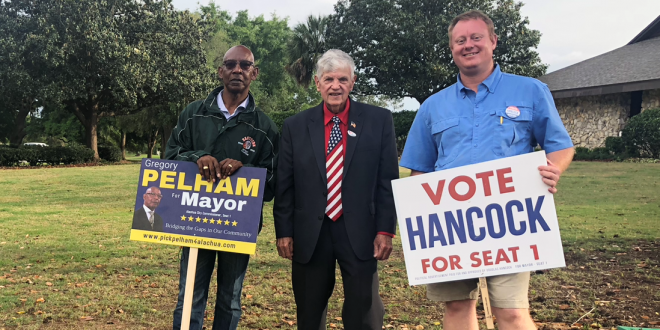 City of Alachua Elections Results Are In

City of Alachua elections were held Tuesday to decide both the Mayoral and City Commissioner seats resulting in a runoff between Pelham and Coerper for mayor, and Wilford with the Commissioner seat 2.

Polls were open from 7 a.m. until 7 p.m., followed by an 8 p.m. meeting at which votes were counted and shared in real-time. Candidates for the mayoral seat included incumbent Mayor Gib Coerper, Gregory Eugene Pelham Sr. and Douglas Hancock.

Tuesday, voters stood outside the precincts, supporting their prospective candidates. Most said they believe voting is their civic duty.

“In order for a democracy to work, two basic responsibilities are voting and serving on jury duties,” said Randy Dexter, 36, “If we’re not being a part of the process, it’s not going to work in my humble opinion.”

Dexter has lived in Alachua for 15 months and said for him, it was about getting out and supporting the candidates, such as Coerper, who have been so welcoming and kind to him and his family.

Tabitha Jenkins, 40, held signs in support of candidate Pelham outside the precinct since 6 a.m. Tuesday.

“When I kind of see communities that are broken in certain places, when I kind of see those disconnects then, you know, I might not be able to contribute much, but I do what I can do,” Jenkins said.

The results were close for Pelham, with 385 votes, and Coerper, with 445 votes, resulting in a runoff vote that will be held from 7 a.m. until 7 p.m. on Tuesday, April 30, at the Legacy Park Multipurpose Center, the Cleather Hathcock, Sr. Community Center, and the Clubhouse at Turkey Creek.

Coerper wasn’t shocked by the results.

“Usually when there’s three people that are well-known in the community, you know, it takes away from others,” Coerper said. “It’s kind of normal in a small community. I’m not surprised by it.”

Hancock, winning 302 votes, was disappointed with the results.

“I think it [the campaign] went well,” Hancock said. “I wasn’t able to devote as much time as last year, and I think you can see that in some of the results.”

Hancock said he wishes he could have done better; however, he said, this is what the voters chose. He does not plan to run again at this time but rather will spend the time focusing on his family and his business.

While Hancock takes time off, the other candidates will be back out campaigning for the next three weeks.

Pelham feels optimistic after the results and said he will continue to campaign until the runoff vote.

Incumbent Wilford won the commissioner seat by about 58 percent of the votes, which ended with 627 votes for Wilford to Dixon’s 456. Wilford said he was pleased with voter turnout this year.

“I spent 20 years in the Navy, and I served my country so we all can vote,” Wilford said. “I’m just proud that they turned out to vote.”

William Boyett, chief deputy supervisor of elections for Alachua County, said 836 of the city’s voters – 12.4 percent – voted in the 2018 city elections. This year, turnout increased with 1,132 votes representing 15.8 percent of registered voters in the city.

Emily Long is a digital reporter for WUFTV News. Follow her on Twitter @emlo_ufl. You can reach her at 407-704-0272.
Previous Florida Considered Public Money For Troubled Executive
Next NTSB Says 3 Children In Deadly I-75 Crash Near Gainesville Were Ejected Despite Wearing Seatbelts