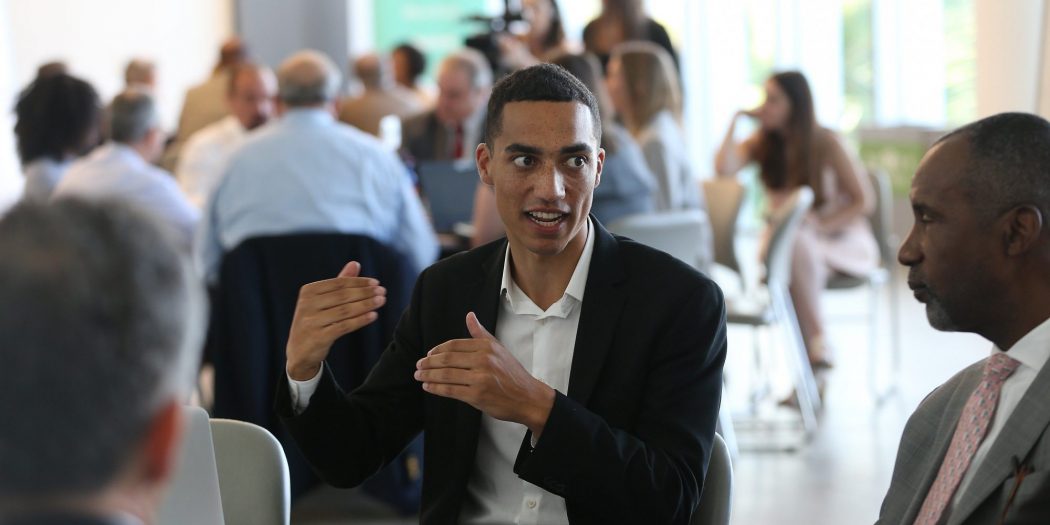 Florida Influencer Chris Caines of FIU leads a breakout session on transportation and infrastructure on Tuesday, November 13, 2018 during the Florida Priorities Summit at the University of Miami. (Photo By Patrick Farrell/Courtesy of the Miami Herald)

Underpaid bus drivers, cutbacks on services and decaying bus stops are some of the issues the Gainesville Regional Transit System has faced in the past year.

In a survey of 50 influential Floridans for a project on setting the agenda for Florida’s future, 40 said increasing resources for buses and local mass transit should have been a top priority for candidates in the recent election, according to the Miami Herald.

On Tuesday, many of those influencers met in Miami to discuss solutions to five issues deemed most pressing by the public: healthcare, transportation and infrastructure, education, the environment and gun safety.

The influencers broke off in discussion groups to tackle these topics during the first day of the Florida Priorities Summit hosted by the Miami Herald, el Nuevo Herald and the Bradenton Herald.

Five were given the task to find a solution to the rising concerns about transportation and infrastructure.

Michael Finney, president and CEO of the Miami-Dade Beacon Council, said the way to combat this issue is to change people’s habits and not depend on new technologies. He went on to say that depending on public transportation is more convenient, saves time and leads to a healthier life style.

“We need to get people excited for public transportation,” he said.

Margaret Lezcano, managing director of UBS, and Chris Caines, executive director of the Miami Urban Future Initiative, said that some ways to pull people into public transport would be to upgrade and buy buses, expand routes and improve bus stops.

However, Finney said that course of action would only address the symptoms and not the larger problem.

Caines believes that Floridians lack the desire to use public transportation, and it’s out of history and habit.

“Florida is a sunbelt state,” he said. “A lot of communities grew up around the car. When you start from a place of sprawling suburbs and car ridership and then after the fact build in mass transportation it is challenging.”

The panel decided that there were questions that needed to be answered that would lead to solutions.

Some of them being: How will we create inter-mobile apps that display information from different types of transportation; How will we embrace smart city infrastructure; How can we redirect toll road revenue for transit?

During the final day of the summit, the panel will share proposed solutions to the challenge.

While the panels talks and decisions fit a large county with bustling metropolitan areas, Caines gave some insight on what a small county like Alachua and a mid-size city like Gainesville is facing and what can be done.

Listen to the discussion here:

Devoun is a reporter for WUFT News who can be reached by calling 352-392-6397 or emailing news@wuft.org.
Previous What Happens After An Insulin Cost Spike? ‘People Suffer And They Die’
Next More Alachua County Students Vaccinated Against Flu With The Return of Flu Mist