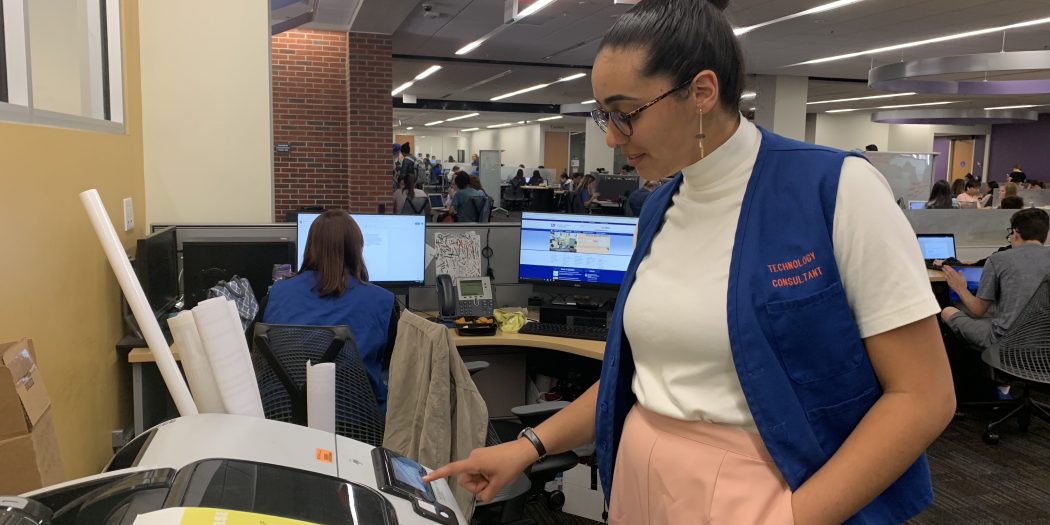 Sara Jampower wears a blue vest that reads “Technology Consultant” and roams around her university library’s basement floor. She stops and chats with almost every student she encounters; she could easily win a popularity contest here.

Sara, a 20-year-old public relations major, returns to the employee desk at the University of Florida’s Marston Science Library. Her eyes widen as she spots two of her friends. They arrive with paper plates heaping with rice, chicken and potatoes from Fast-A-Thon earlier in the evening.

Sara, who describes herself as “super Muslim,” missed the Islam on Campus event because of work.

But her religion is important to her. She was born to Palestinian parents from Jordan and grew up in Naples, Florida.

After her parents divorced, her father moved back to Jordan with her sister, but Sara stayed with her 6-year-old brother and mom, a paralegal in Naples who in 2016 did the unthinkable for many Muslims: she voted for Donald Trump.

Muslim Americans were offended by what they perceived as Trump’s anti-Muslim rhetoric during his campaign. But Sara’s mother saw Trump as a candidate who was in line with her conservative values.

Sara says she was upset by her mom’s decision to vote for Trump but says it’s pointless to discuss.

“My mom is a grown woman and can do what she wants,” she says. “I’m sure she has regrets now that she’s seen who she voted for.”

Sara says she does not identify with a political party. Democrats as well as Republicans resonate with her.

Like her family, Sara agrees with GOP policies that reduce government spending for welfare programs. Too many people, she says, just want a free ride.

“I believe in helping those in need, but not as a scapegoat or charity case,” she says.

Sara was also influenced by her high school classmates who she says were predominantly Republican.

But on the other hand, she can never vote for anyone who is pro-Israel. She strongly disagreed with Trump’s decision to recognize Jerusalem as the capital.

She says it’s hard to have conversations that mix politics and religion.

In 2016, Sara was so conflicted about how to cast her vote that she avoided the polls.

“In the last election, I didn’t know whether to vote for Hillary or Trump, so it almost felt better not to do anything,” Sara says. “I feel like my vote doesn’t make a big difference I guess.”

But this year, things are different. College changed everything.

Sara arrived at the University of Florida and suddenly, she was exposed to other ways of thinking. She hears about different political opinions through campus organizations like the College Democrats and Young Americans for Freedom.

She plans to vote for Andrew Gillum for governor.

She likes Gillum’s push for better education – America, she says, has fallen behind other countries where college is free. She also likes that Gillum embraces diversity.

As a Palestinian American, she wants people to be accepted for who they are. The Republican Party does not always embrace diversity, she says. GOP views have become too extreme for her to vote for one.

Social media platforms, like Snapchat, have also influenced her to vote this time around. Every time she opens her phone, she finds another message from a celebrity urging her to vote.

She admits she wasn’t well-informed or ready to vote in the last election, but she certainly knows what to do this time.

Florida Votes 2020: What To Expect In The Union County Primary Election

Florida Votes 2020: What To Expect In The Suwannee County Primary Election

Florida Votes 2020: What To Expect In The Putnam County Primary Election