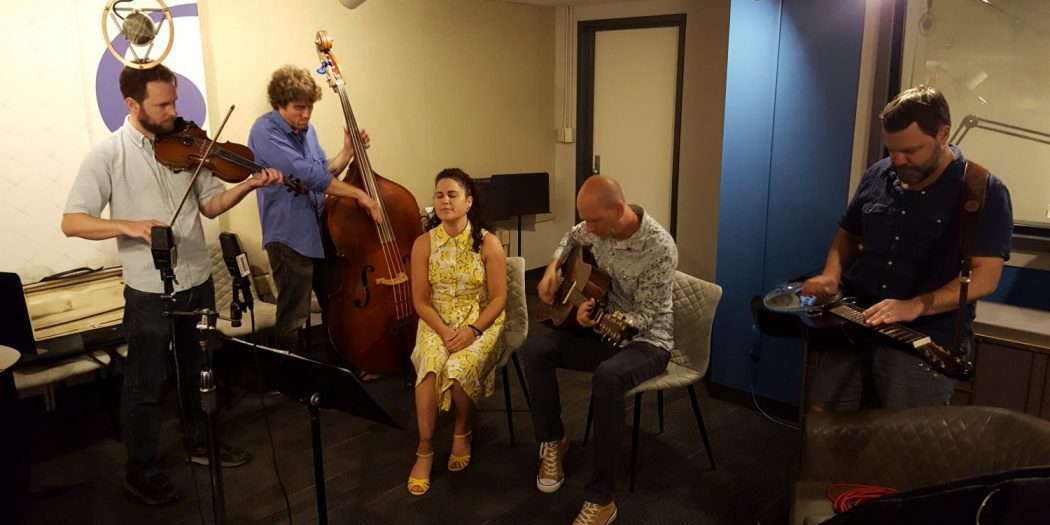 WUFT’s Morning Edition host, Glenn Richards, spoke with the members of Pine about their forthcoming debut CD and Free Fridays concert at Bo Diddley Plaza in downtown Gainesville from 8 to 10 p.m. on Friday, July 20, 2018. They also did two exclusive performances live in the WUFT Classic performance studio!

On describing Pine’s music as Americana or a throwback, Phoenix said: “I haven’t played music in twenty something years and so it’s not really a throwback; I think I was stunted about 20 years ago.”

Phoenix continued, “I’m just kinda there and luckily it’s, like, appropriate for nowadays as well.”

Liberty is also well-known as a business woman and activist. She started the Gainesville green building supply store INDIGOGreen and supports her mother, Heart Phoenix, in the charity organization, The River Phoenix Center for Peacebuilding.

Glenn Richards is Operations Coordinator and local host for Morning Edition on WUFT-FM. His background includes 30+ years of radio in South Florida as an air personality, promotion director, and morning show producer (WSHE, WZTA, & WFLC). His previous education includes a Bachelor of Science in Communication from the University of Miami where he was also general manager of WVUM-FM. Upon his arrival in Gainesville in 2006 to pursue a telecommunication master’s degree at the University of Florida College of Journalism and Communications, he worked as an air personality at WRUF-FM (both Rock104 and Country 103.7 The Gator). One of Glenn’s passions is local music. Since 1990, he has produced and hosted local music programs in both South Florida and Gainesville, playing demos and independent releases from unsigned artists, many of whom went on to national prominence including: Marilyn Manson, Sister Hazel, For Squirrels, Matchbox 20, Saigon Kick, Mary Karlzen, Nil Lara, Hundred Waters, and more.
Previous New Alachua County Youth Program Aims To Make Reading More Relatable
Next Unvarnished: Story Summit At Heartwood Soundstage

Not even a global pandemic can stop Gainesville theater. The Hippodrome Theatre staff used a …