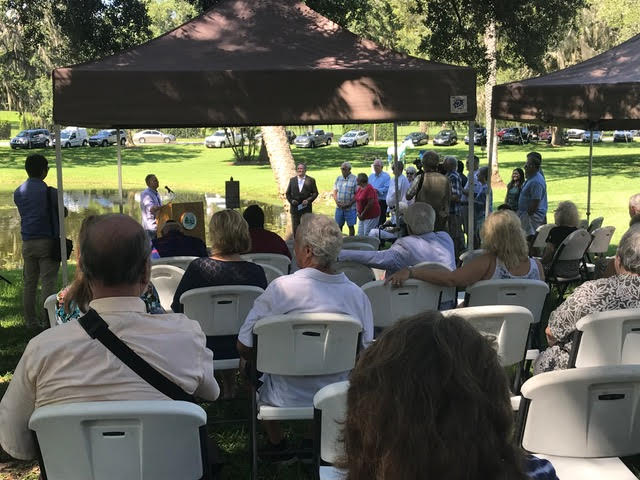 Three years after his passing, retired Ocala City Manager Scotty J. Andrews is memorialized by a park located in the heart of Ocala’s historic district. The City of Ocala Recreation and Parks Department held a ceremony to dedicate the park to Andrews on Friday at 10 a.m. The park is located just down the street from Andrews’s home at 1104 SE 12th St.

About 50 people gathered near the park’s pond for the ceremony. The parks department unveiled a plaque displaying Andrews’s name after community members took turns at the podium telling stories about Andrews and the work he did to make the city a thriving community.

Coming from humble beginnings, Andrews grew up as the son of a cattle rancher in Levy County. He graduated from the University of Florida and was a dedicated Gator fan, said his family during their speeches.

In 1958, he started his career with the city as a member of the survey crew in the city engineer’s office. He became a survey crew chief four years later and became an assistant city manager by 1975. He was appointed the city manager in 1979 and served the city for 41 years before retiring in 1999.

According to a press release from the Ocala Recreation and Parks Department, during Andrews’s time as city manager, Ocala experienced substantial growth. The city received the National Civic League’s All-America City award in 1995, which recognizes communities that encourage their citizens through civic engagement, inclusiveness and innovation to make a difference in local issues.

Andrews was named a city manager emeritus within the state of Florida with more than 20 years of tenure. Andrews passed at the age of 80 on April 22, 2015.

Andrews’s son, Scott Andrews II, said that a lot of his decisions were made based on the future of the community rather than the present.

Andrews II said the park represents who his father was as a person because it encourages the community to come together and enjoy the outdoors and each other’s company.

“I think it is at the heart of a very vibrant neighborhood,” Andrews II said.

Joe Cone, a retired assistant city manager for Ocala, worked with Andrews for about 30 years. Cone said Andrews was an excellent leader who always encouraged his employees to do better, was a mentor for so many people and influenced them in their professional endeavors.

“Everybody that worked with Scotty as an assistant or intern has gone on to bigger and better things,” Cone said.

As for Cone, he always channeled his inner Scotty when making difficult decisions at work.

“I’ve often asked myself when I am perplexed, and I don’t know how to handle a situation, what would Scotty do?” Cone said.

Outside of work, Cone said Andrews liked to have fun. Cone recalled having many parties at the Andrews residence.

“He would even go golfing on Friday afternoons, using 4 hours of vacation time,” Cone said.

“He loved to have Kool-Aid on the front porch and solve the world’s problems,” Batten said.

But aside from having fun with his community, Batten said Andrews liked to collaborate with his constituents on matters affecting the city. He said he wasn’t confrontational but wanted people to take responsibility for their decisions.

“His motto was, ‘You can accomplish anything as long as you don’t care who gets credit for it,’” Batten said.

The Arc of Alachua County is short 69 DSPs and is running an $11 million budget deficit – its largest in its 55-year history, according to a top organization official.