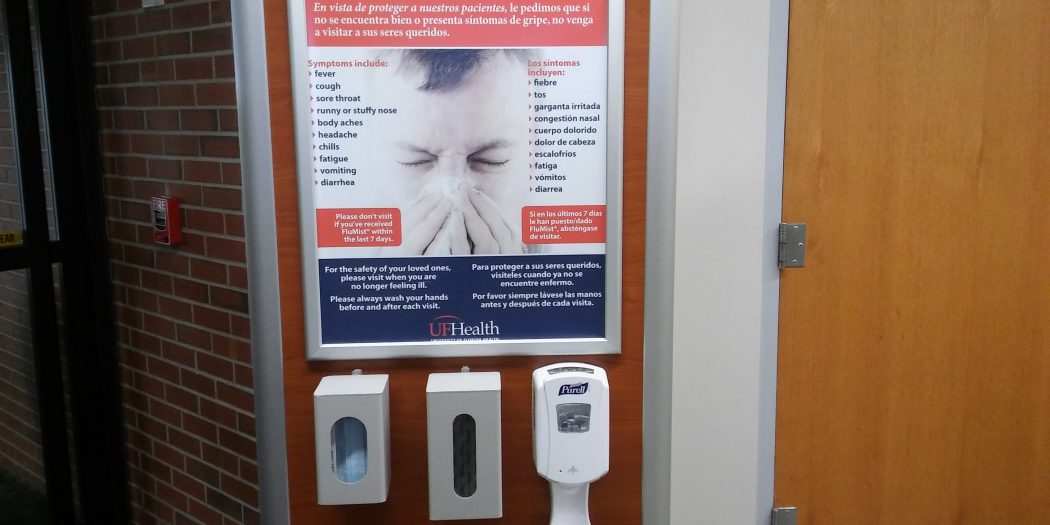 How Is The Flu Affecting Hospitals And Doctors’ Offices In Gainesville?

It can start with something as simple as a fever or a sore throat and this year it’s left thousands of people around the country hospitalized. The 2017-2018 flu season has been one of the worst in recent years, and like the rest of the country, Gainesville is feeling its impact.

This month, 75 new patients have been admitted into Shands because of the flu. Last month the hospital had 219 new flu patients.

Shands hit its peak number of patients during the last week of January, but that doesn’t mean the flu season is over. Far from it, in fact.

“Even though the numbers are declining, they’re declining from Mount Everest,” said Iovine. “We are still in a really active phase of the flu. We could be bracing for quite a few more weeks of this.”

Shands isn’t the only hospital that is feeling the strain of this flu season. North Florida Regional Medical Center has also been severely affected.

North Florida Regional has so many patients they don’t have room for all them. So, patients like 87-year-old Dorothy Johnson have to sleep in the hall on stretchers while hospital staff rush by.

“Even when I pressed the call button everyone was so busy that no one came to help me,” she said.

Of course, not all medical facilities have been as heavily affected by the recent influx of patients. Places like Primary Care Physicians of Gainesville set aside part of their schedule every day to accommodate for walk-in patients suffering from flu symptoms.

However, a local shortage of flu tests has impacted Primary Care Physicians of Gainesville. “We’ve run out of our rapid flu tests like many other people in town,” said Dr. Elizabeth Sanders, a doctor at the practice.

This means that instead of being able to instantly diagnose patients, doctors are forced to wait for the results from viral cultures sent to the lab for testing. This makes it hard to determine which, if any of the active strains of the flu a patient is suffering from.

“In a day, over 30 percent of our patients show symptoms of the flu, but only 10 to 15 percent test positive,” said Sanders.

Hospitals like Malcom Randall VA are curbing the spread of the flu by implementing new health measures. “We have a mandate that all employees who haven’t been vaccinated have to wear face masks,” said Dr. Gary Wang, an infectious disease doctor at the VA.

The VA hasn’t been affected by the flu test shortages that plague the doctor’s offices in the area. It also hasn’t seen a huge number of flu patients like Shands and North Florida Regional. Wang attributes this to a large number of veterans that are vaccinated.

“The veteran vaccination rate is much higher than the general public,” said Wang. “We offer programs at the hospital that educate the veterans on the shot and then they can get it administered for free at the hospital.”

There’s no way to guarantee that you won’t get the flu but being vaccinated can have a pretty significant impact. Especially for children and adults over the age of 65, since these two age groups have been the most affected demographics.

“It’s not too late to get vaccinated,” said Iovine. “Even if you do get the flu, the severity of your flu can be greatly decreased if you’ve been vaccinated.”

William is a reporter for WUFT News who can be reached by calling 352-392-6397 or emailing news@wuft.org.
Previous Where UF and Santa Fe College Stand In This 2018 Report on National Campus Safety Rankings
Next Morning News in 90: Feb. 15, 2018