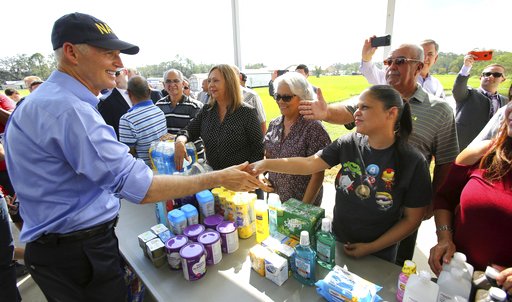 Florida Governor Rick Scott thanks Osceola County volunteers who are assisting with the relief effort for Puerto Rico in the wake of Hurricane Maria, during a visit to the Osceola County Services warehouse, in Kissimmee, Fla., Wednesday, Sept. 27, 2017. (Joe Burbank/Orlando Sentinel via AP)
Home / The Rundown / Florida Governor Loses In Court Battle Over Nursing Homes

A judge has ruled there is not an immediate danger that gives Florida Gov. Rick Scott the authority to order nursing homes to install generators.

An administrative judge on Friday ruled against the Scott administration after nursing homes and assisted living facilities challenged emergency rules put in place after Hurricane Irma.

Those rules required nursing homes and assisted living facilities to have generators capable of providing backup power for four days.

Scott called for the rules after residents at the Rehabilitation Center at Hollywood Hills died in the days after Irma wiped out power to much of South Florida.

The 1st District Court of Appeal last week sided with the governor in a separate legal challenge.

The Associated Press is a wire service to which WUFT News subscribes.
Previous Harmony Reigns As The Currys Perform Live On WUFT-FM
Next Decrease In Ridership Affects RTS Bus System

The leaders of a Gainesville church say they are holding a conference this weekend to educate pastors, parents, and teens on how to love and accept everyone, regardless of their sexual orientation.