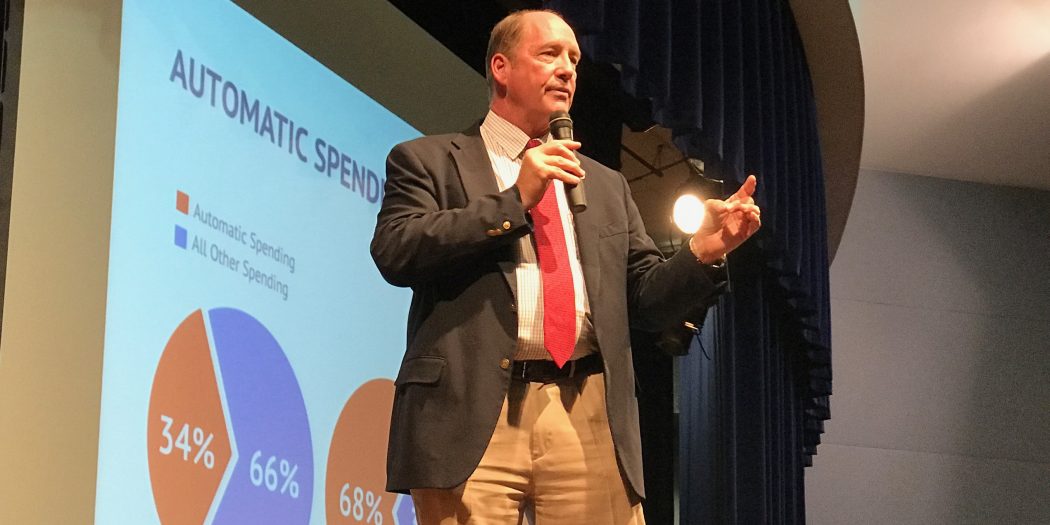 Rep. Ted Yoho and Gainesville Indivisible, the local chapter of the national group, once again teamed up to host a town hall Monday evening.

The often contentious, rowdy crowd reacted to many of Yoho’s controversial views on the topics addressed at the town hall including healthcare, gender-neutral bathrooms, Planned Parenthood, medical marijuana, climate change, tax reform and Russian interference in the 2016 election.

Yoho’s fourth town hall of the year, the event was held at Abraham Lincoln Middle School where more than 500 constituents attended.

In March, Yoho’s first town hall hosted at Countryside Baptist Church in Gainesville brought with it a heated crowd and culminated in one altercation between two protesters.

Protestors sing "Quiet" by MILCK – a song that was written for the Women's March on Washington @WUFTNews #YohoTownHall pic.twitter.com/WcR8ZgjLsw

Joy Pitts, the chapter leader for Indivisible Gainesville, said the reason Yoho has had so many town halls compared to other republicans is because he’s open to conversation.

“He has a good relationship with his constituents,” Pitts said. “We have opposing political views, but he’s open to meet with us and hear our voice.”

Several constituents at the town hall asked Yoho about healthcare. They wanted to know about his recent stance as part of the House Freedom Caucus to not support Speaker Paul Ryan’s attempt to replace the Affordable Care Act with the American Health Care Act (AHCA).

Yoho said he does not believe the federal government should be responsible for providing healthcare, but the proposed bill did not go far enough.

“I sat with somebody in my leadership and I said, ‘What you guys are doing is not a full repeal and replacement of the Affordable Care Act,’” he said. “I am 100 percent against what they’re trying to pawn off on the American people.”

Yoho says he does not believe the federal government should be responsible for providing public healthcare #yohotownhall @WUFTNews pic.twitter.com/f77s4B27HC

Diana feels that @RepTedYoho does not listen to his community. She says "it's like talking to a brick wall" @WUFTNews pic.twitter.com/y3pXBliwkR

John Pastori, a local business owner with 114 employees, said he agreed with Yoho. Although Pastori also supports the repeal of Obamacare, he thought this wasn’t the right way to do it. He said if something doesn’t change soon, he’s going to be forced with a tough decision.

“If I have to keep spending more money on health insurance for my employees, then I’ve got one of two options,” Pastori said. “That’s to go out of business or to start cutting back on employees and benefits.”

For others like Jenny Whener, who has two family members with pre-existing conditions, keeping Obamacare is personal. She said they never would’ve gotten healthcare without it.

Planned Parenthood was brought up by constituents, including one Williston woman who said support for the organization is also personal to her. She relied on Planned Parenthood for healthcare and birth control for most of her young adulthood.

Yoho defended his vote to defund the organization by saying he doesn’t believe the federal government should have the role of providing healthcare for everyone.

“This is not about women’s health,” he said, which was met with displeasure from much of the crowd. “My fight is with no taxpayers’ money going to any organization that does abortions.”

On climate change, Yoho denied it was caused by human activity. A local environmental scientist then asked a question that made the crowd give her a nearly 30-second standing ovation.

“Please explain why your opinion as a non-expert in the field is more valuable than empirical evidence supported by 97 percent of climate scientists who’ve spent their lives studying this?” she asked.

"Thank you for being here tonight. I disagree with you on almost everything," constituent tells @RepTedYoho. #yohotownhall @WUFTNews

The crowd also reacted favorably when a constituent questioned Yoho on his stance on gender-neutral bathrooms. The representative responded by stating there are “female bathrooms, male bathrooms and others.”

There were two topics that Yoho did agree with much of the crowd on —  Russian interference in the election and President Trump’s tax returns.

He said he wants the investigation of Russian interference to continue and, if need be, assign a special nonpartisan investigator. Concerning the President’s tax returns, Yoho said he changed his mind after he met with a constituent and he now agrees Trump should have to release them.

Yoho’s office plans to continue hosting town halls. The next town hall meeting is tonight at 7:00 p.m. at the Putnam County Commissioners Building in Palatka.