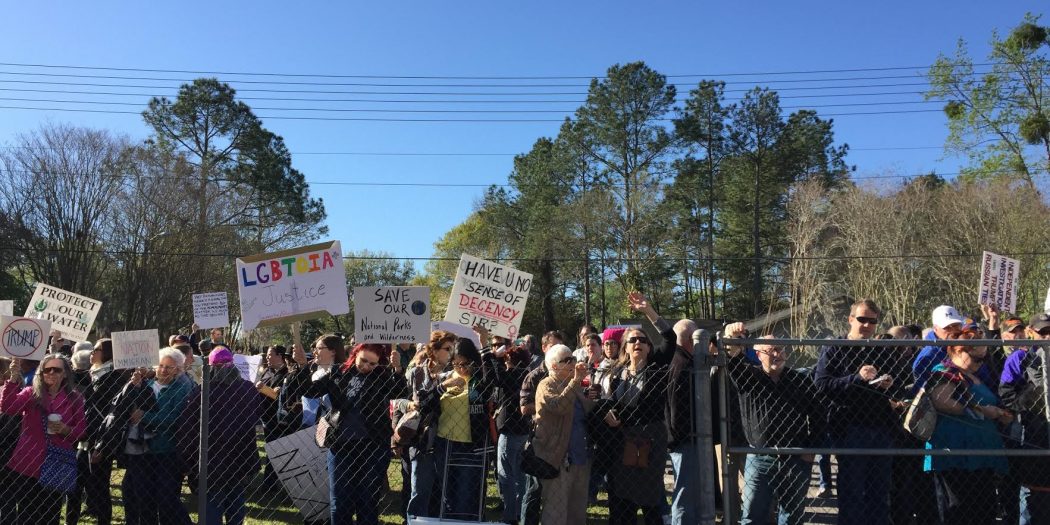 District 3 Representative Ted Yoho addressed a crowd Saturday morning at his first town hall of the year at Countryside Baptist Church. Protestors who could not get inside the church lined a fence around the property to have their voices heard. (Virginia Annable/WUFT News)

Protestors and supporters alike gathered to voice their opinions to their representative, District 3 Rep. Ted Yoho (R-FL),  Saturday morning, an event that ended with one man on the ground.

Yoho and Gainesville Indivisible, the local chapter of the national group Indivisible Guide aimed at resisting President Trump’s agenda, hosted a town hall Saturday morning at Countryside Baptist Church in Gainesville, his first of the year.

While inside, the event itself was organized and relatively tame, protesters outside rallied around their causes. Following the town hall, a Trump supporter fell to the ground after being hit by a protestor. Alachua County Sheriff’s Office deputies took a man into custody after talking with witnesses.

“They were chanting and talking back and forth [and] all the sudden that younger guy just cold-cocked him and he went right down on his back,” said Diane Drum, a Yoho supporter and Gainesville resident who witnessed the event.

Yoho also expressed his concern about the incident.

“My thoughts and prayers go out to anybody who got hurt. That’s the stuff we don’t want to see,” Yoho said. “That serves nobody good. I want to know who’s behind that and I want the law applied to them fully.”

Fights break out outside between protestors. @WUFTNews pic.twitter.com/YDjcP6sqmK

BREAKING: A Trump supporter was just punched outside fence. Suspect is being questioned by @AlachuaSheriff now. #YohoTownHall @WUFTNews

Deputies speak with one of the men involved in the argument. He threw the punch that knocked down the other @WUFTNews pic.twitter.com/lO55R9ewvT

The protester was among constituents who arrived at the venue as early as 6 a.m. hoping to get one of the 275 seats inside. Although doors were scheduled to open at 9 a.m., the room was filled by 8:15 a.m.

Those who did not get one of the seats inside remained behind a chain link fence at the edge of the property.

Protestor at @RepTedYoho town hall yelling "I'm an immigrant can I come in?" @WUFTNews pic.twitter.com/7VzpHj0vi5

“Tell me what democracy looks like!” chanted veteran John Fullerton to hundreds of protesters who were outside.

“This is what democracy looks like!” the crowd chanted back.

Protestors continuing chanting, hoping to be heard from outside #YohoTownHall @WUFTNews pic.twitter.com/rloQ0FeoCI

Hundreds of protesters yelled, waved signs and gave speeches in opposition to Yoho and President Trump outside the venue.

“What happens in that hall is almost secondary to what happens out here,” Fullerton said from the other side of the fence. “If we get enough people out here, then we have more effect.”

Chants of “No Trump! No KKK! No fascist USA!” and “Hey Hey! Ho Ho! Ted Yoho has got to go!” echoed throughout the crowd.

Fullerton voiced some concerns of these protesters, who were not able to fit inside the church.

“This is a private institution – a religious institution which is supposed to stay out of politics – that has fences around it and many ways to keep the crowd down,” Fullerton said.

Hosts of the event say security is a big concern. No standing room will be allowed, max of 275 seated people at #YohoTownHall @WUFTNews pic.twitter.com/MTAyZeFGKV

The event was originally scheduled to be held at Santa Fe College but, due to scheduling conflicts, was changed to Countryside Church. Fullerton, along with those inside the town hall, voiced concerns that it should have been held at a public venue.

Since taking office in 2013, Yoho said he’s hosted more than 40 town halls in-person and another 40 telephone town halls, but this was a first for many.

“When I asked ‘how many people is this the first town you’ve been to that I’ve done?’ I was shocked that it was about 80 percent of the room,” Yoho said. “I wasn’t feeling the love there, but I’m glad that they were there.”

Constituents raise their arms to form an X at @RepTedYoho claiming bipartisan support to repeal and replace #obamacare @WUFTNews pic.twitter.com/G6HwAfrOnx

Questions from constituents were written on pieces of paper and read by the event’s moderator, Marihelen Wheeler, Yoho’s Democratic opponent in the 2014 election.

“I think its the political atmosphere. Certainly there’s people out there who don’t like my stances.” Yoho said.

When he mentioned bipartisan support to repeal and replace Obamacare, constituents raised their arms over their heads and formed an “X” to show their displeasure with the statement.

“I don’t expect people to pay for my insurance,” Yoho said, followed by disapproval from much of the crowd.

Seth Smith, a veteran and chair for of the Veterans’ Affairs Committee for the Alachua County Democratic Party, disagreed with Yoho on many issues, but agreed on one thing.

“I’m very glad that he stated he’s going to completely oppose privatization of the VA,” Smith said. “We do not want privatization of the VA. Our doctors are specialized in the injuries that we sustain over in war. Now you’re asking civilians to learn how to treat PTSD when we already have doctors who are trained and experienced.”

On her arm this woman wrote "RESIST"&addresses concerns about the travel ban to Yoho saying it was against select religious groups @WUFTNews pic.twitter.com/nX8aK0racA

On the topic of immigration and executive orders, Yoho said the ban was acceptable because it did not single out any one religion.

“I think all executive orders should be scrutinized very hard by all of us,” Yoho said. “I have not seen one that I’m in disagreement with.”

This, too, was met with a sea of crossed arms into “X”s over head.

On abortion and the funding of Planned Parenthood, the crowd again got vocal.

“My fight is not with Planned Parenthood,” Yoho said. “But I will not send taxpayer fund to any origination that does abortions on demand except for incest, rape or when the life expectancy of the mother is damaged.”

"How many of you have a concern with impeachment?" @WUFTNews pic.twitter.com/Qbf0uQE8Mj

Ron Thornton, a Yoho supporter, said he liked what the congressman had to say.

“I thought he handled the questions with answers that were sincere,” Thornton said. “It shows that he does practice what he preaches. He is not going to waver from his fundamental beliefs but has an open mind.”

Overall, Yoho said he was happy with the event and looks forward to his next one, which will be April 13.

“Anytime you have people engaged in politics, for the right reasons, I think we all win on that,” he said. “It’s when people aren’t willing to come to the table and we divide as a nation, that’s not healthy for our republic.”

After the town hall ended, Yoho returned to his office where he continued to address constituents.

WUFT News held a Facebook live stream of the town hall. The video can be viewed here.

Ramsey is a reporter for WUFT who can be reached by calling 352-392-6397 or emailing news@wuft.org.
Previous New Study Shows Allergy Relief Through Probiotics
Next Gainesville City Commission 2017 Election Guide