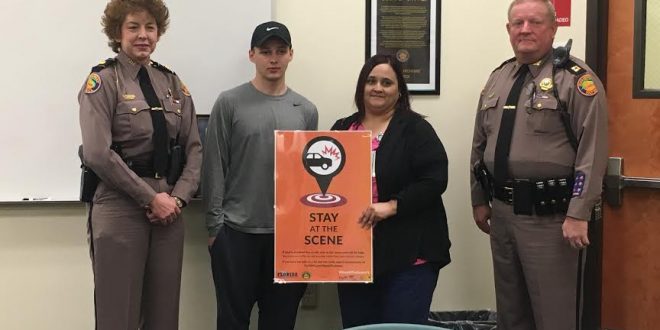 There were more than 99,000 hit-and-run crashes in Florida in 2016, with almost 3.2 percent of those in Florida Highway Patrol’s Troop B, which includes Alachua, Marion and Levy counties.

To raise awareness and encourage more responsible driving, the Florida Highway Patrol has been holding press conferences on hit-and-runs statewide, including one this morning at the FHP station in Ocala. The organization is doing so as part of its #StayAtTheSceneFL campaign for Hit and Run Awareness Month.

“Our local area is directly affected by this alarming situation,” Troop B Commander Maj. Eileen Powell said at the press conference.

Alachua County accounted for 1,390 hit-and-run crashes in 2016. Fourteen of those resulted in serious injury, and one had a fatality.

The most important action that a driver can take when involved in a crash is to stop, remain at the spot of the crash and call police, Powell said.

Under Florida law, a driver must stop immediately at the scene of a crash that results in either property damage, injury or death, and she or he must remain there until they have met all Florida statute requirements.

“We invited some of the families of hit-and-run crashes that we’ve investigated to join us,” Highway Patrol spokesman Lt. Patrick Riordan said. “This way, there can be a face to the stories.”

Powell said that the public’s help “can help us bring this epidemic to a close.”

“Leaving the scene of the crash only increases the penalties and the severity of the act,” he said.

LaMont noted that the Highway Patrol has had some success in solving hit-and-runs.

“Our partnership with the media and Crime Stoppers of Marion County has allowed us to solve two hit-and-run crashes in the past year,” LaMont said.“Without the broadcast of information by our media partners and the quick actions of the witness, the case certainly would have had a different outcome.”

A full list of active hit-and-run cases can be found on the Florida Department of Highway Safety and Motor Vehicles’ website.

Brianna Wright is a reporter for WUFT. She is a third-year journalism major at the University of Florida with a minor in leadership. She can be reached at 321-750-2369 or bwright6@ufl.edu.
@briannawright0
Previous Alachua County Files Lawsuit Against Its Own Sheriff
Next City Of Gainesville And Alachua County Agree To Swap Land

School Bus Involved In Three-Vehicle Crash, No Students On Board