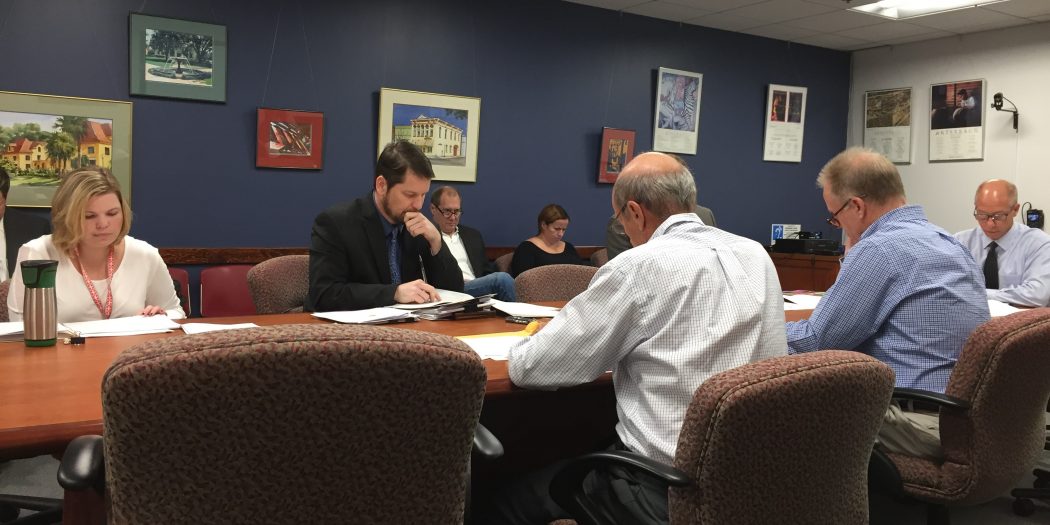 (From left) Brian Sergeant, 45, a pension and investment officer; Jonathan Visscher, 55, (far right) chairperson of the Pension Review Committee; and other members of the committee and city staff members review their options before making a decision on whether or not to continue working with Brown Advisory Council.

The Gainesville Pension Review Committee decided to keep their current advisors in their meeting on Sept 29.

The committee is responsible for advising the city on where to make good investments in order to generate money for the city’s pension fund.

It met to discuss whether to stay with Brown Advisory Council, which advises the committee on the nature of certain investments, or to choose a new group to advise them.

“You don’t want to go chasing the hot dot,” Phineas Troy of Summit Strategies Group advised the committee on the decision.

The city uses investment funds as a way to buffer the money flow from the city and from taxpayer dollars toward the pension fund. According to Brian Sergeant, a pension and investment officer of Gainesville, Brown recently has not gotten them good investment returns.

However, Troy, an investment consultant, advised the committee to stay with Brown even though it’s been underperforming recently.  After his presentation, the committee decided to keep working with the group.

This impacts not only retired city employees but also city taxpayers. When better returns are made, Sergeant said, the city’s yearly contribution rate can be lower and tax dollars can be used in other areas of the city’s budget.

Sergeant said the purpose of the meeting was to explore all options and analyze if they could do better regardless of already being in a “very strong financial position.”

Since the 1980s, Sergeant said, more than 70 percent of pension-benefit payments have come directly from investment returns.

“We want to make sure it stays that way and that we build on that strength,” he said.

Jonathan Visscher, 55, is the chairperson of the committee. He said the decision to keep working with Brown was made after deciding that the group’s underperformance was short-term in nature.

He said their goal is always to improve their investment return and risk profile, but Brown’s recent underperformance could be due to random changes in the market.

Regardless of which group the committee works with, these decisions directly impact Gainesville residents.

Current and impending city retirees, Visscher said, are dependent on the decisions that the committee and the city make about the pension fund. On the other hand, non-retirees are taxpayers whose money goes toward funding city programs like the pension fund.

However, Visscher said taxpayers and retirees can be confident that the committee takes these issues seriously and always analyzes their business partners’ performance.

“We’re constantly evaluating if they’re doing their job,” he said.

Other attendees of the meeting disagreed with the committee’s decision. Donald Shepherd, 61, is a former candidate for mayor of Gainesville who said he plans to run again.

He said he likes to go to all of the city meetings.

“It’s a key thing for any citizen to do,” he said.

He also said he sees investment opportunities that are being passed up by the mayor and city managers. And he said he disagrees with the committee’s decision to continue working with Brown.

“I don’t think they should invest in Summit Strategies,” he said. “They’re getting overpaid.”

Shepherd said ceasing work with Brown and choosing a different group would be the best course of action for the city in order to increase investment returns.

Visscher said the committee can always change its decision if the problem presents itself as structural, but as of right now the partnership is still beneficial.

Ultimately, he said, “The goal is to make sure the city can honor its promise to retirees at the least funding cost to taxpayers.”

Nicole Kocian is a reporter for WUFT news. She can be reached at 352-262-9272, or follow her at @nicole_kocian on Twitter.
@@nicole_kocian
Previous Sept. 29, 2016: Afternoon News in 90
Next RTS Downtown Station Will Accept Credit Card Payments