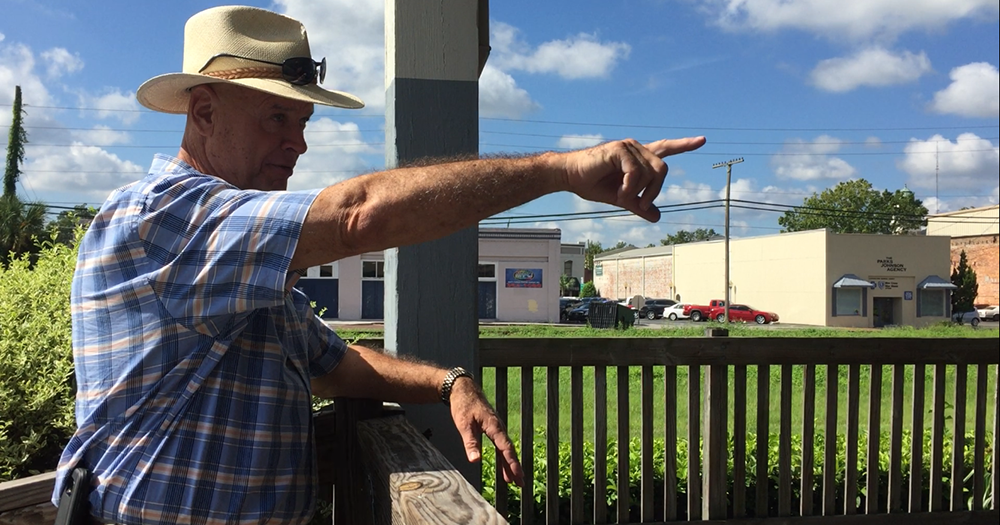 Live Oak councilman Keith Mixon points to the Live Oak Atlantic Coastline Freight Station where passengers would get off and on trains in Live Oak. The depot could hold live music to greet passengers at their stops. (Janiece Sebris/WUFT News)

The city of Live Oak is campaigning to win over the influence of Amtrak and the Southern Rail Commission to make the city an active stop for passengers.

Since the inspection train rolled through Live Oak in February, city officials have started a campaign called All Aboard Live Oak to convince Amtrak and the Southern Rail Commission (SRC) that the city would be a preferred stop.

Before Hurricane Katrina hit New Orleans in 2005, the Sunset Limited Line carried passengers from New Orleans to Jacksonville. The hurricane stopped service indefinitely because of extensive damage to a portion of the line. The main line from New Orleans, Louisiana to Mobile, Alabama was hit the hardest, Live Oak Councilman Keith Mixon said.

Three years after the storm, Congress passed the Passenger Rail Investment and Improvement Act (PRIIA), which made Amtrak develop plans to restore and improve rail service between New Orleans and Sanford.

Even before Hurricane Katrina, though, the Sunset Limited was one of Amtrak’s least efficient routes, yielding a loss of $433 per passenger, according to a passenger and rail initiative by the Florida Department of Transportation.

Live Oak’s campaign for the stop uses social media, word of mouth, brochures and posters to spread its message around the city, spokeswoman Brianna Barnebee of Oppenheim Research in Tallahassee said.

“This will be a way for us to collect signatures and show Amtrak and the Southern Rail Commission that we have this many people already interested,” Barnebee said.

A group called the Gulf Coast Working Group was established by the SRC to evaluate the restoration of the passenger rail service between New Orleans and Orlando, according to the Southern Rail Commission’s website.

The campaign has made it a priority to be informed on all the ins and outs of the process by even attending the preliminary meetings of the working group.

“We want to be a constant presence,” Barnebee said.

Mixon said Live Oak grew up by the railroad tracks.

The city has the Live Oak Union Passenger Depot and the Atlantic Coastline Freight Station, which now hosts a town museum. In the 1800s, crews in the Tallahassee and Jacksonville area worked toward the middle building the rails.

“Every day around noon they would say, ‘Meet you at the live oak tree,’” Mixon said.

Live Oak is petitioning both Amtrak and the SRC to consider making Live Oak an “East of NOLA Route stop” that would be running seven days a week, twice a day.

Mixon said that if Live Oak is made a permanent stop, the rails, which still carry cargo trains, will need to be upgraded to improve passenger service.

Currently, Live Oak has not been secured as a passenger stop. However, officials in Live Oak are not backing down. Most importantly, Live Oak would have to convince Amtrak that the stop would be able to attract riders in order to successfully make their case.

The first step is gathering enough evidence that acquiring Live Oak as a stop would be profitable for Amtrak, the Suwannee chamber executive director, Jimmy Norris said.

“If we can show them that there’s more to offer if you disembark at our depot, than one of the others, then they’re going to have to bring us on board,” he said.

The cost to make Live Oak a stop would be about $5.48 million every year, according to the SRC, but the campaign estimates that the return would be more than twice that amount.

The biggest concern is that Live Oak’s location could harm its chances of making enough money and drawing visitors to the city through Amtrak.

Mixon said that Live Oak’s location in the “North Florida Business Diamond,” is in the middle of Tallahassee, Valdosta, Jacksonville, and Gainesville. Amenities in this centralized location that might interest riders include ecotourism and entertainment.

The area near Live Oak offers cycling, fishing, camping, hunting, canoeing, and cave diving. With the city’s agriculture background, farm tours could be another attraction. Another fixture in Live Oak is Spirit of the Suwannee Music Park, which holds eight major music festivals every year.

“We’re giving them a reason to come to Live Oak,” Mixon said.

Initially, Mixon thought there would be stiff competition with other towns like Lake City or Madison. So far, he hasn’t seen anything like that.

“We’ve been sitting here, waiting for this,” Norris said. “But, we don’t want to be in a competition with anyone. We’re just trying to promote.”

By the end of September, the Gulf Coast Working Group will present a completed report of recommended solutions to restoring passenger rails at the end of this month.

Amtrak is currently working to review a study of the passenger rail service across the Gulf Coast. Because this process is in the early stages, Amtrak could not discuss in depth options for the route, Amtrak spokeswoman Kimberly Woods wrote in an email.

“Stay out of Orlando,” he said “You’re going to pay a lot of money for that mouse. But, up here, Mom and the kids and Dad all get to have whatever they want.”

Correction: September 30, 2016
A previous version of this story misidentified Brianna Barnebee’s title. Her title is spokeswoman of RB Oppenheim Associates, not spokeswoman of Oppenheim Research.

Janiece is a reporter for WUFT News. She can be reached at news@wuft.org or 352-392-6397.
@jasebris
Previous Welcoming Week in Gainesville Highlights City’s Effort to Help Immigrants
Next Podcast: Gainesville Police Dialogue