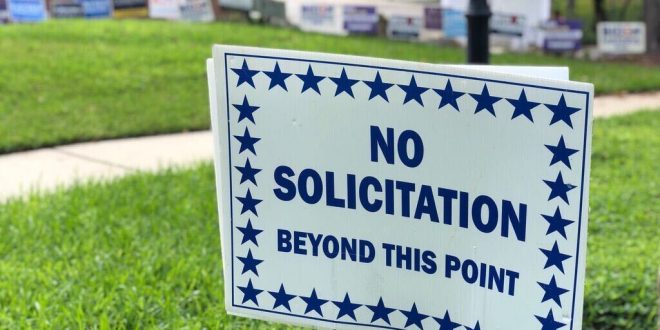 Voters know they’re nearing the polls when the “no solicitation” signs begin popping up. They mark the area within 150 feet of the polling place. On the same lawn, an assortment of campaign signs loom in the distance. (Natalia Galicza/WUFT)

There’s a first time for everything, Reitz?

“NO SOLICITATION BEYOND THIS POINT.” Short white lawn signs with navy blue lettering signify to passersby that they have arrived within 150 feet of the J. Wayne Reitz Student Union on the University of Florida campus. This marks early voting territory.

For the first time, that early voting territory is active during a presidential election.

The milestone for the Reitz Union occurs in conjunction with several others.

Many of the nearly 7,500 people who have cast their ballots at the student union are becoming politically active for the first time. It’s also the first time many longtime voters have cast a ballot during a global pandemic.

And every ballot is being tabulated in a time of political polarization rarely seen in the modern era.

Over the past 10 days at the Reitz, from 9 a.m. to 6 p.m., an overlapping chatter of voices and footsteps echo under the breezeway outside of the student union — “I don’t want to wait in a line this long!” or “Let’s just come back tomorrow.”

But virtually no line awaited those who arrived at the polls over the weekend. On weekdays, lines have filled to about 50 people at a time, leading to wait times of 20 to 30 minutes for most people. Alachua County’s five other early voting sites have seen similarly fluctuating wait times.

This year faces hide behind masks and people wait in line with added distance.

Turnout rises in tandem with the tension.

More people have voted early this year in Florida than any previous presidential election, and Alachua County on Thursday accounted for nearly 90,000 of the 7.3 million ballots cast statewide.

People are turning out in ways they never have before, beyond just bubbling in their ballots.

Sue Peloquin is a volunteer poll greeter. At 62 years old, this is the first time she’s volunteered for an election.

Peloquin was recently furloughed from her job as an office manager for a local law firm due to the pandemic.

“I find myself with a mix of disgust over what’s going on and the time to do something about it,” she said.

Her face remains tucked under a black woven sun hat, brown-tinted sunglasses and two sets of masks (a disposable mask underneath the white “Democrat” mask she received for greeting).

“I could stay home with my feet up watching TV or I could get up and do something with a purpose,” said Peloquin. “So I chose to participate.”

For every shift she completed last week, Peloquin stood sentinel along the 150-foot boundary. She clutched the baby blue voting guides in wait, springing up at signs of movement. Each conversation she struck from 9 a.m. to 2 p.m. had the same chirping enthusiasm: “Hi! Have you voted yet?”

Jonathan Maxwell, 48, is another first-time greeter. He originally applied to be a poll worker but missed the deadline by three days.

“I couldn’t do any poll worker training, but I wasn’t gonna let that hold me back,” he said.

On Election Day, Maxwell will be taking his day off work as a nurse to poll greet with the Alachua County Democratic Party.

Maxwell actually identifies as an independent, but he chose to volunteer with the Democrats because he wanted to get involved and that’s where he said he leans.

A main worry of his is equitable access to healthcare, as he’s currently in the Doctor of Nursing Practice program at UF and is concerned Obamacare will be repealed. UF requires that students have health insurance, but Maxwell said the plan that the university offers in lieu of his current plan is too costly for him.

“The pandemic is really showing how important healthcare is,” he said.

The Reitz is also teeming with first-time voters. One is Lauren Potesta.

She’s a junior applied physiology and kinesiology major at UF who is also in her third year of UF’s Navy ROTC program.

Potesta said this election matters just as much to her family. Her dad flew from his job in Chicago to his home in Miami to vote for local commissioners and judges. Potesta and her mom texted throughout each debate and discussed their thoughts on the phone immediately afterward. Hers is a family fixated on the national political situation.

“I ask her, ‘Mom what happens if Trump wins?’ and she says ‘I can’t even tell you,’” she said. “It seems really, really heavy.”

Her eyes began to water. They went glassy as she continued.

“It just hit me for probably the first time that this was it. I was in there, bubbling the bubbles, and I just thought ‘I really hope people are doing the right thing,’” she said.

Across the political aisle that same hope is being had, though in a different context.

About two miles from Reitz is a pale yellow house with a wide-open front yard. Hung high between two trees is a bright red Trump flag.

Amanda Perry lives inside. This year is also her first voting for president.

Perry is a junior information systems major at UF. She has a 22-year-old sister named Alexis and her dad, Keith Perry, is a Florida state senator representing Florida District 8.

Though she was excited to vote, she said she couldn’t express that excitement without receiving pushback.

“When we first put out one Trump sign in our yard, it was taken within three hours,” she said. “We put out a second Trump sign and within a day it was taken. So we went to extra measures, we got a ladder and put a flag in our trees.”

That was taken down, too. The next day her dad helped her remount the flag five feet higher.

“Our roommate didn’t even want to put stuff up out of fear of something happening to his car,” said Alexis Perry.

Amanda and Alexis say they live in a neighborhood brimming with Biden signs. They’ve never thought to take one down. They don’t plan to take theirs down either, despite being met with expletives each day.

“Although there’s an inkling of fear in me when I do have that sign out, I still have to live my life,” said Amanda Perry.

They speak of politics as more divided since the last election. This divisiveness brought them to the polls with more fervor.

Both Democrats and Republicans are showing up in sizable ways.

In 2016, Alachua County was the sole blue dot in north central Florida. It made one of nine blue counties out of Florida’s 67. Though the majority of ballots are still blue in Alachua County, Republican votes are expected to be on the incline statewide.

Reitz may be quieting as the early voting window starts to shut, but volunteers are bracing for the polls to pack up again on Tuesday.

Natalia is a reporter for WUFT News who can be reached by calling 352-392-6397 or emailing news@wuft.org.
Previous Oct. 29, 2020: Afternoon News In 90
Next ‘It’s Your Inalienable Right’: Gainesville’s Homeless Population Encouraged To Vote