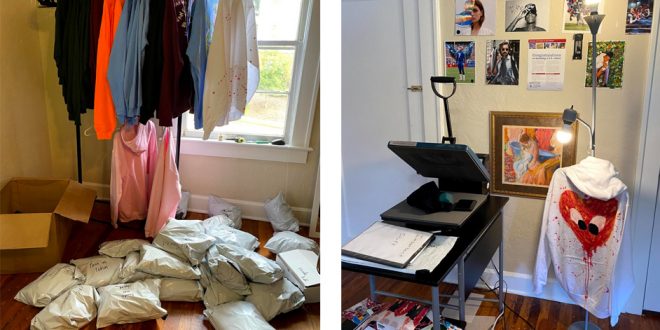 Martín Iragorri’s dedicated a room in his house for his business. He said he wants to buy a big couch so customers can come hang out and he can get to know them. (Photos courtesy of Martín Iragorri)

Many clothing stores across the country shut their doors due to the COVID-19 pandemic, providing University of Florida students who run Instagram shops with an opportunity to reach new customers and expand their businesses.

He got the idea for his brand, Vangorri, after selling his dad’s paintings on Instagram two years ago. Iragorri then began creating his own artwork and printing it on clothing. Last year, his dad gave him a printing press as a gift to pursue his passion for entrepreneurship.

“I became a United States citizen two years ago,” Iragorri said as he pointed to his citizenship certificate on the wall of his studio. “This [owning a business] is the American dream.”

He believes his brand became popular because of the unique artwork which combines photography with abstract painting. He said he reached 1,000 sales last month. However, Iragorri temporarily paused orders on his website so he could catch up and mange his schoolwork.

He described his business as a one-man show, because he creates artwork, manages social media and runs the website.

Alex Egues, a 19-year-old UF political science student, also got the idea for her brand from a family member.

She started her brand, Made in Heaven, with her sister Tori during quarantine, to honor their uncle who passed away recently due to a heart attack.

“It was really hard to mourn him especially because the quarantine separated our large family,” Egues said. “My sister and I started Made In Heaven in an effort to come together and work on a project that would celebrate our uncle’s happy spirit.”

The brand launched at the end of August with its first product – a sweatshirt with the brand’s logo in rainbow letters.

“We wanted our first logo to be a rainbow to recognize how much happiness our uncle brought to us,” she said.

Egues said she and her sister chose to launch their shop on Instagram because it seemed like the appropriate place for the audience they were targeting.

Within the first month, they estimated $1,500 in sales.

She said balancing school, work and a business has been challenging, but it’s what she loves so she doesn’t regret it.

“The pandemic has definitely made a lot of people feel disconnected,” Egues said. “I hope our brand can bring optimism to others in this lonely time.”

Cami Hidalgo, a 20-year-old UF telecommunications student, also started an Instagram business in quarantine with her sister, who goes to school at Boston University, and her friend Emily.

“We got the idea thrifting in Miami,” Hidalgo said. “We realized what awesome clothing items we found for such great prices and thought, ‘Why not?’”

She said Emily came up with the name and her sister made the Instagram account. That’s On Thrifted was initially only thrifted items. However, now they accept used clothing from anyone, according to Hidalgo.

“We’ll take used clothing, style it, post it, package it and ship it,” she said. “We make the packaging cute by using our logo stickers.”

Hidalgo believes the Instagram shop gained a following so quickly because of its style and sustainable fashion efforts.

Lily is a reporter for WUFT News who can be reached by calling 352-392-6397 or emailing news@wuft.org.
Previous The Lede || Season II Episode VII: Your Country, Your Future, Your Vote
Next Wrapping The 2020 Trump-Biden Presidential Debates