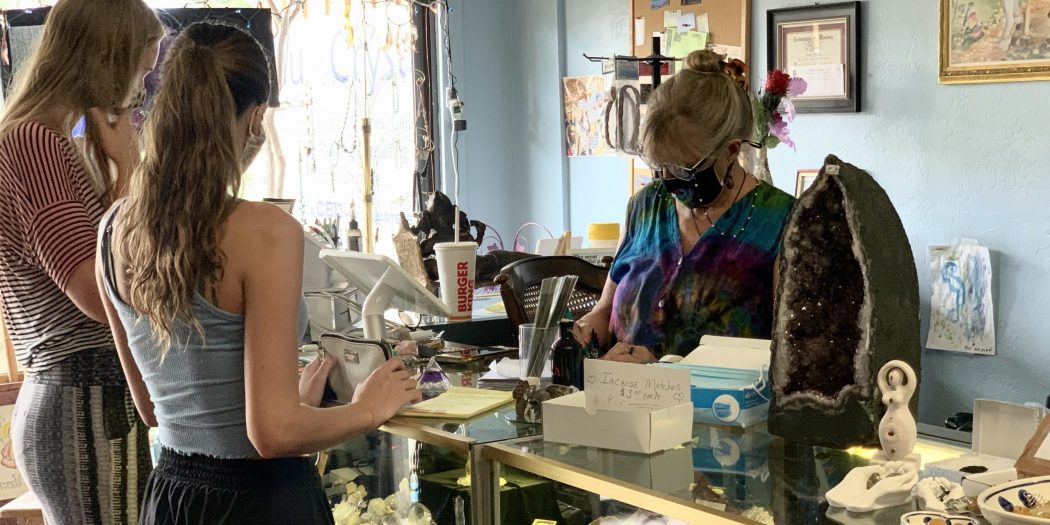 Linda Delaney, owner of Blu Crystal, checks out two young customers at the register. She requires masks in her store, but customers are still encouraged to touch the crystals and cards to form a personal connection. To maintain safety and protect the energy of the tools, she cleanses her store every day and keeps occupancy limits. Caitlyn Adams said the energetic connection can feel like anything from tingles to buzzing, from warmth to cold. (Ava Loomar/WUFT News)

Energy And Isolation: Alachua County Spiritualists Adapt Their Practices To A Distanced World

Caitlyn Adams, the 31-year-old owner of Energy Healing with Caitlyn, guides me through a meditation. Her eyes are closed, her face relaxed. In my open palms, I begin to feel a tingle. Warmth. My hands are a chalice, spilling and spreading buzzing energy up my arms to my spine. I feel it gather around the back of my neck as I let out a deep breath, letting her words soothe my racing thoughts. If there’s a word for it, it’s comfort.

Above: Follow Caitlyn Adams through the guided meditation she conducted with the reporter over Zoom.

When I open my eyes, our Zoom call faces me. Reiki, a form of energy healing that originated in Japan, usually begins with a combination of meditation and light touching that directs positive energy to areas of stress in the body. Sometimes, masters and practitioners use tools like crystals, herbs, incense and singing bowls to “get to that space where you can relax and release.” But neither physical touch nor releasing stress have been in the cards this year.

Alachua County has spent most of 2020 behind closed doors. The summer months zoomed by as people hid themselves from an invisible particle that plagued both body and mind. While the physical and financial distresses of COVID-19 are countless, emotionally, we’re more stressed than we’ve ever been — average stress levels among U.S. adults, on a 10-point scale, increased from 4.9 in 2019 to 5.4 in 2020, the American Psychological Association reported. It’s the first significant increase in stress levels since the survey began in 2007 before the economic recession.

This year, lack of energy is a common complaint. But for the owners, employees and patrons of Alachua’s bubbling metaphysical scene, energy is not just the way they wake up in the morning. It’s the way they stack money in the bank and the way they communicate with the world around them.

“If I didn’t have the practice of reiki for myself, I don’t know what I would have done the last six months,” Adams said.

The connection between the metaphysical and the physical is strong enough to deter customers who fear they won’t just be exchanging energy, but germs. To combat both negative energy and a pandemic, spiritualists who make a living from their craft in Alachua have had to come up with magical solutions.

Adams got a head start on adapting to COVID-19. She moved her practice from Pennsylvania to Gainesville a year ago and began to offer distanced healing sessions for the customers in her former state. Sometimes they were over phone or Skype, but now, like much of the world, she uses Zoom.

Usually, customers lie on an amethyst board that emits infrared heat. The energetic frequency from the crystal is supposed to soothe the soul while the heat soothes the muscles. Sometimes, Adams will give them a crystal to hold and siphon energy from. A level 3 practitioner of the three levels in reiki, Adams said she then opens the energy channel between her and her customer. She moves her fingers lightly over the body, guiding the mind through meditation and energy to places of need.

In an hour-long session, she’s seen everything from peaceful sleep, to leg twitches, to snoring. But on the other side, she said, her customers always feel better than when they came in. Her Google reviews agree, at a steady 4.9 stars.

She doesn’t see reiki as a substitute to medical help, but as complementary. She still offers some in-person masked sessions, but only after thoroughly sanitizing her entire workspace and tools.

In reality though, Adams views her usual tools as just that — tools. You don’t need them to practice the craft or feel the energy.

“If I’m pointing at the moon, and instead you’re focused on my finger, and you know, noticing, ‘oh, her nails are painted, oh, look, she’s got her thumb in front versus behind,’ then you’re too focused on my finger, and you’re missing the moon,” she said. “So all of these tools are the finger pointing us towards the moon. And we can either get caught up in the tools, or we can go to what they’re pointing us towards.”

Adams has actually seen her business increase in the last few months. People have had time to reflect on old things they had shoved down, she said, and with a bit of silence and space, feelings are bubbling up.

“I’ve seen a big uptick because people are finally giving themselves time to work through some of this. And I think that that’s the beautiful thing.”

The owner of Gainesville’s Blue Crystal metaphysical shop agrees. Linda Delaney, 69, said she is a reiki master, an intuitive and an empath — “I believe in everything.” She opened her store three years ago, mainly selling CBD products, but quickly their catalog grew to include all things spiritual. Now, it’s home to a small but thriving community of Wiccans, Pagans, psychics, mediums, tarot readers, interested students and master teachers.

Above: Blu Crystal owner Linda Delaney speaks about her decision to reopen. “I was really depressed and I had to pull myself out of it . . . I woke up and just went, ‘No. No, you’re not letting this take over.'” (Ava Loomar/WUFT News)

She said she’s seen most of her growth within the last year — “People are digging deep. They’re getting into spirituality.” — but that was heavily stalled when she had to close from March through the end of May.

“It almost cost me my store,” Delaney said.

She did receive a small business grant from the federal government, enough to open doors again, with shorter hours. Now she’s working to get a CARES grant from the city to sustain through the end of the year. If she doesn’t get it, she said they’ll survive like they always do.

While reiki may not need tools all the time, Delaney’s trade is tools. In her shop, there are glass cases filled with designed tarot decks, amethyst geodes, two-foot selenite towers, tiny carved statues. On the right side, swinging pendulums, a rainbow of incense, colored candles, crystals organized for balance, guidance, love. As you move toward the back — silver Tibetan singing bowls, rows of quilted bohemian clothing, a short bookcase and its secondhand books, slightly weathered. Above, a small seating area for classes they held before quarantine, and all along the walls, vibrant paintings for sale from Gainesville artists.

Delaney said inventory has been an issue for Blu Crystal. With supply chains cut off from countries like India and China, it’s been more difficult to get enough of their popular goods like incense.

But the core of this menagerie of spiritual objects is still, simply, energy. And for most, that also means touch. Delaney wants her customers to connect with their purchases. That’s why they’re still encouraged to touch or feel the pieces they might want to take home. To compensate, every day, she said physically sanitizes everything in her shop, and spiritually, she “sages the hell out of it.”

When she reopened, she shortened her hours to 12 p.m. to 5 p.m. and contracted more independent psychics to work out of the Blu Crystal backrooms. Her only other technical employee, psychic Barbara Petrone, had to stop working to protect her immune system. That’s when she hired Liz Love, a psychic medium, and then Mohini Mary Angela Lundquist, a South African medicine woman who works with courie shells and egg readings. Each have their own followings and bring more customers in, helpful after their financial loss. As Delaney says, “This is not my store. This is the community’s store.”

Lee had been coming into the shop before quarantine and even received a tarot reading from Lundquist. But it wasn’t until a friend gifted her first tarot deck for her birthday in May that she ever considered tarot as a career. Quarantine gave her the time to do some unearthing. She said she accepted the psychic ability that ran on her mom’s side of the family and began to accept her intuition as more than “good guesses.”

“When I told her [Delaney] about everything that I’m experiencing over quarantine, I was like, ‘Hey, I also have this deck of tarot cards I was gifted.’ And she was like, ‘How’s that been going for you?’” Lee said. “We talked about it. She’s like, ‘Hey, why don’t you be a reader here?’ And yeah, that’s kind of where that journey started.”

Since then, she’s been holding one-on-one tarot reading on the bottom floor of Blu Crystal. It’s a small room, so she has to limit it to just her and her customer, wearing masks across the table. Some tarot readers let customers touch the deck, shuffle or pull cards, but due to both COVID-19 and energy exchange, Lee prefers to keep her cards to herself. She agrees with Adams that the cards are just a tool and the real meaning is in the experience — “your intention behind the tools that you use is what makes it ‘magical.’”

For people who desire an even more distanced experience, she’s set up a LinkTree and website to hold tarot readings over the phone. After spending her quarantine learning, for Lee — like Adams, Delaney and the other patrons of the metaphysical scene — it’s a lifestyle.

“I try to be very specific in my intentions with manifesting anything,” she said. “Whether it be through meditation, or through divination, or even just my day to day life, like what is my intention with this? I think it’s actually the power behind the tool. And that’s what makes these things ultimately real.”

Skeptics come in and out of every spiritual business. But it’s an even harder barrier to cross when people believe touch is a requirement to connection.

“I love skeptics. I get a lot of people who are like, ‘I’m not sure this is gonna work, but I’ll try anything.’ And then they actually let themselves experience it. And they’re always amazed,” she said. “But if you were just going to sit there the entire time going, ‘This is stupid. I don’t believe in this,’ then you’re not going to be able to relax to that point where you can receive the energy. And then of course, anything that does happen, you’ll see it as a coincidence.”

At Blu Crystal, Delaney and Lee see their fair share of questions, but to Lee, the fact that someone even comes to seek advice shows they want to be challenged — “you can’t find what you’re not looking for.”

Alachua County has always been a place of transition. The spiritualists who call it home say they are used to balancing positive and negative forces that disrupt our comfortable way of life. Businesses expand, then disappear; students settle, then graduate; prairie grasses gust, then flood.

A pandemic rages, but must fade away.

Ava is a reporter for WUFT News who can be reached by calling 352-392-6397 or emailing news@wuft.org.
Previous The Point, Oct. 8, 2020: The Reason Florida’s Voter Registration System Hit A Last-Minute Snag
Next Alachua County School District Says Its ‘Main Source Of COVID-19 Cases’ Is High School Football