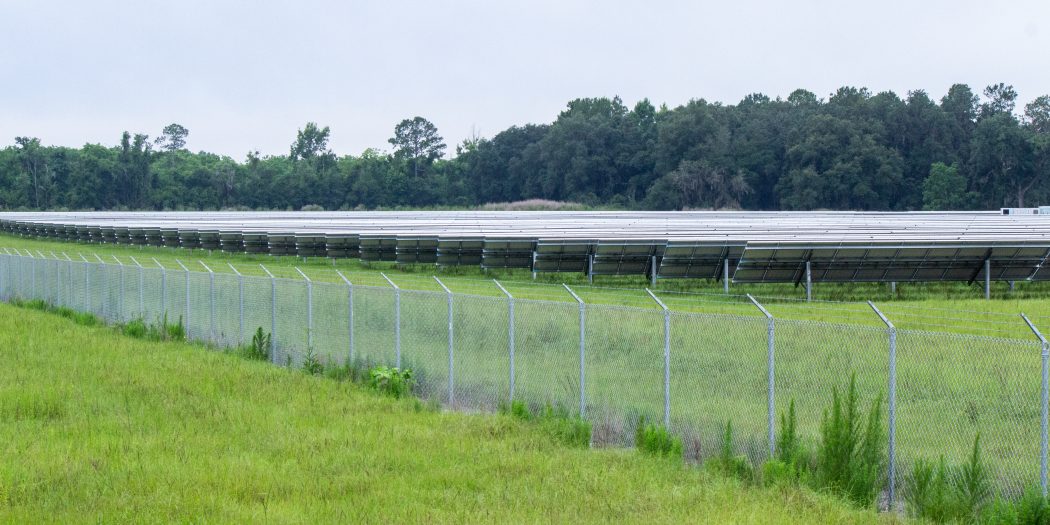 Florida Power and Light's 74.5 MW Horizon Solar Energy Center near Hawthorne, FL spans 684 acres and is comprised of around 330,000 panels. This facility is roughly the same size as each of the three solar fields FMPA proposed to build in Osceola and Orange counties as part of its solar project. (Marcelo Rondon/WUFT News)

The city of Newberry will be looking to join the Sunshine State’s recent trend of turning to solar energy to power their homes over the next few decades.

As a first step in becoming more energy efficient, the city of Newberry will purchase one megawatt, about five percent of its total power usage, from the Florida Municipal Power Agency’s Solar Energy Project. Mayor Jordan Marlowe said this power will be used for city government buildings and street lights.

Mike New, city manager for Newberry, estimated the agreement will cost residents an extra 50 cents a month. Some of the money will come from taxes and the rest will be added to utility bills.

FMPA Solar Project consists of three solar fields in Osceola and Orange Counties in metropolitan Orlando, with approximately 900,000 solar panels across 1,200 acres to produce 223.5 MW of power. FMPA Spokesperson Mark McCain said the exact locations of the solar fields have not been determined yet.

“We’re still in the early stages of development,” he said. FMPA is hoping to finalize permits by the end of 2019 and begin construction in early 2020. The solar farms will be owned and operated by Florida Renewable Partners, a NextEra Energy company.

Once complete, the three facilities will generate enough energy to power 45,000 homes. Per field, that amounts to 74.5 megawatts of power, or enough energy for 15,000 homes, according to FMPA chairman Bill Conrad, who proposed the project to the city at the Newberry City Commission meeting three weeks ago.

Jessica Baker, who has lived in Newberry for 13 years, said she thinks the price increase would be worth the transition into cleaner energy. However, she can understand why some residents might not want to pay more if they have already have a set budget for utilities.

“A 50-cent increase can mean a lot to some people,” she said. “Even my mom, who can afford the increase, will probably complain about it.”

According to New, the higher prices come from the investment in solar panels and building the infrastructure to operate them.

“Even the cheapest solar energy is still more expensive than regular power,” he said.

Tim Marden, Newberry city commissioner, said he was initially skeptical about investing in solar energy this early into its lifespan.

Two and a half years ago, FMPA approached the city of Newberry with a similar proposal to diversify its energy sources. The city declined.

At the time, the city decided against participation because the technology was more expensive. Marden said he would prefer to wait and see if other cities “figure out the kinks of solar” before implementing it into the power grid.

“Everything is a cost-benefit analysis,” he said. At the time, the city of Newberry was not ready for an increase in utility fees.

In recent years, mass-production of solar panels around the world has caused prices to drop exponentially.

Barry Jacobson, who has a Ph.D. in Biological and Agricultural Engineering and is the president of Gainesville solar energy company Solar Impact, said the biggest hurdle for solar power has always been the upfront price. Solar Impact has installed solar panels for the Tyndall Air Force base, University of Florida and Gainesville Regional Airport.

Jacobson believes people may be more eager to turn to solar throughout the rest of 2019. This is not only due to the decrease in production price, but because tax-credits offered by the federal government for commercial and residential solar power generation will be reduced by the end of this year.

“If you invest in solar this year, you have the benefit of the tax credits. Which means you’ll get about 30% of your investment back in taxes,” he said.

Utility companies like Florida Power and Light, Duke Energy and now the FMPA project have taken advantage of those credits to create solar farms throughout the state. An example of this is FPL’s 75 megawatt Martin Next Generation Solar Energy Plant in Martin County, which is currently the largest solar power facility in the state.

A 2018 study from the Southern Alliance for Clean Energy found that Florida is set to surpass North Carolina as a regional leader in solar energy capacity by 2022.

Marden said solar power is more of a long term play. Currently, it cannot be stored efficiently. This means that solar farms only generate energy when the sun is shining on them.

“In the short term, we’re banking on the goodwill of using solar,” he said. “But as the battery storage technology increases throughout the next 30 years, we will reap the benefits.”

Newberry’s deal with FMPA will extend over 30 years, which also happens to be the average lifespan of a solar panel, and expand upon the All-Requirements Agreement the city has been under since 2000. The agreement connects Newberry to 12 other cities in a statewide power network.

Since FMPA is Newberry’s sole energy supplier, New said that the city did not consider any other solar projects to diversify its power sources.

“We like the arrangement we’ve had with FMPA, and believe the solar rate we receive will be as competitive as any other,” he said.

New is optimistic about the future of solar energy and considers this deal to be rather low-risk since the city will only be paying for the power they receive.

“If they don’t deliver the energy, we don’t pay,” New said. “Simple as that.”

Newberry will only start drawing solar power from FMPA and see increases in the utility bill once construction on the project in Orlando is complete. The company estimates this timeline will stretch until at least mid-2020.