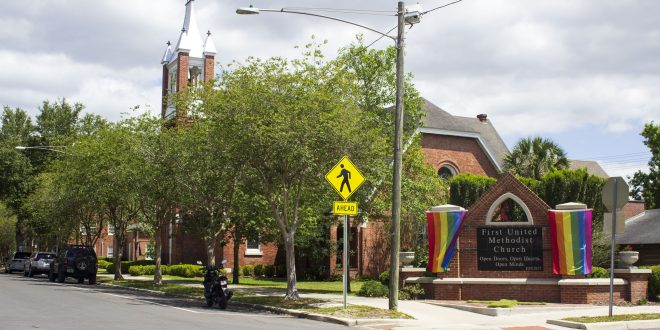 The First United Methodist Church of Gainesville, where Pastor Beth Farabee hung up pride flags in solidarity with the LGBTQ community during the season of Lent. (Angel Kennedy/WUFT News)

Tim Leslie and Robert Jackson refuse to allow a vote opposing their sexuality to undermine the love they have for their faith.

The two partners, members of First United Methodist Church in Gainesville, were frustrated upon hearing that the church’s General Conference, during a special session in February, had voted in favor of the “Traditional Plan,” which doubles-down on the church’s ban against LGBTQ clergy and same-sex marriage.

As the church’s judicial council on Friday upheld major provisions to the plan, a majority of First United Methodist’s congregation is pushing back against the General Conference’s decision, while other area congregations find themselves divided on the subjects of LGBTQ clergy and same-sex marriage.

The Traditional Plan, which passed 438 to 384 in February’s special session, led to a groundswell response from supporters and opponents across the denomination, said Trinity United Methodist Church co-pastor Steve Price.

The One Church Plan, a contrasting plan that would have allowed individual churches to decide whether to ordain and marry LGBTQ laity, was rejected 386 to 436 during the session, despite backing from the church’s Council of Bishops, which oversees nearly 12 million UMC members across North America, Europe, Africa and Asia.

In response, Florida lay members issued two open letters in reaction to the Traditional Plan’s passage – one for clergy and another for laity. Individuals can add their name to lament the decision while standing in solidarity with the denomination’s LGBTQ members.

To date, 1,560 congregants and 278 members of the clergy have added their names to the letters. Among the individuals who have signed, 135 were from Gainesville.

Price and his wife and co-pastor, Catherine, have spoken to supporters and opponents in their congregation about the vote, hoping to promote an inclusive and welcoming church. However, Price said, the General Conference’s vote was a major disappointment for him and proponents of the One Church Plan.

“(The One Church Plan) provided the most gracious space for the large majority of us to stay together even in our differences,” Price said. “When the traditionalist Plan ended up passing, that was a major disappointment for a lot of people who felt like it did not reflect the diversity within our denomination and took a hard stance for one perspective.”

While the Prices’ congregation includes members both in favor and against the plan, Rev. Beth Farabee said a majority of her congregation at First United Methodist supported the One Church Plan and LGBTQ inclusion.

Farabee, whose congregation expressed significant disappointment about the plan, said she and her congregation have cultivated a community of inclusion to combat the February decision.

During the season of Lent, Farabee placed LGBTQ pride flags along the sides of the First Methodist welcome sign so that the church could “repent and dissent” from the General Conference’s views. Farabee said the flags allow the congregation to reflect on the decision and repent the UMC’s decision.

“We’re sorry for the ways that the church has been complicit and then overly harmful to the LGBT community, so we repent for that,” Farabee said. “And then secondly, we dissent, where we can’t be okay with going along with business as usual. We’ve gotta figure out something new.”

David Sammon, a First United member and former dean of UF’s International Center, said the February vote reaffirmed his frustration with the church, which he said has been unresponsive to the LGBTQ community’s needs for a long time.

Sammon, who has LGBTQ members in his family, applauded Farabee’s efforts since the General Conference vote and her clear demonstrations of support for the LGBTQ community.

“(Farabee’s) been very welcoming of people from all walks of life, including gays and lesbians, homeless people, people who have been on the edge of society, the poor and those in need of special attention,” Sammon said. “We’ve been very supportive of her efforts in those regards.”

Farabee, in her third year as First United’s pastor, attributed the church’s successful inclusion of its LGBTQ community to two former pastors, Rev. Dr. Harold Henderson and Rev. Sarah McKinley, who worked with straight and LGBTQ members in the congregation to have an open dialogue about the church and sexuality.

In keeping with the church’s legacy of inclusion, Farabee also has continued to hire LGBTQ individuals as church staff members, including a communications/office manager and a music director who are LGBTQ.

Farabee said that despite the General Conference’s decision, many of her congregation said the church’s commitment to inclusion was one of the main reasons they stayed in the church.

“I’ve just been absolutely overwhelmed and blessed by the support and the encouragement for (our LGBTQ members),” Farabee said. “As long as I’m pastor at First United Methodist Gainesville, (hate) will not happen here.”

Since the vote, Leslie and Jackson have been working with First United Methodist to elect LGBTQ-accepting delegates to the Florida General Conference. They said they will wait until the May 2020 General Conference session before deciding whether to leave the denomination.

The two hope that by electing delegates who support the LGBTQ community at the state’s General Conference, those delegates will be able to push new legislation in favor of the community within the church.

“Florida tends to be very conservative in both politics and probably in church, too, so I think it may be an uphill battle,” Leslie said. “But I think that there is certainly a chance because there are a lot more people thinking that maybe the General Conference Plan is not so justified.”

Jackson said he appreciates the pastors who have accepted him, telling him that Methodism is more than just his beliefs and sexual orientation. He’s also encouraged because the church’s younger population increasingly sees no conflict between sexuality and religion.

Although only four churches participated in releasing the ad, Farabee said, a time crunch might have prevented more churches from joining in to support the LGBTQ community. WUFT reached out to several churches in Gainesville and Alachua County but were unable to receive comment regarding their support of or opposition to the General Conference decision.

Despite the judicial council’s recent decision, Leslie and Jackson said the decision may have brought LGBTQ supporters together in advance of the 2020 General Conference. Both expressed their appreciation of Farabee’s efforts, stating that the pastor has been 100% on-board with supporting the LGBTQ community.

“It’s the moments and the people that you surround yourself with that makes the church, and it’s not what a General Conference puts down on paper,” Jackson said. “We won’t abide by those words, and we won’t believe them.”

Angel is a reporter with WUFT News and the Production Manager for GHQ – a top-40 radio station based out of the University of Florida. Angel can be reached at 813-810-6742 or by emailing angel.kennedy@ufl.edu.
@mrkennedya
Previous A Year Later: No Progress Or Visible Changes From Newnans Lake Improvement Initiative
Next The Point, April 30, 2019: Police Could Soon Pull Over Florida Drivers Who Are Seen Texting While Driving