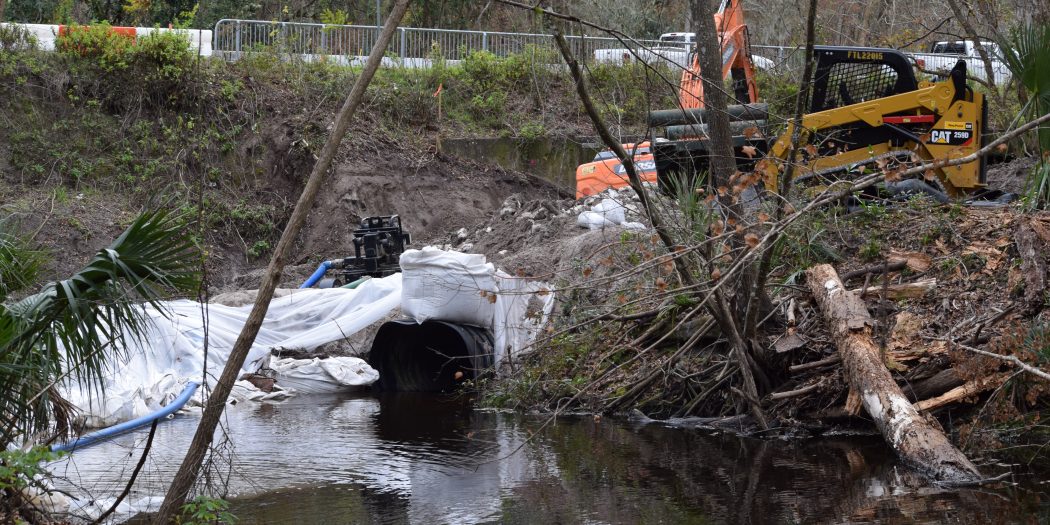 A contractor works to stabilize the area around Hogtown Creek at the southern entrance to Alfred A. Ring Park near Northwest 16th Avenue in Gainesville. (Tori Whidden/WUFT News)

The south end of the nature trail in Alfred A. Ring Park is closed due to Alachua County’s Public Works Department initiating a bank stabilization project that costs more than half a million dollars.

It’s yet another ongoing county effort to recover from Hurricane Irma’s effects.

Hogtown Creek runs through nine parks in Gainesville, including Alfred A. Ring Park. The issue of the bank eroding at the park’s entrance could be a serious threat to the roadway, Link said.

The county contracted with Reddick-based Commercial Industrial Corporation (CIC) to complete the very first stabilization process to Hogtown Creek by restoring the entire site and installing a rock wall into the river’s bank. This is the only section in need of the procedure for transportation purposes, Link said.

“This is not an optional project,” Link said.

The contractor has installed a diversion of the stream and will implement a gabion mattress. The workers will continue by installing steam bank erosion measures including gabion baskets of baseball-sized stone, soil stabilization bags and cloth, Sexton said.

Workers will then plant vegetation planted on the disturbed areas and the entire site will be restored, said Jerehmia Bouse, Commercial Industrial Corporation superintendent.

“My workers come out to the site at 7 a.m. and work until 5 p.m. every weekday,” Bouse said. “Working in the rain isn’t so bad, but we really don’t like working in the cold.”

Regardless of the weather, Bouse said the project is urgent and they are trying to expedite it.

The sidewalk and outside lane of NW 16th Avenue closed on Jan. 28 from NW 16th Terrace to NW 22nd Street, Bouse said. If weather permits, the CIC anticipates that the south entrance to Ring Park will reopen Mar. 1.

“The park will still be accessible to the public during the stabilization process using the entrance at NW 23rd Boulevard,” County Engineer Ramon Gavarrete said. “Visitors will not be able to enter the park from 16th Avenue or get to NW 16th Avenue from the park.”

The Federal Highway Administration contributed approximately $85,000 to the $614,678.13 cost of the project. The balance is provided by general funded property taxes, Gavarette said.

“This project is definitely needed and could not wait any longer,” Gavarette said. “Erosion just doesn’t happen one time.  It continues to erode until Mother Nature reclaims what maybe at one time, it was hers.”

Link said the department is unaware of this ever occurring in the past and hopes that it will never occur in the future.

“We didn’t implement this with a lifespan,” Link said. “We’re hoping the project is permanent.” 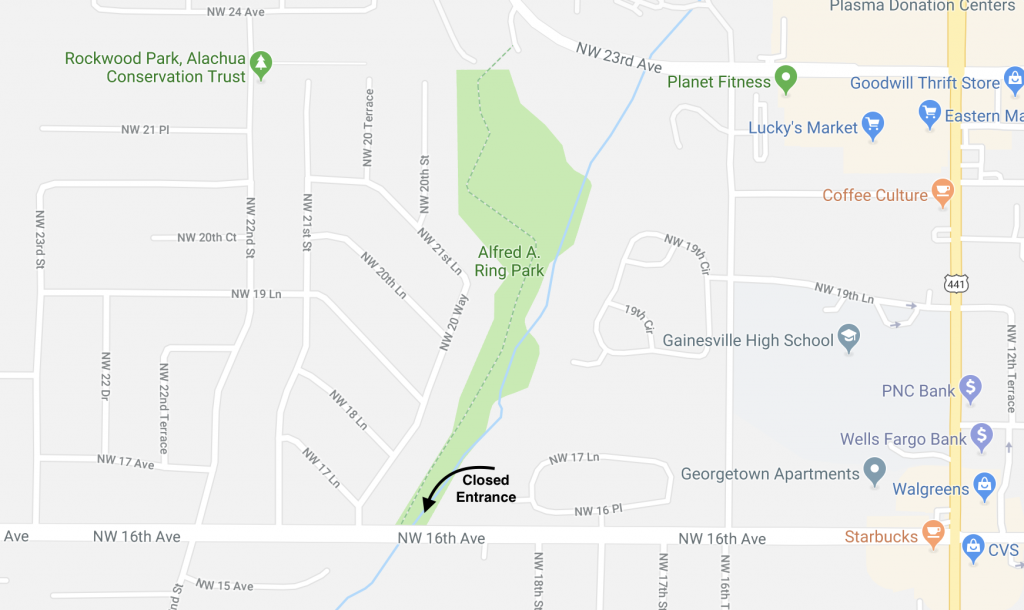 Tori is a reporter for WUFT News who can be reached by calling 352-392-6397 or emailing news@wuft.org.
Previous Evacuation At High Springs School Brings Changes To Protocol
Next The Point, Feb. 21, 2019: Florida Officially Bans Chumming For Shore-Based Shark Fishing