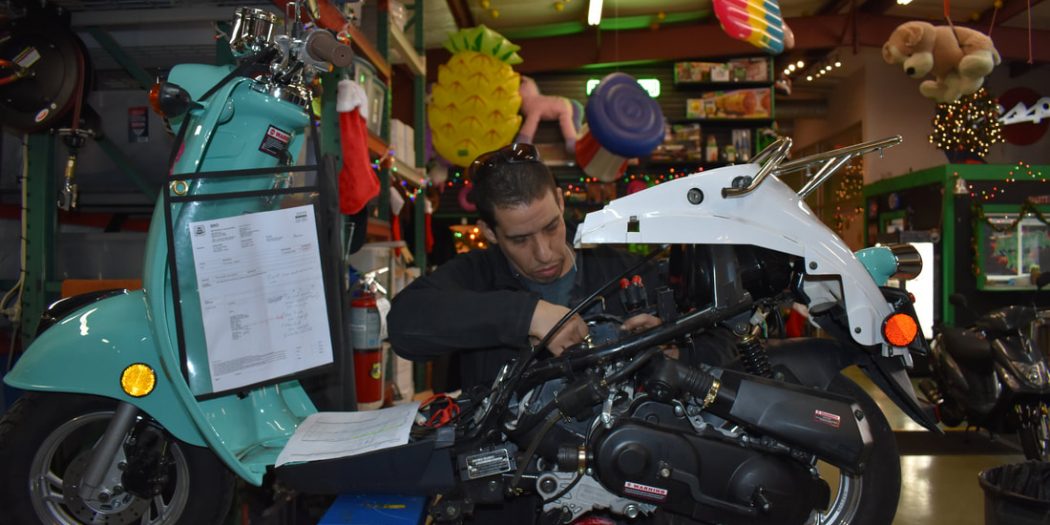 Anthony Valentin, who has been working for New Scooters 4 Less for the past two years, repairs a scooter. (Vanessa Blankenship/WUFT News)

With Motorcycle, Scooter Accidents Largely On The Rise, Safety Is On Law Enforcement Officers’ Minds

Bryn Berkowitz was driving her white Piaggio Fly 50 scooter this past May on Southwest 9th Road, where she has lived for the past four years, when she got into an accident.

She was coming up to a stoplight when a black Sedan in front of her pulled off to the side to do a U-turn while Berkowitz was still driving at full speed.

“I had the choice of either slamming on my brakes and flipping myself over the front of my scooter or try to brake in time and kind of hope for the best,” Berkowitz said.

Berkowitz slammed into the driver’s side of the motor vehicle and was ejected off her scooter.

Berkowitz, a University of Florida graduate student studying forensic medicine, was not wearing a helmet at the time. She did not suffer life-threatening injuries and left the crash scene with only a sprained elbow.

Even after the accident, Berkowitz still prefers to not wear a helmet. The only time she wears one is when she is riding her scooter in the rain.

“I’m the classic example of what happens if you don’t, and I got very lucky. But I still don’t wear it, which is very stupid, but I still feel safe in Gainesville,” Berkowitz said. “I just think that the person who hit me wasn’t that smart.”

Motorcycle and scooter safety is a concern for multiple counties within North Central Florida. Safety precautions are encouraged by police officers even though Florida riders and passengers are not required by law to wear helmets.

In November, the Ocala Police Department was awarded a state grant of $24,000 to pay officers overtime to go out and enforce motorcycle safety laws, according to Sgt. Eric Hooper with the OPD traffic unit.

Hooper said OPD officers will be putting on a minimum of two operations a month and will specifically be looking for motorcycle violations like speeding, reckless driving and trying to drive in-between cars.

“Our motorcycle injuries and fatalities are higher here than other places in the state,” Hooper said.

In Bradford County, the amount of motorcycle riders is smaller than other areas of the state, according to Major Brad Smith, who has been working with the Bradford County Sheriff’s Office for the past 10 years.

Smith said that the office’s biggest concern is to get car and larger motor vehicle drivers to be cautious with motorcycles on the road.

Smith said that some of the motorcycle accidents in Bradford County resulted in life-threatening injuries that have led to amputations and head trauma.

“It’s just that people on the motorcycles involved in the accidents seem to have the worse end of the deal when it comes to injuries,” Smith said.

According to data gathered by Florida Highway Patrol Sgt. Dylan Bryan, there have been 44 motorcycle crashes in Bradford County since 2016 (46 people involved had injuries).

Within the city limits of Gainesville, motorcycle crashes have slightly decreased since 2016; but scooter crashes are on the rise, according to Sgt. Summer Kerkau with the Gainesville Police Department traffic unit.

Through proper education and training, programs like the SMART Motorcycle Safety Course can help teach the public safe driving measures, according to Zyskowski.

Zyskowski said the program is funded through the Florida Department of Transportation, and the five- to six-hour class is free to the public on Saturdays.

The class takes place at the Kirkpatrick Criminal Justice Training Center, 3737 NE 39th Ave. in Gainesville, and participants are encouraged to bring water, their own motorcycle and a valid license.

Zyskowski said officers teach slow-riding skills and braking techniques to enable riders to practice safe U-turns, how to avoid obstacles on the roadway and overall gain confidence while driving.

It’s been seven months since her scooter crash, and Berkowitz now works at New Scooters 4 Less, a local shop that sells and repairs scooters.

New Scooters 4 Less is known for advocating safety precautions. For example, in August 2017, the company gave away 300 free helmets to customers purchasing scooters who signed a petition promising to wear their helmet, said Michael Dees, general manager of New Scooters 4 Less. In addition, every customer who purchases a scooter also receives a tutorial, operation check list and test drive.

“There’s dedicated one-on-one instruction time with every single person that buys a scooter from us,” Dees said.

Dees said it’s important for customers to be cautious, but never fearful, when they are riding. And it’s also just as important to be comfortable with the helmet that they are wearing while riding.

“The safest helmet is the one that they are actually going to wear,” Dees said.

“And if they are not going to put that on because it’s too big to carry around or it doesn’t fit in their seat bucket or because they feel like it looks dorky, but they would wear one that just sits on top of their head, then that’s the one that they should get.”

Vanessa is a reporter for WUFT News who can be reached by calling 352-392-6397 or emailing news@wuft.org.
Previous Policy Changes, Programs Decrease Number of Gainesville Juveniles Getting Arrested
Next Final Two Readings On Gainesville’s Proposed Styrofoam, Plastic Bag Ban Scheduled For 2019