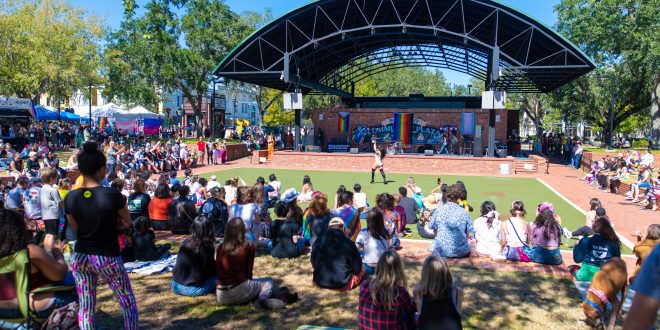 Bo Diddley Plaza filled up with colorful flags and smiling faces on Saturday from noon into the night for the Pride Festival.

The festival began with drag queens from all over Florida performing to a song of their choice. As the day went on, the turf field became a lively dance floor as people flooded in to dance to tunes by artists such as Shania Twain, Lady Gaga and other favorites.

DJ Mellow provided entertainment for the event and wore skeleton gloves with a gay pride flag and bucket hat.

Four food stands set up right outside the venue and some sold pride-themed food such as the Italian Ice truck which sold gay pride Italian ice. Vendors from jewelry shops to various church groups and political candidates spent their Saturday at Bo Diddley.

The festival coming back after a two-year hiatus because of the pandemic inspired many participants to show up for their first pride event ever, and clear blue skies and cool weather in the 70s set the tone for this community gathering.

This is Rachel Losacco’s first pride event; she came out in 2020 during the pandemic. She pops out in a crowd with her rainbow eyelashes and rainbow press-on nails.

“I love the weather; I love the vibe and I love dressing up more than I would at work,” she said.

As a bisexual woman, she said that she feels validated being in this space with other people.

“It’s about the look and it’s also about the identity,” Losacco said.

She said she has been waiting for months for the festival to take place because she is able to now come out to strangers and the community.

“I am ready to buy my first pride flag,” she said.

Losacco said that she sees online people talking about how when a person is bisexual that they are just straight or just gay but “going through a phase.”

Losacco was nowhere near the only first-timer; this was Joe Smith’s first pride event, too. Smith is a lead pastor for Shift Church, which is an open and affirming church working with PFlag and Pride. They had set up a table at the festival today where they were giving out free candy and water.

“We want to come out and support our people,” he said.

Sonic Drive-In donated candy and water bottles to Shift Church to give out for free during the festival. He said the general manager of Sonic is a part of his church.

“Anytime we have events, especially when it is tied to Pride or PFlag they [Sonic] donates stuff for it just to help support,” Smith said.

He said two years ago he started seeing how the American way of teaching in the churches toward the queer community was producing a lot of “bad fruit.”

“All of the negative experiences you can experience as a human go up exponentially as a queer person,” he said.

He said rates of suicide, depression and addiction go up even more for queer people who are in the church.

“It was an introspective moment,” he said. “Finally, we said we can’t support this anymore.”

Smith then came out with an open and affirming church within the last year.

“We felt like it was really important to not just say that but then to actually put in the work of undoing any harm that we were part of and helping build better structures going forward,” he said.

He began his involvement with Pride by reaching out to Tamara Perry-Lunardo, president of the Pride Community Center of North Central Florida, and starting conversations with her. He said Pride was so open and welcoming when he reached out.

“We think it’s important to actually show up,” he said. “That’s why we are here.”

This is Shift Churches’ first time at a Pride event.

“Everybody is just happy to be out,” he said. “It’s a beautiful day celebrating humanity and love.”

“Every year when the Pride Center has their Pride Festival event, they always hire us just for security,” he said. “We have the same amount of officers here as we do normally every year.”

He said he thinks that the turnout at the festival this year is more than in previous years because it hasn’t been on for two years.

Cavett is also one of the LGBTQ Community Liaison for the Gainesville Police Department.

“We are the go-between between the LGBTQ Community and the Gainesville Police Department,” he said. “If they need anything, they reach out to us.”

He said they formed this organization after the Pulse Nightclub attack in 2016. After this, he said the police lieutenant at the time directed officers to go to University Club in Gainesville to provide an added layer of security. Then there were town meetings with the Pride Center to open the floor for conversations.

“A lot of people in the Trans community were feeling uneasy like how they were going to be treated by the Gainesville Police Department,” he said.

From these issues being brought up, Cavett said the department created its Gender Expression General Order which is the new standard operating procedure for the department and how to treat people who use gender identity.

“Some of our officers now wear pronoun pins,” he said. “It might spark a conversation, so there is not an awkward interaction between a member of the community and the Gainesville Police Department.”

He also said that the Order outlines how individuals who have changed their name or pronouns since they filed a police report can go through a process and change their information to their preferred name or pronouns.

“We have just opened it up to try to get a more diverse group of people on our team,” he said.

Cavett said he did not know why Pride didn’t hold the parade this year like they have in the past.

He speculated that perhaps there were not enough volunteers to organize it this year.

Katalina is a reporter for WUFT News who can be reached by calling 352-392-6397 or emailing news@wuft.org.
Previous Gaetz, Jones argue in congressional debate over health care for veterans
Next The Point, Oct. 24, 2022: Special session for Hurricane Ian relief