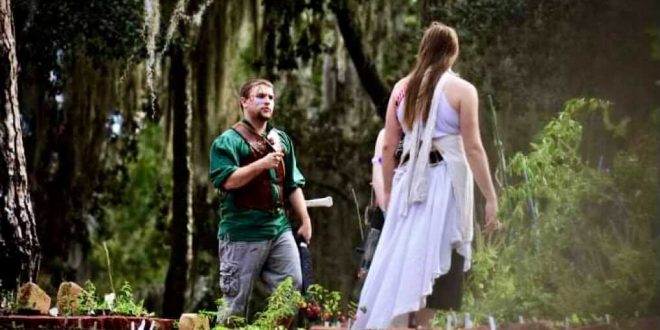 Kegan McConnell (left) strolls through Gatorland in 2020, just before the COVID-19 pandemic changed the operations of the imaginary underworld. (Photo courtesy of Kegan McConnell.)

Kegan McConnell spends his weekends in a dystopia covered in yellow and blue makeup. A sand dollar necklace adorns his sweat-drenched neck. He draws fake weapons. He bleeds fake blood.

During the week, he returns to his day job as a mild-mannered accountant.

McConnell, who role-plays as a human-fish hybrid smuggler named Snooks, found refuge from struggles with dissociation and anxiety among the nearly 1,500 members of the Dystopia Rising Florida Facebook group and community, a fully immersive live-action role-play — or LARP — game.

He found himself crying in a moment of catharsis during his first one.

“Almost every player has had that moment,” McConnell said. “I think there is a surprising amount of emotional growth that comes from running around whacking people with sticks in the woods on the weekends.”

Set in a post-apocalyptic world with 20 branches across the U.S – including Georgia, Florida and Texas – 50 to 120 members travel from across the state every month to camp together in the fictional town of Gatorland for a weekend. Here, they role-play as characters they’ve created — even when they sleep.

Every branch plays games in the same universe, yet each local community creates their own characters, lore and setting. Though basic storylines are written before events, weekend events are where the script ends and the improvisation begins.

Florida branch owner Bryan Murphy, 31, who considers himself an extroverted “teddy bear,” said he doesn’t fit the mold of the societal perception of someone who LARPs. But in the Dystopia Rising community, he is not alone in his individuality.

“We have doctors, we have lawyers, we have a congressman that LARPs with us,” Murphy said. “I’m a jock, and I like to LARP.”

Bethan O’Connor, the lead story writer for Dystopia Rising Florida, said their branch is the only LARP with more women than men participating. Many players are members of the LGBTQ community, as well.

The diverse group is a support system for the people involved and follows strict guidelines to protect the community while they defend Gatorland.

“We’ve always had this unique and special population that needs a safe place, and we have always fought tooth and nail to keep it in a safe place,” O’Connor said. “And whether that’s from bad people, predators, homophobes — or whether that be from COVID — we’re going to do everything we can, because it’s always people first.”

A dystopia in a mid-pandemic world

The COVID-19 pandemic continues to present challenges for the Dystopia Rising community. Because the campgrounds that typically host the games also host events for Marion County children — many of whom are too young to receive the vaccine — the October game that took place Oct. 22 to Oct. 24 was virtual.

Even though the game preceding Halloween is usually one of the largest events, and O’Connor and her team have been writing content for an in-person game for months, the safety of players and community members is the staff’s first priority, O’Connor said.

The approach she takes to game play mirrors her outlook on protecting her peers.

“We come from a people-first approach,” she said. “I care about my players, not the characters. I want to destroy their characters, leave them broken, screaming, crying, wondering what the heck I did — but at the end of that scene, I want my players to be in a great place.”

Starting in March 2020, the community played within the limitations of video calls on Discord, an instant messaging server commonly used in the gaming community.

O’Connor said virtual games are nothing like the real thing.

Murphy said staff members rarely leave their screens during virtual games. He and his roommate O’Connor stayed at a friend’s house to have someone prepare meals the entire weekend while they facilitated Discord calls during the September game.

Typical games, he said, are much more action-packed. His favorite memory was the culmination of an eight-year-long war on the grounds of a fictional world nicknamed “The Rat Trap.”

In live games, there is fake blood, there are real tears and there are hours-long battles, he said. In contrast, the digital format resembles a tabletop game with dice and discussion.

With 100% vaccination rates among members and nationwide lifting of mandates, the community held smaller in-person games in August and July, Murphy said.

About 50 people attended the weekend-long games on the Camp Kiwanis grounds in Ocala, and close to $3,000 was raised per game through ticket sales. The funds paid for the venue and for props that were damaged in 16 months of storage.

After both live events at Camp Kiwanis, there was not a single case of COVID-19, Murphy said.

Skye Rennolds, Murphy’s fiancée and a prop guide for the Florida branch, designed sanitation processes for gear and lodging that will continue even after the pandemic subsides. She sprayed hard props and costumes with a cleaning alcohol mixture and washed softer props with baking soda, vinegar and detergent.

The staff also implemented a wristband system to designate vaccination status so players could determine what level of physical contact they were comfortable with.

Despite taking precautions, a spike in delta variant cases in September forced the community to bring back the virtual Gatorland.

Until the return of in-person games, McConnell remains positive as the virtual October game approaches.

He says the virtual platform led to greater connections throughout the pandemic. Some players even ventured into virtual games in other regions, and McConnell has participated in online games presented by members as far as Texas.

“I’ve definitely made some friends over at other chapters that I probably would have only had passing interactions with in the past,” he said. “I feel like that interconnectivity has ramped up considerably during the pandemic.”

Avery is a reporter for WUFT News who can be reached by calling 352-392-6397 or emailing news@wuft.org.
Previous Through nature walks around Gainesville, the Joy Walk Club provides a space for relaxation and connection
Next Florida is facing a class-action lawsuit on juvenile solitary confinement