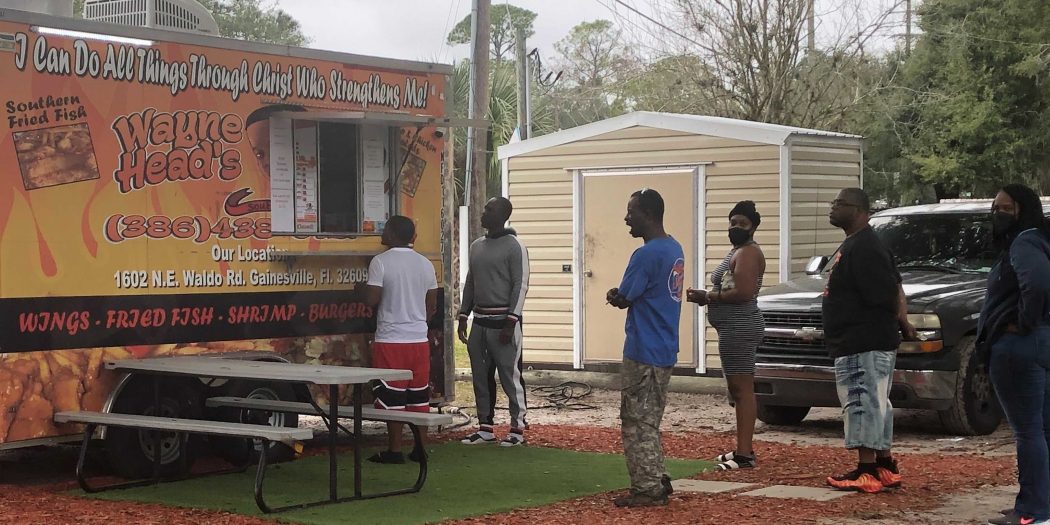 Customers wait in line for lunch at Wayne Head’s Southern Kitchen in Gainesville. “People have to get to know you and trust you,” said Demetrious “Waynehead” McGowan, owner of the food truck. “You have to put yourself out there.” (Samantha Chery/WUFT News)

‘One of the Best Years of My Life’: New Gainesville Black-Owned Food Businesses Flourishing

2020 brought about the need for social distancing and renewed calls for social justice, but it also ushered in a wealth of promise for Black-owned food businesses across north central Florida.

“This is one of the best years of my life, especially financially,” said Gregory Brown, 30, owner of Fat G’s BBQ & Catering in Gainesville.

Brown worked as a barber for 16 years and cooked food for people as a side job to supplement his income. But when the pandemic threatened the viability of area hair salons and barbershops, he stayed home and homeschooled his three children.

His wife Emma still had her job as a certified nursing assistant. But not only was Brown stir-crazy at the house, he wasn’t used to not being his family’s breadwinner.

“When I started selling plates, it was a way for me to feel like a man again,” Brown said.

The business became so popular that it overwhelmed his backyard smokers; he had to replace them with wood-fueled commercial ones. He started out under a barbecue tent but has since bought a food truck, which stops at local breweries and other buildings for additional business. It’s going well enough that his wife quit her job, and Brown has put aside his career as a barber.

In contrast to sit-down restaurants, the food truck scene never closed during the pandemic, Brown said. And although restaurants since September have been allowed to reopen to capacity, some people still favor the mobile, outdoor, grab-and-go experience provided by food trucks.

“This generation actually doesn’t cook that much,” he said of his customer base, adults in their 20s to 50s. “When everything was shut down, there was really nothing to do but get something to eat.”

Brown had examples to follow as he moved into the Black food truck arena, including an O.G. of the bunch, Antonio “Tony” Jefferson, owner of Swamp Religion and one of his past hair clients.

Jefferson, 32, created Swamp Religion in 2017, after his skills outgrew his decadelong career at The Swamp Restaurant. Over the years, he’s crafted a signature taste, look and smell for his food. His sandwich buns, for example, are stamped with the Swamp Religion logo.

As the food truck’s chef, scheduler and tax preparer, Jefferson said he has no days off. But he loves what he does – and doesn’t take being a Black entrepreneur in East Gainesville for granted.

“We’ve been getting a lot of business support … and we’re really happy and proud of that,” Jefferson said.

He said he’s shared his knowledge with other Black-owned food places that have popped up during the pandemic, such as Tim White’s gourmet rolls company, Whitey Rollz.

White, 33, learned how to make cinnamon rolls at 15 years old, while working at a restaurant called Grandy’s. After he left the job, he occasionally made rolls for his family.

Less income during the pandemic prodded White to start his own business selling them.

His classic rolls have walnuts, raisins and a cream cheese filling. Other flavors include strawberry shortcake, peach cobbler, pumpkin pie, confetti and two types of red velvet. Whitey Rollz also serves savory flavors, like pepperoni rolls and taco rolls, which are served on a bed of lettuce with diced tomatoes, cheese and sour cream.

White said he knows all the recipes from memory, but he also keeps them in a book and tests new flavors to rotate what’s on the menu. He’s also taught his children how to make the rolls.

Whitey Rollz hosts pop-up shops in Gainesville and other cities across Florida to try to fill the demand for the rolls. People from around the country have also asked to buy the pastries.

Another Black food entrepreneur, Demetrious McGowan, of Wayne Head’s Southern Kitchen on Northeast Waldo Road in Gainesville, said he’s not worried about too much competition.

“There’s too much money out here,” McGowan said. “There’s enough for everybody.”

McGowan, 31, used to be a DJ and worked at restaurants in the city such as Dragonfly Sushi and 4Rivers Smokehouse. Like Brown, McGowan sold his meals on the weekends as a side job, sometimes bringing food to sell at some of his DJ gigs.

After not getting the raise he felt he deserved, McGowan quit his last restaurant job and decided to become his own boss. In 2016, he opened Wayne Head’s Southern Kitchen.

Relying on his business for income was nerve-wracking and difficult initially, McGowan said.

But McGowan said he no longer needs any DJ gigs, thanks to a steady customer base for his food business and word of mouth.

D’Andre Franklin, 40, of Newberry, said his food place, 3K BBQ, is helping to revitalize East Gainesville. Helping Franklin run the truck is his son, Elijah, 20; one of his best friends, Terrance, 41, and his father, Elvis, 62, who’s worked for decades in the food service industry.

The food truck, which serves customers on Northeast Eighth Avenue, put Franklin on the fast track to business ownership without high rent costs, he said.

Franklin said he also hopes 3K BBQ will be more than just a barbecue place. He envisions buying the whole block that the trailer is on and opening a seafood restaurant and hair salon.

In addition to having the support of Black entrepreneurs, Franklin has also connected with the community through 3K BBQ, for example, by participating in the “Free the Vote” Rally last fall.

“We try to be an extension of family and friends,” he said.

Samantha is a reporter for WUFT News who can be reached by calling 352-392-6397 or emailing news@wuft.org.
Previous UF Professors On Edge As Student Bars Remain Busy
Next Citrus County Commission Passes Order To Collect Boat Ramp Fees