‘This Is A Disaster’: How Coronavirus Is Affecting Gainesville-Area Salons And Barbershops

The coronavirus outbreak has left barbershops and beauty and nails salons across north central Florida in a precarious position.

As salons nationwide have closed because of mandated social distancing – and with Alachua County’s stay-at-home order taking effect Tuesday – those working in an industry that relies on close, in-person contact are concerned for their livelihoods.

“Realistically, if they shut us down for three weeks, I could be bankrupt,” said Sueanne Kelsey, 51, a tattoo artist and nail technician who runs The Rare Bird Nail & Ink Studio in Hawthorne.

The drastic decrease in customers over the past two weeks has also left Kelsey worried about her studio, which opened last year.

“This is a disaster,” she said. “I invested everything I had to open it.”

Besides the state-mandated upkeep of the studios, Kelsey said she has focused exclusively on nail services and is only accepting appointments from customers she had before the pandemic.

Carlos Reyes, 34, a barber in Redemption Cutz Barbershop in the city of Alachua, has eliminated walk-in services and switched to appointments only, so he could dedicate more time to thoroughly cleaning. Doing so, Reyes said, however, COVID-19 could make it difficult to keep the shop, which he bought only four months ago, open for longer than a few weeks more.

“We are doing everything we can to stay afloat and make everything as safe as we can for our clients,” said Paige Norton, 31, a hair stylist at 1st and Main Hair Studio in High Springs.

Christine Patterson, a stylist at Studio B Hair Salon in Gainesville, said she has taken a three-step cleaning approach: Sanitize. Disinfect. Sterilize.

“I personally have gone through the salon and cleaned and disinfected everything!” Patterson, 30, of Interlachen in Putnam County, posted on her Faded & Tangled page on Facebook. 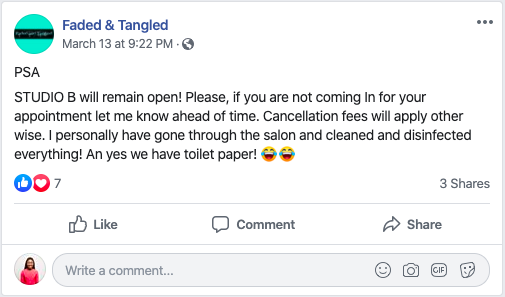 Seriously, while said she relies heavily on customers to maintain a steady paycheck, Patterson definitely wants them to stay healthy and safe.

“I do a lot of elderly clients, so I completely understand them being worried and more wanting to be quarantined to their own home,” she said.

As a worker unable to afford health insurance or get paid time off, Patterson said she hopes the government will financially help the beauty community.

Meanwhile, some regular customers have no issue with continuing their patronage.

Shelaine Reynolds, 33, an Alachua County Sheriff’s Office detention officer, said she goes to Gainesville hair salon Locs of Luv by Crystal, run by Crystal Hunter, 34, of Gainesville, every five weeks and Demode Nail Salon about every three weeks. She has no plans of stopping.

“As long as they are open, I will go,” Reynolds said. “I’m not afraid of the virus.”

However, others have been more hesitant. Richie James, 34, of Bronson in Levy County, about 30 minutes from where he typically does construction work in Gainesville, recently had to contemplate the implications of whether to get a haircut while in St. Augustine for a job.

“I would hate to go get my haircut … and pass it along to them unknowingly or vice versa,” James said.

He added: “I would hate to take it home to my wife or my kid. That would be my biggest fear.”

James said he ultimately decided to put health over appearance. If his hair gets too long, he said, he would wear a hat or have his mother cut his hair – just like she used to when he was a child.

Serenity Beauty Lounge nail salon in Gainesville was serving 10 to 15 customers a day, but that average has dipped to about four, said Sofia Lopez, 47, the owner and a local resident.

Lopez said many of the cancellations were from nurses and healthcare workers who have to stay extra hours at their jobs. She also worried about losing business from customers who are single parents. They must save more of their income for childcare now that schools are closed.

“Beauty and hair are the first things that go out when they’re not working,” said Lopez, who also noted she has lifted her salon’s no-children policy to accommodate those parents.

As a single parent herself, Sola Salon hairdresser Rachel Marie Schneider, 40, of Gainesville, acknowledged that the coronavirus news has made her anxious.

“I am the only income that takes care of my children,” Schneider said. “I’m more concerned about not being able to put a roof over their head and feed them.”

Now that gyms are closed as well, Schneider said she hasn’t been able to exercise to help her cope with these extra stressful times. Though first posting a message to her customers on Facebook – “I’m asking if you’re sick to stay home, and assure the same courtesy from myself! Let’s get through this together!” – she has also spent less time on social media.

“I’m just going to unplug, and everything’s going to be fine some way or another,” she said.

Samantha is a reporter for WUFT News who can be reached by calling 352-392-6397 or emailing news@wuft.org.
Previous Gainesville Businesses Help Schools Feed Students During Spring Break
Next Forced To Close Because Of COVID-19, Gyms Work Out Ways To Keep Workouts Going