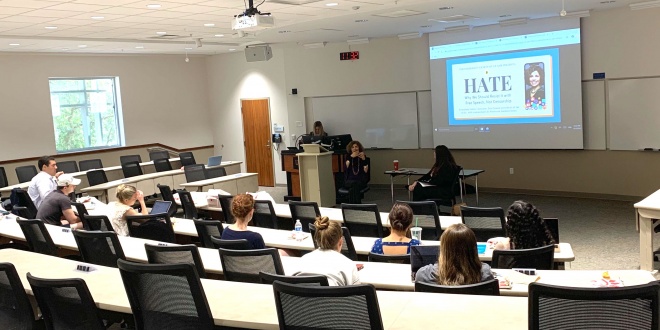 A little over a dozen UF Law students watched what is likely to be one of the final in-person lectures delivered on their campus in the 2019-20 school year. (Emma Davis/WUFT News)

Attendance was evenly divided between live and online viewers at a speech hosted Thursday by the Federalist Society at the University of Florida Levin College of Law.

Even in extenuating circumstances — with coronavirus fears sweeping the nation and forcing UF classes online only beginning on Monday — college students will still take risks for a free meal.

Gloster, though, did say he found Strossen’s speech interesting and was glad he stopped by.

Nadine Strossen is the former president of the ACLU and was its first female president, serving in that role from 1991 to 2008. She spoke for about an hour on free speech and censorship in the Holland Law Center on UF’s campus.

Kylee Sipowski, 24-year-old law student and junior president of the UF chapter of the Federalist Society, organized the speech. Sipowski said Strossen was paid an honorarium of $1,000 by the national Federalist Society for the speech and will be reimbursed for all travel expenses. The national group also supplied the money for Chick-fil-A. The conservative group has separately come to prominence nationally in recent years for its list of judicial nominees from which the nation’s governors and presidents often select.

The event was planned in January, Sipowski said, and was held on campus despite Wednesday’s news that classes are to be moved online and that students should return home.

“Both of our speakers were open to still participating,” Sipowski said, “so we didn’t see a reason to outright cancel.”

She said that normal attendance for campus Federalist Society speeches was about 35 to 50 people. Between online and in-person attendees, the speech had 35 viewers. Eight 8 of those who came in person were members of the Federalist Society.

Sipowski live-streamed the speech through Zoom — the online platform UF is requesting professors use to hold classes while the virus is being contained — and posted the link to the Federalist Society at UF Law’s Facebook page.

Strossen said she was also pleased with how the speech went.

“I hope people can enjoy the live stream opportunity,” Strossen said, “because health is even more important than free speech and equality. We can’t enjoy either if we aren’t healthy or alive.”

Strossen said she had dozens of speaking events planned for 2020, but they have now all been canceled through July.

“If organizers had not taken the initiative to cancel, then I would have,” she said. “We all have a social responsibility to contribute whatever we can by minimizing our own travel and contact.”

She opted for an elbow bump rather than a handshake when greeting students.

Emma is a reporter for WUFT News who can be reached by calling 352-392-6397 or emailing news@wuft.org.
Previous March 12, 2020 : Morning News In 90
Next Gainesville Celebrates The Female Pioneers Of Florida At The Matheson Museum