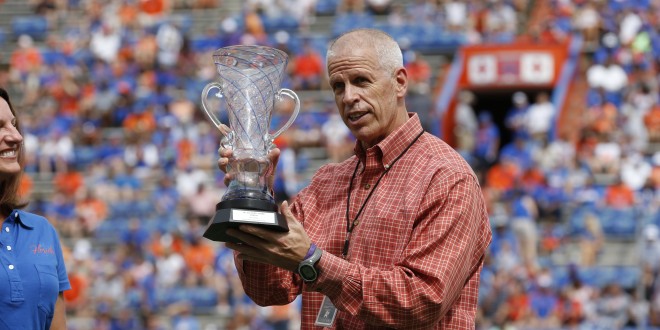 Jeremy Foley celebrates in the Swamp before the Gators' 65-0 win against the Eastern Michigan Eagles on Saturday, September 6, 2014 at Ben Hill Griffin Stadium in Gainesville, Fla. / UAA Communications photo by Tim Casey

GAINESVILLE, Fla. — After 25 years leading one of the most successful college athletics programs in the nation, University of Florida Athletic Director Jeremy Foley announced his plans to retire to Gator coaches and staff Monday morning.

He will hold a press conference at 5 p.m. Tuesday on the press deck of the football stadium, according to a news release. Foley, 63, will continue as athletics director until Oct. 1.

He will stay involved with the University as Emeritus Athletics Director, which is part of his current contract agreement.

“After a long period of thought and consideration, I have made a decision to retire as the Athletics Director effective October 1, 2016,” Foley said in the release. “As difficult as a decision it has been to make, I know the time is right. … But now it is time for me to step aside. I firmly believe that after 25 years with one leader, new thoughts and new ideas will continue to move this program forward.”

“Success to Jeremy is a student athlete who graduates and wins championships in the right way,” Fuchs said. “That is the culture he created here over his 25-year career and it is what we will remember about his remarkable tenure as Athletics Director.”

When he became Florida’s athletics director in 1992, five sports had given the Gators their nine national titles. Now, Florida has 36 national team titles in 13 different sports, including Florida’s claim of the 2006 basketball and football titles — the only program ever to win both championships in a single year.

Florida has won a national championship in each of the last seven years and captured 14 national team titles since 2009, tied for most in the nation.

Foley is the second-longest tenured athletics director in a major conference. He also oversaw a budget that grew from $30 million in the 1991-92 academic year to $119.3 million for the upcoming season.

Previous Here’s What We Know About The Orlando Shooting Victims
Next June 13, 2016: News In 90

The National Hot Rod Association will host its 51st annual drag race, Gatornationals, at the Gainesville Raceway from Thursday to Sunday.