Nora O'Neill
Floridians traveling for the Thanksgiving holiday could run into heavy rain, flooding and busy roads along the way. This could be the busiest week of Thanksgiving travel in Florida since 2005, according to AAA. A staggering 2.9 million drivers are expected to travel 50 miles or more for the holiday. A stalled front and a ridge of ...

Justin Ballard - FPREN
Downpours could lead to localized flash flooding through midweek along the I-95 corridor, potentially slowing down traffic for people traveling ahead of the Thanksgiving holiday. Surface analysis Monday afternoon depicts a stalled frontal boundary across South Florida and an extended ridge of high pressure across much of the Southeast. These two features will act in tandem ...

Melissa Feito - FPREN
Florida is looking at a warmer and drier than average winter season according to outlooks from NOAA. This follows a trend of higher-than-average temperatures in the last month and a drought persisting on the Panhandle due to low precipitation rates. Hurricane Nicole helped alleviate dry conditions mostly across Central and North Central Florida. Chris Fuhrmann, a ...

Denise Vickers
CAPE CANAVERAL, FL – Cheers and applause erupted from spectators at Kennedy Space Center in the pre-dawn hours Wednesday morning as NASA’s Artemis I blasted off from Launch Pad 39B. The launch paves the way for the space agency to return astronauts to the Moon and later onto Mars. The Space Launch System – NASA’S most ...

Denise Vickers
CAPE CANAVERAL, FL – History was made Wednesday morning as NASA’s Artemis I moon mission blasted off from Kennedy Space Center. This was the program’s third launch attempt after the mission director scrubbed the first two launches due to fuel leaks. Artemis I is an uncrewed test mission for the program that will ultimately return ...

Kalisha Whitman
It’s been nearly 50 years since any person last touched the surface of the moon. As NASA prepares to give its Artemis program another attempt at making a historic launch, the broadcast of the launch will make history in its own way. Viewers will be able to see the most powerful rocket ever built in 4K ... Melissa Feito - FPREN
Several bridges and roads on the Space Coast and First Coast were closed Thursday following flooding and erosion from Tropical Storm Nicole. The storm made landfall in Florida as Hurricane Nicole near Vero Beach early Thursday morning. Now downgraded back to a Tropical Storm, Nicole is nonetheless bringing serious beach erosion to portions of the Atlantic ... 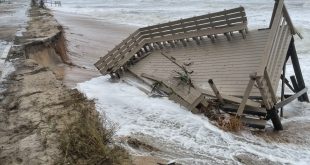 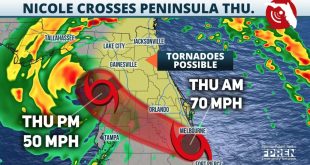 Justin Ballard - FPREN
Hurricane Nicole made landfall Thursday at approximately 3 a.m. near Vero Beach and will continue to bring rain, wind, and an isolated tornado risk to the central and northern half of the state through Thursday. Hurricane warnings remain in place from Daytona Beach to Boca Raton. This region of the state is most likely to experience ... 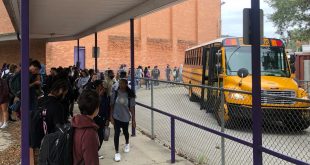