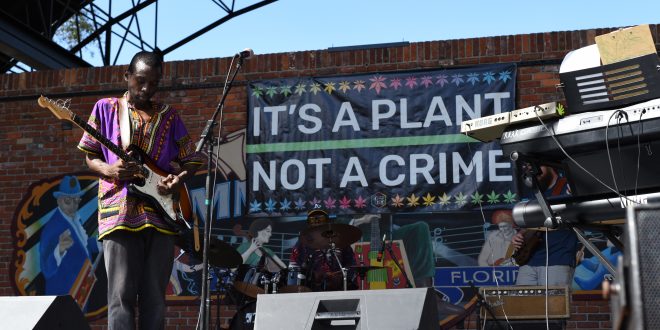 Dozens of people attended the hemp fest at Bo Diddley Plaza on Saturday in downtown Gainesville, marking the return of an event from years past. (Julia Coin/WUFT News)

Loose joints, tattered cushions and a conga drum replicated a famed 1990s Gainesville living room — dubbed Fort Ganja — in downtown Gainesville Saturday. Stocked with more than 1,000 cannabis cigarettes, the city’s original “doobie tosser” was poised to recreate the stunt that led to his arrest and police crackdowns on marijuana 30 years ago.

But Hemp Fest’s crowd, he said, didn’t warrant it.

He wanted to get arrested, he said. He wanted the opportunity to challenge the criminalization of marijuana in the Supreme Court.

According to Watkins, organizers passed out 300 joints in 1992 and upped it to 1,000 in 1993. In 1995, the year after Watkins’ arrest, they threw doughnuts to avoid further confrontation with police, who were outfitted in riot gear.

At this year’s fest — held just weeks after Watkins’ 2019 marijuana charges were dropped — 1,300 were toss-ready. The crowd of at least 100, comprised mostly of organizers and original fest attendees, did not warrant an orchestrated disbursement, Watkins said.

“It wasn’t going to happen today,” he said. “There were no people.”

While the political and legal landscape surrounding marijuana has shifted since Hemp Fest’s glory days, Watkins found himself surrounded by old peers who continue to fight for the complete legalization and decriminalization of marijuana. It was like a reunion, he said.

A difference in culture and community could explain why younger, college-aged people didn’t populate the plaza, said MaiTreyi Michel-Trapaga, Watkins’ 27-year-old daughter. Her parents had to find a community in order to fight the stigma associated with marijuana. Today’s youth — who are more isolated in a post-COVID world — might sit comfortably with the legalization of medical use, but Watkins’ generation remembers what was required to get to this far.

Just two Gainesville Police Department officers were present at Hemp Fest in Bo Diddley Plaza Saturday — one day after two officers were suspended after an internal investigation unveiled inappropriate messages about Terrell Bradley, a Black Gainesville resident who was mauled by a police K-9.

The two officers left about halfway through the event, while vendors, volunteers and locals populated the square from noon to 4 p.m. before relocating to a smoke-friendly afterparty in Depot Village.

The crowd and atmosphere differed from his last experience at the 1994 fest, Meyers said. When a friend led him to a teepee in the middle of the packed plaza, he didn’t know what he was getting himself into; but he accepted the bag handed to him and started dispersing its contents at 4:20 p.m.

“Florida’s going to have to catch up to the rest of the country,” he said. “There’s a ton of money they could be making off of it.”

While Florida is not included with the 19 states and the District of Columbia in legalizing recreational use of marijuana, it legalized medical use in 2016. At least 15 dispensaries populate Gainesville, and recent local reforms made possession of 20 grams a civil rather than criminal offense.

Education, she said, is key, adding that people should understand access to medical marijuana can mitigate risks of buying weed and other drugs off the streets that could be laced with deadly substances, such as fentanyl.

“I would charge them an arm and a leg,” DeSantis told reporters Aug. 25. “I mean, everybody wants these licenses.”

The emergency rule — announced Aug. 26 and effective Aug. 29 — set a 70-day total supply limit of 24,500 mg of THC for non-smokable marijuana and established dosage caps for different routes of administration such as edibles, inhalation and tinctures.

Years of activism has won them medical use, but there’s still more to do, James said.

“It’s still illegal, and it is still selectively being enforced,” James said. “And while I could probably walk down the street smoking a doobie, if we were in a different neighborhood, I would go to jail.”

While statewide marijuana arrests have dropped, thousands are still arrested. In 2018, about 38,000 people were arrested under marijuana possession charges. By 2020, that number dropped to about 18,000.

Though Saturday’s organizers announced smoking and vaping was not allowed at the plaza, some attendees took to the surrounding sidewalks to celebrate the anniversary of Watkins’ arrest.

“I followed the smell from around the corner,” said Brenden Gonzalez, a 21-year-old Gainesville resident.

In moderation, Gonzalez said, weed can be very cathartic, tranquilizing and euphoric. Throughout his youth in Miami and his recent move to Gainesville, he said, police have never given him a hard time for smoking.

“Too many people are being arrested, incarcerated and losing their careers due to outdated policies that seek to criminalize and demonize a largely victimless act,” said Rep. Yvonne Hayes Hinson, D-Gainesville,

Miller refuses to buy into the extreme division along party lines, he said.

Julia is a reporter for WUFT News who can be reached by calling 352-392-6397 or emailing news@wuft.org.
Previous Alachua County making plans for conservation of crucial new property near Hawthorne
Next North Central Florida Blues Society keeps genre alive at showcase in Gainesville