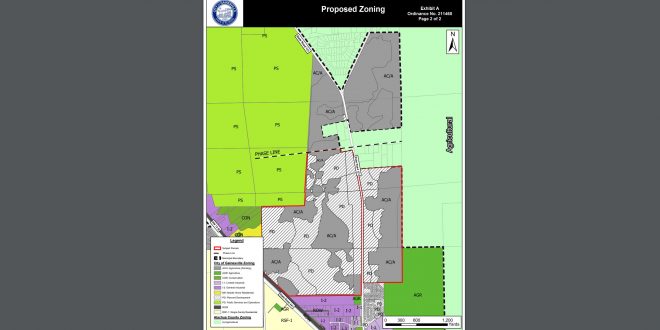 A map shows the proposed rezoning areas for Weyerhaeuser property that the city will begin to consider this week. (Courtesy of City of Gainesville)

One of Gainesville’s largest rezoning proposals is set to resurface this fall, starting at a City Plan Board meeting Thursday.

The proposal reignites a debate over the potential for large-scale development in the northern edge of the city.

Three years after the Gainesville City Commission rejected a proposal to rezone close to 2,000 acres of land near State Road 121, Weyerhaeuser, the largest private owner of timberland in the United States, has come back to amend the plan for another presentation.

Weyerhaeuser attempted to litigate the issue in 2020 following the rejection, suing the city for what they said was a lack of evidence to support the decision to do so.

The City of Gainesville determined that the plan was inconsistent with its policy goals of prohibiting urban sprawl and having the protection and promotion of transportation choices, according to court records from the Division of Administrative Hearings.

The case was settled in 2021, with the city winning.

Concerns were raised over the original proposal by residents of the area back in 2018 and 2019, citing environmental issues that the logging and development projects would have on the area, as well as issues with the land becoming more prone to severe flooding after development.

Weyerhaeuser is proposing to the board that the land be rezoned from single-family and residential low density to mixed-use office residential zoning. This decision would more than double the dwellings per acre in some areas being considered for rezoning.

The City Plan Board is set to meet at 6:30 p.m. on Thursday to discuss the proposal and vote on a recommendation to send to the city commission, which has final say.

Bryce is a reporter for WUFT News who can be reached by calling 352-392-6397 or emailing news@wuft.org.
Previous College Board National Scholars program recognizes Alachua County students for academic achievement
Next Florida Bar Exam scores announced, with UF having second-best passage rate