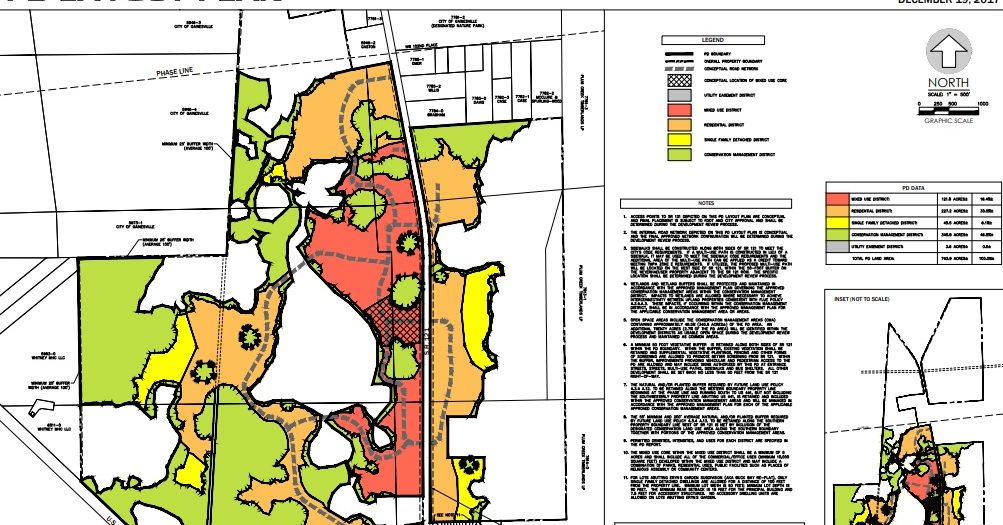 The Gainesville 121 planned development zoning petition was presented to the city plan board last year. Tim Jackson, Weyerhaeuser project manager for rezoning, said they will hold off on the rezoning process until their conservation management plan is approved.

This story is a part of Untold Florida, a WUFT series based on audience questions. Audience member Rick Luckhardt asked us, “What are Plum Creek’s plans for the property on State Road 121 between Gainesville and La Crosse?”

After nearly 25 years, a massive mixed-use development planned for a 1,779-acre site east and west of State Road 121, about two miles north of the northwest Gainesville Walmart, still has a long way to go.

Weyerhaeuser, which owns the site, is the largest private owner of timberland in the U.S. with more than 13 million acres of forests. In October of last year, the company petitioned to rezone the agricultural land to planned development, Eddelton said.

The rezoning would allow for single residential, multi-family residential, mixed-use development and conservation management areas on the site containing wetlands and nearly 1,200 acres of planted pines.

Eddleton told the City Plan Board in October that one of the challenges the project is facing is balancing the needs of the existing timberland and forest-management operation with “the needs of a healthy, sustainable and desirable urban environment and natural environment for the future.”

He said Weyerhaeuser’s report outlining its plans for the development has some elements that would impact environmentally sensitive areas and would conflict with some of the future land use requirements of the comprehensive plan.

The Gainesville City Commission was scheduled to discuss the rezoning at its Jan. 18 meeting. However, Weyerhaeuser decided to postpone its presentation on the rezoning application.

Tim Jackson, Weyerhaeuser project manager for rezoning, said the company will hold off on the rezoning process until their conservation management plan is approved.

“City staff has recommended approval for rezoning to the plan board, with just one issue being their concern about how much land and where and what would continue in perpetual silviculture,” Jackson said.

“Silviculture is an agricultural activity … it’s already on the piece of land. There are already 1,000 acres that are in active silviculture as planted pine plantation,” he said. Weyerhaeuser will submit this management plan to continue to harvest these pines and replant them.

There are two conservation easements to the east and west of the project boundaries which currently allow continued forestry activity, Jackson said. The management plan will propose perpetual harvests on the property adjacent to these easements.

In the city zoning code, silviculture is not listed as an allowed use in conservation zoning, he said. However, if their management plan is approved, silviculture could be allowed.

“There isn’t any silviculture activity anywhere else in the city … there’s nothing that got a future land use designation of conservation that previously was in silviculture. That just hasn’t happened before,” Jackson said. “This piece of land doesn’t fit in with what the city staff is typically looking at.”

Greg Galpin, senior manager of planning at Weyerhaeuser, said the lumber from the silviculture practices in these areas typically go to sawmills and pulp mills to be processed into structural lumber and paper products.

“They have to, by their conservation plan requirements, have 40 percent of their upland areas preserved and that includes areas in silviculture,” said Brown, who noted that the city needs the company to better articulate what forest-management activities are being proposed in which areas.

The natural resource assessment includes impacts to 165 acres of wetlands. These acres consist of wetland areas that were cleared of cypress back in the early 2000’s, then bedded and burrowed in order to make them accessible to plant pine trees, Brown said. The logging resulted in some altered hydrology of the wetlands, but they are still “quality wetland systems,” he said.

“When they first harvest the pines, they have to also remove any other trees and shrubs that have grown up,” Brown said. “They have to remove all other vegetation and they have to bed up, basically rebuild, those beds and that brings the soil back up and disturbs the soil.”

In this process, the vegetation that has been able to naturally restore itself over the past 15 years is impacted again, he said.

The city proposed a compromise to allow Weyerhaeuser to remove pines in a single harvest and then permit the wetlands to restore naturally to prevent the logging from resulting in a subsequent impact on those same wetland systems, he said.

“We are looking at a concept plan that is not going to be implemented for many years,” Brown said. “And a long schedule of construction over three decades.”

Ellen is a reporter for WUFT News who can be reached by calling 352-392-6397 or emailing news@wuft.org.
Previous For Windsor And Rochelle, Citrus And Weather Shaped Future
Next Meridian Behavioral Healthcare Expanding Due To Increased Needs