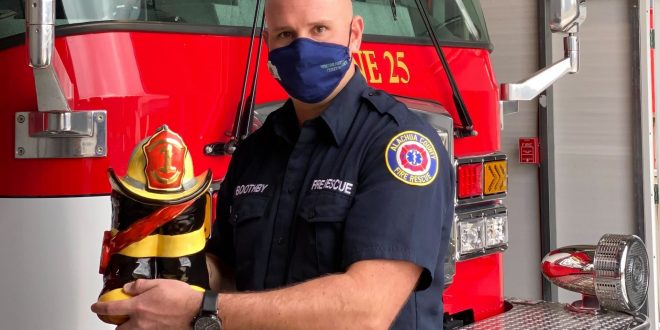 After his alarm goes off, he makes coffee, checks on his pets and packs a duffle bag of clothes for his workday. Once arriving at the Alachua County Fire Rescue Station 25, he and his team ready to respond to any emergency calls that might come in.

Now, his days are spent on the seventh floor of UF Health Shands Hospital’s south tower– banjo in his hand–connected to a medical fluid machine. Boothby is awaiting a bone marrow transplant.

Following Brandon’s diagnosis of aplastic anemia, Alachua County Fire Rescue Chief Harold Theus posted to Facebook, calling the community to pray for Brandon’s health and register their bone marrow to see if they are a match for the 29-year-old. The post received over 1,000 shares and over 150 comments from community members.

“I had no idea the community would react the way it is,” Theus said.

Every hour, Theus checked the post. He watched the number of shares and comments climb by the hundreds.

“I usually post about football and vacations,” Theus said. “But I felt like it was my duty to share his story, because he is one of ours. I underestimated the impact that Alachua County Fire Rescue’s social media page has.”

According to The Aplastic Anemia and MDS International Foundation, aplastic anemia is a rare condition where bone marrow fails to make enough red and white blood cells and platelets. Between 600 and 900 people are diagnosed every year in the U.S.

He was admitted to the hospital’s Emergency Department on Feb. 1, 2022 with flu-like symptoms. Eventually, four separate physicians told him to prepare for Leukemia. But when all tests came back clear, doctors diagnosed Brandon with the rare bone marrow disease.

Because he is immunocompromised as a result of the disease, Brandon is out of work and in isolation. His absence comes at a time of increased need for AFCR presence.

Brandon and his wife Lauren welcomed their first child, Carter, on Christmas Eve 2021. Now, he sees his daughter via FaceTime.

“The amount of time not spent with her is almost exceeding the time I have spent with her,” he said. “It makes me so sad thinking about it. It’s one of the worst parts.”

Lauren Boothby, 25, said the way Alachua County is rallying around her husband and family reflects how Brandon would show up for anyone in his community .

“His second nature is helping those around him,” she said.

And he has done just that with ACFR for the last six years.

“From a young age, there has always been a rewarding feeling of serving,” Brandon Boothby said. “You don’t look for anything back from it, just that good feeling in your soul.”

While hospitalized, he has remained optimistic and committed to daily prayer, leaning on music, family and his faith.

Brandon grew up playing the banjo, but lost touch with it over the years. He said this time has given him the opportunity to reconnect with his lost passion.

“We draw a little crowd in the room, nurses look through the windows and I play,” Brandon said.

He said finding a temporary escape distracts him from his current reality.

“There was nothing I did to cause this,” Brandon said. “I tried to live healthy, I go to my doctor’s appointments, and they say, ‘good job.’ And now all the sudden I have this rare disease.”

The Fire Rescue Professional of Alachua County union held a  charity fundraiser Wednesday at David’s BBQ.  Twenty percent of the sales were to be donated to Brandon.

“Brandon, we’re here with you brother,” the union wrote in a Feb. 6 Facebook post. “Nobody fights alone.”

Chief Theus thinks it is important to invite the community to support heroes like Brandon.

“I think the good of it is the pulling together of the community and the encouragement that they have felt and how strong and tight our community is,” Theus said. “Not only of public safety and fire rescue individuals, but of citizens.”

Lauren said she finds comfort and encouragement to push forward each day in the online support she sees.

She hopes that people continue to register to see if they are a bone marrow match not only for Brandon, but for others in a similar situation.

Registration and testing is simple, quick and noninvasive, and has the ability to save so many lives, Theus said.

Brandon said the community reaction to his situation shocks and humbles him.

“The community reaction gives me chills,” Brandon said. “And at the same time, I feel like I don’t deserve it. It’s so humbling.”

For more information on registering to find a bone marrow match, click here.

Emily is a reporter for WUFT News who can be reached by calling 352-392-6397 or emailing news@wuft.org.
Previous Fort McCoy horse rescue continues to trailblaze amid debt
Next Gainesville High School student earns top score on international exam