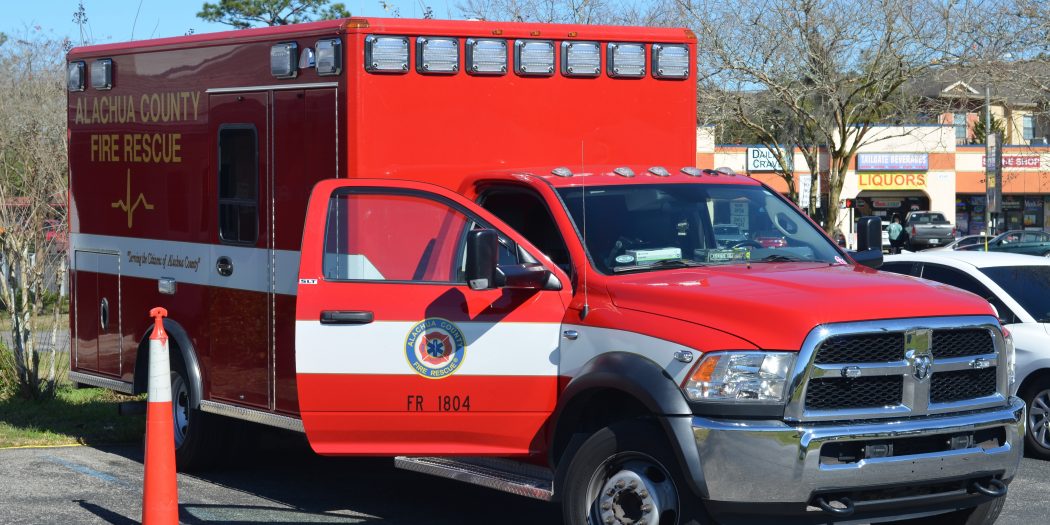 A new truck is on its way to Station 80, but for now, the new rescue unit will operate with an older truck. “I’m really looking forward to reducing the workload for employees,” Alachua County Fire Chief Harold Theus said. “But you also improve patient care by them having a much more positive attitude because they’re rested.” (Christopher Will/WUFT News)

The new crew, called Rescue 36, is a 24-hour rescue unit. Its addition in January to Station 80 aims to relieve the preexisting crew’s (Rescue 80) workload, reduce response times and improve the quality of care for patients.

Station 80, located at 2000 SW 43rd St., resides on the southwest side of Gainesville, an area ACFR Chief Harold Theus said is experiencing both residential and retail growth. He said this growth has made Station 80 the busiest location in the county.

“Having another rescue in that territory really assists that crew, but also our response times,” he said.

The addition of Rescue 36 places a total of two rescue units and two fire rescue trucks at Station 80. The new crew, which will operate 24 hours a day every day of the year, can respond to medical emergencies, fires and transport patients to the hospital.

The addition of Rescue 36 needed approval from the Alachua County Commission. Funding for the new crew was added to ACFR’s 2022 budget proposal in March, which the commission passed unanimously on Sept. 28.

With funding for Rescue 36 approved, it became the responsibility of the county manager, Michele Lieberman, to put the plan into action.

“Public safety is incredibly important to the Board of County Commissioners, so we do our best to make sure the needs of the people in public safety are met,” Lieberman said.

Alachua County Fire Rescue Assistant Director Cheryl Ellis said the new unit will have a recurring cost of about $820,000 each year, with about $680,000 going to personnel and $140,000 going to operating costs.

Lieberman said some of the funds to get the project moving forward came from Alachua County’s share of the American Rescue Plan.

It’s a move Rescue Lt. Ryan Olding said ACFR firefighters appreciate. Olding, who works at Station 23 but has used some of his mandatory overtime to help alleviate Station 80’s workload, said getting the additional unit will help fire rescue personnel provide the best care they can.

“Rescue 80 is a very busy rescue, so when they’re out on a call and transporting to North Florida [Regional Medical Center], or [UF Health] Shands or any other facility, they’re out of service for approximately 45 minutes to even an hour-and-a-half,” Olding said. “That means in this zone, there is no rescue.”

Station 80 is located about 2.5 miles southeast of North Florida Regional and 3.7 miles southwest of UF Health. With only one rescue crew at its disposal, the station would be left unavailable to respond to other calls in its jurisdiction when transporting patients to these hospitals. As a result, other nearby rescue crew would have to step in and respond to calls outside their coverage area. This meant delayed response times for those in need all over the county.

Lt. Justin Largay has worked at Station 80 for the past seven months. He said the impact of the new unit will be felt beyond just Station 80.

The additional unit, and staff, will also allow Rescue 80 more time between calls. Olding said working in a high-volume area without any assistance can be physically draining for the staff.

“When you’re running such a high volume of calls, that’s no sleep and your employees get sick more frequently,” Olding said. “You start running 15 to 20 calls each shift, or more, that’s a lot. That’s your entire shift for 24 hours.”

Citing an increase in ACFR unit responses from pre-pandemic numbers, the county commission has also approved adding a second rescue unit to Station 23, the second busiest station behind Station 80, later this year.

Olding, who works primarily at Station 23, is pleasantly surprised by the commission’s efforts to provide ACFR reinforcements during this time.

“I’ve worked for 17 years, and it is very rare that departments add on units,” he said. “The commissioners and the chief doing this is wonderful.”

Christopher is a reporter for WUFT News who can be reached by calling 352-392-6397 or emailing news@wuft.org.
Previous Why your favorite grocery items may not be in Gainesville stores
Next Prosecutors charge prominent real estate brokers with racketeering, stealing trade secrets