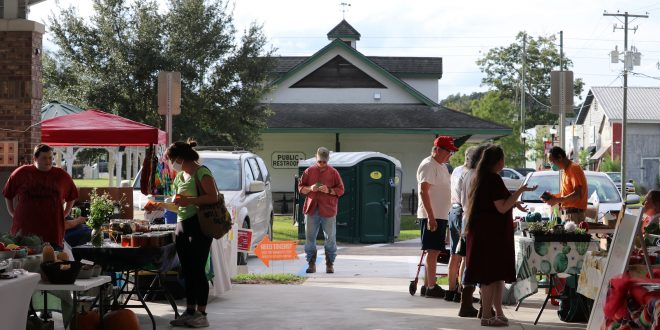 High Springs Farmer’s Market reopened Friday afternoon with a long-awaited pavilion. Customers were thrilled by the shade and cohesiveness of the event. (Asta Hemenway/WUFT News)

Starting at 3 p.m. and lasting four hours, parents bounced from table to table as their children tried to escape tight grips, often successfully galloping away to see Missy, the dog, or give wide-eyed stares to illuminated honey under the glowing sun.

A few minutes before 6 p.m., newly-installed fans and fluorescent lights lit up and lined the 100-by-30-foot structure as those just getting off work trotted in before the market closed at 7 p.m.

The only farmer’s market in High Springs reopened at a new location at the corner of Northwest 185th Road and Northwest 235th Street with a green-covered pavilion, ceiling fans, finishing brickwork and fluorescent lights.

Rowan said last week, at its usual location in the city hall parking lot, the market made $45 more than the entire month of October last year. She said she believes the pavilion will double the market’s profit margins.

By 5:30 p.m., the skies darkened to a blue hue. Anyone not under the pavilion was drenched in a cold downpour. The market stayed open while the rain raged on for another hour.

Before the rain started, customers said the scene was beautiful and comfortable.

Chad Mobley, a local resident who was trying to buy produce, was at the market with his son, a 2-year-old, who escaped from his father’s grip every two minutes and ran a few tables down to Ryan’s Honey Farm LLC.

“It’s been hard for him,” he said as his son dashed to the honey. A lack of social interaction with other kids has been rough.

As an only child cooped up during the COVID-19 pandemic, Mobley said his son enjoys being outside in the shade provided by the new pavilion.

For most customers there, the general favorites were the honey and the noticeably absent shrimp.

One mother, Julia Guinn who lives within a few miles, was with her husband and 4-month-old baby. The family, who last visited the market at city hall, wanted to taste honey and buy shrimp.

Guinn, who tried on rings from Sanna’s Rocks, a jewelry and rock vendor, said the shade is the best part of the new structure and the hours are great.

“It’s after work, and it’s a Friday,” she said adding that her child goes to bed before 7 p.m.

Several customers were former vendors and long-time friends of Rowan’s.

Luigi Benitez, a former vendor who sold pinchos for four years, said he was waiting for the pavilion to open and is good friends with Rowan and other farmers and vendors.

“The farmer’s market is making a step forward,” he said.

David Campione, a local resident who used to sell photographs at the market, chatted with Rowan. As a customer, he was hoping to eat some shrimp from the missing vendor and buy produce for his homemade vegetable soup.

“Look at the fans, the only thing they don’t have is the air conditioning,” Campione said laughing, “look at the lights.”

“I know, I know,” Rowan said, giggling. She added that she hopes more people will visit because the market is open late and the fluorescent lights make it safer.

“To see everybody here, it feels cohesive now,” he said, adding that when he worked for the market previously, everyone was spread out. Now, the place looked much busier because vendors were closer together under the pavilion.

All 20 or so vendors were thrilled that setup was easier because of the long-awaited pavilion.

“I didn’t have to put up a tent,” said Sanna Saare, the jewelry and rock vendor.

Allyson Senterfitt, lives in Newberry and owns Geek Alchemy, which sells handmade soaps based on shows like Supernatural and Doctor Who. She said since February she’s been at the city hall location where the asphalt is unbearable.

“It’s nice to not have to lug our tent around, that’s for sure,” she said. “It’s nice to have electricity and get some fans going up in here.”

Senterfitt said the pavilion will bring more people to her table.

“It’s nice to get the traffic and the ability to have people try out my soaps,” she said.

James Turner of Turner Farms sells produce and grows about 70% of everything he sells.

“This year? Oh my goodness it’s been hard,” he said. “Nobody wanting to get out and buy anything, and I can’t blame them.”

Gabriela Gonzalez and her mother from Mexico have since August sold tamales — steamed dough with a savory filling wrapped in a corn husk. Gonzalez said the pavilion brings everyone together.

“Everyone is more tighter, more talking to each other more, and more close,” she said.

Another produce farmer, Ramon Angeles of Angeles Farms, wasn’t as crazy about the setup. Angeles, who has sold with the market for more than 12 years each week, said while the building is beautiful, the tables are closer, there is no social distancing and some people aren’t wearing masks.

“It’s too little, I don’t like it. There is supposed to be space for each vendor,” he said. “You got the enemy that you don’t see.”

During the rain, a few vendors on the outskirts were flooded as white tents turned brown from encroaching mud. Without the pavilion, half of the people would leave, Rowan said. Instead, people lightly packed and waited.

“That’s the whole idea of the pavilion,” Rowan said. “You can still be there if it rains.”

The market will have a bigger grand opening Oct. 27, she said. Several local politicians and Alachua County Sheriff-Elect Clovis Watson plan to attend.

“We’re gonna have the big scissors and everything,” she said.

Asta is a reporter for WUFT News who can be reached by calling 352-392-6397 or emailing news@wuft.org.
Previous Gainesville’s Regal Theater Locations Close Once Again
Next The Point, Oct. 12, 2020: Families Of Florida Prisoners Find Additional Restrictions As Visitation Resumes