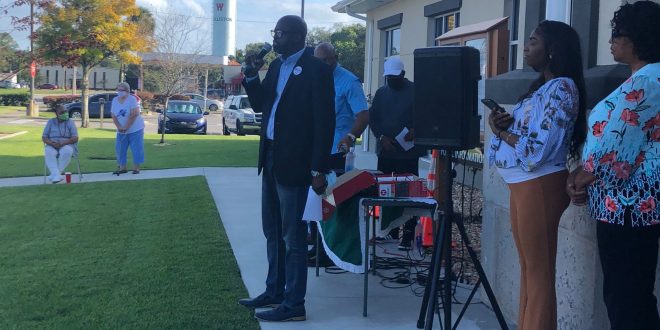 Pastor Johnnie Jones III delivers a sermon to attendees of the prayer vigil, where he was one of seven pastors to speak at the event. (Jordyn Kalman/WUFT News)

Pastor Johnnie Jones delivered his sermon with passion, his voice echoing through the parking lot outside Williston City Hall.

As he spoke, the crowd reached toward the sky, clapping their hands together and chanting “Amen.”

This is not Jones’ typical sermon venue, but his conviction was just as unwavering as a Sunday morning.

Over 75 Williston residents gathered for an hour on Tuesday at 5:30 p.m. in front of City Hall for an hour to pray for unity, justice and racial harmony in their community. The event was organized by The Ministerial Faith Alliance Inc., a private, non-profit charity dedicated to community empowerment.

MFA Inc. is run by faith leaders of predominantly African American congregations in and around Williston. Jones has served as the president since the organization’s creation in 2013 while still working full-time as a Pastor at Fountain of Life Church, where he has preached for the past 20 years.

The vigil was held in response to the current political turmoil, racial unrest and violence in Williston, Jones said. Two women sang a prayer song to start off, followed by seven pastors delivering sermons and then ending with a moment of silence.

“I believe that that protest is at the very root of what has made the United States a great nation,” Jones said. “Now, protest has led to a prayer test.”

Jones deliberately scheduled the vigil at the same time as the Williston City Council meeting to make a statement, he said. City council members were forced to walk through the crowd of people praying in order to reach the front door of the building.

The disparity between the quality of life, resources and infrastructure between East and West Williston has always been a problem for the community, according to Jones. Recent events have only highlighted this divide.

“We’re seeing the same issues that are facing the nation right now surfacing in our community,” Jones said. “We’re feeling the strain of police responses that are not always appropriate. We’re hearing very clear opposition to Black Lives Matter at gatherings.”

Two separate shootings in early September, one at a peaceful protest turned block party and one at a party in Levy County, sparked racial tensions. Community members have criticized police responses to both shootings by saying that Black violence and partying narratives are pushed harder than white narratives of the same nature by law enforcement.

As a faith leader, Jones believes it’s his job to broker peace and protect the community’s overall safety and happiness, he said. He wants to provide the community with safe, peaceful events that allow citizens from all generations, races and ethnicities to stand together.

“The pot doesn’t have to boil over,” Jones said. “Just because it’s a heated time, we do not have to end up in pressure-cooker situations.”

Jones hopes to see social justice reforms, more civic engagement from the community and increased diversity in leadership positions come as a result of his sermons. He plans on holding more events like this and continuing to use his faith to push for change.

“Jesus was, in a political context, considered an activist,” Jones said. “If we are going to allow our faith to inform us, it will say we should get involved and stand for the same ideals.”

City Councilwoman Debra Jones arrived early to City Hall so she could participate in the prayer session before the start of the council meeting. She felt that it was important to show her support for this event as a Christian woman and a leader in the community.

“This was the perfect opportunity to pray together,” Jones said. “This is what we need to be doing together right now.”

Coreen Frazier, 43, regularly attends Jones’s Sunday sermons at the Fountain of Life Church. She came out to the vigil to stand in solidarity with her community and her Pastor.

Jones’ messages of love and unity are always present in his weekly sermons but are especially needed right now, Frazier said. She wants to see the two sides of Williston come together and embrace each other.

“This city has been torn apart,” Frazier said. “Praying will help make a start at putting it back together.”

Jordyn is a reporter for WUFT News who can be reached by calling 352-392-6397 or emailing news@wuft.org.
Previous Last Chance: Florida Considers Clemency Pleas By Felons For Last Time Ahead Of Election
Next Gainesville Reports Increase In Animal Fostering Due To COVID-19