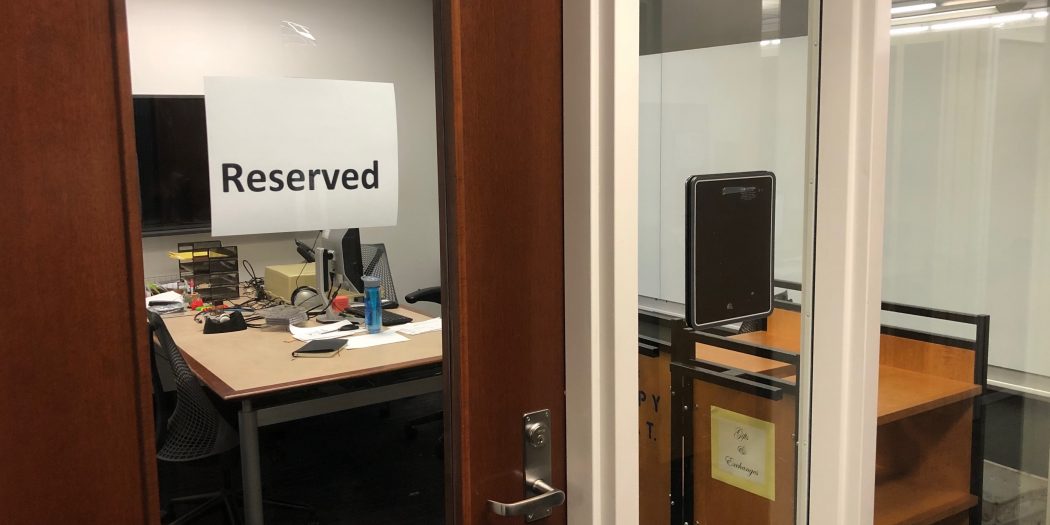 The Benjamin Franklin Room is one study area at the University of Florida’s George A. Smathers' Library West that is now reserved for staff and storage due to the pandemic. (Franki Rosenthal/WUFT News)

Janan Civelek, a senior business administration student at the University of Florida, took the GMAT last month at a testing center in Gainesville, in hopes of becoming a graduate student.

Civelek, 21, of Coral Springs in Broward County, would have preferred to take the exam online in her apartment, where the only possible distraction could be her roommate – her twin sister.

Amid the pandemic, however, with university libraries unable to provide sufficient study space to meet the high demand, it’s become more of a struggle to prepare for crucial standardized graduate entrance exams such as the GMAT, GRE and LSAT.

“It is a stressful thing to worry about,” Civelek said. “If you’re taking an exam at your apartment, you’re just worrying about your roommate coming home screaming or maybe even a loud dog.”

As students nationwide returned to their campuses for fall, many if not most study spaces remained closed or accessible by appointment only.

In one measure of the demand, 415 of the 1,244 students enrolled in the Levin College of Law were once UF undergraduates, the vast majority of whom needed a quiet place to study for and take the LSAT.

Bennett Bramson, 21, of Washington, D.C., is a fourth-year public policy student at the University of Michigan who took the LSAT last month. During his preparation, he found himself devoting much more time than expected to determine where he would take it.

“When I got back to campus, I was honestly just planning to take my exam in my apartment,” Bramson said. “Lucky for me, my grandfather went to law school” in Ann Arbor “and knows people who live in the area who offered their houses up.”

He said his friends took their LSAT exams at different locations.

“I know many people who booked hotel rooms,” said Bramson, who added that others were renting rooms in the campus student union.

According to Michigan’s Shapiro Undergraduate Library, room reservations are offered to students. However, the library was only providing single-use study space and by reservation only for a maximum of two hours per day, an amount most students would contend is too little time.

All of the Florida State University Libraries study rooms were closed to students as of Thursday.

Reed Covitz, 21, of Weston in Broward County, a fourth-year media communication studies major, faced a dilemma as he prepared all summer for the LSAT in Tallahassee. Covitz tried to focus in his apartment’s study spaces, but there was always a distraction.

“Anytime I heard a sound, it would break my train of thought, and it was frustrating,” he said.

At Towson University in Maryland, the Albert S. Cook Library used to reserve its 14 study rooms before COVID-19, said Joyce Garczynski, the assistant university librarian for development and communications.

“With the pandemic, with us reopening and with social distancing requirements, we made our rooms first come, first served with no reservations,” Garczynski said.

That is just one more burden for students to bear because of the pandemic, said Abby Budman, 21, of Cherry Hill, New Jersey, a fourth-year health science student at Towson.

“It’s frustrating because people move back to school to be closer to the resources, and now they don’t even have them,” Budman said.

At UF, the honors program is making accommodations for its students taking all types of exams, according to Mark Law, the program’s director. Law said honors courses are primarily online this semester, which is why there is an opportunity to utilize its classrooms differently.

“While we really only control two classrooms in Little Hall, we’re making the accommodations we can,” Law said. “I’m sure as the fall goes on, we’re going to get more requests than we can possibly handle.”

At UF, those responsible for distance learning programs began discussing in August how to accommodate students who are taking online exams, said Patrick Reakes, senior associate dean of scholarly resources and services at the George A. Smathers Libraries.

There are now 10 ProctorU testing carrels that can now be reserved, however, the 18 larger study rooms in Library West that students typically rely on remain unavailable.

Staff who moved from their offices due to social distancing are now working in the study rooms, Reakes said. And with the libraries operating at 25% capacity, many of the chairs used by students were moved off the floors – and into the study rooms, he said.

“If they’re not full of staff members, they’re full of chairs,” Reakes said.

He is hopeful, however, that UF will find a solution to meet the study needs of its students.

“I know they were willing to consider using other buildings that may be locked down for other reasons, so that students can strictly use for testing,” Reakes said.

Back at FSU, Covitz said it was vital for institutions to find study spaces for its students.

“I’m sure universities are doing what they can to try and be accommodating, but they need to do more,” he said, while noting that he chose to drive home seven hours to take his LSAT.

“I wasn’t willing to risk that for an exam this important,” he said.

Franki is a reporter for WUFT News who can be reached by calling 352-392-6397 or emailing news@wuft.org.
Previous The Point, Sept. 18, 2020: UF Professor’s Analysis Finds 100,000 Vote-By-Mail Ballots Might Not Count In November
Next UF Hillel Rosh Hashanah Events To Accommodate COVID-19