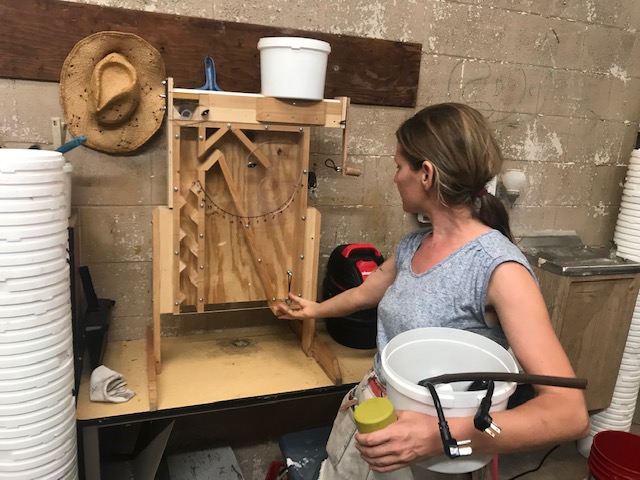 Packaged seeds for sale at Working Food that were grown through the seed saving program. (Andrea Maduro/WUFT News)

Gardening can mean more than just growing pretty flowers. It can mean a healthier planet.

The Gainesville City Commission in the fall declared a climate state of emergency — a largely symbolic move with little municipal heft behind it compared to the actions the federal government could take if motivated and mobilized — but some city residents do feel a sense of urgency to take steps toward combating climate change.

Seed saving is one option. The practice is a variety of gardening in which seeds are extracted, cleaned, stored, and replanted — and the plant itself is eaten.

Melissa DeSa, the director of Working Food’s Community Programs, started her own seed saving program out of her Gainesville home in 2011 and used a local church’s spare room to refrigerate and store seeds.

“We started it, and it was really fun, but it was tiny, and that just kind of snowballed because the more we did it, the more I started reading and learning about seeds, I realized how important it was to be protecting regional seeds, to be sharing again with people the knowledge about saving seeds,” DeSa said. “People were learning a lot and getting interested in growing gardens, but they weren’t learning about growing seeds.”

Now, with funding from grants and Community Supported Agriculture members, DeSa’s program runs out of GROW Hub, a local plant nursery. She said the community should realize the implications of seed saving.

“To be able to have food to eat… You know, if people aren’t saving seeds and they’re not concerned with the varieties that do well in their region, we’re starving without seeds, essentially. Most of the things that we’re eating every day come from a seed,” DeSa said.

City Commissioner Helen Warren echoed DeSa and said seed saving goes back to the beginnings of agricultural practices, which she said have been undermined by big companies that try to genetically modify plants.

“The core of healthy gardening keeps coming back to some basic practices that include this type of seed capturing and getting the seeds that are free of any of this other bioengineering. It’s critical to be able to have the resources for a healthy seed stock,” Warren said.

Warren said the city should look at the resources closer to home in order to start rebuilding a healthy environment.

“There’s an equation of savings of cost and savings to the environment by growing locally and supporting those local growers. It’s the least impact on the environment when you can avoid diesels of ships across the ocean and diesel in trucks across the country,” she said.

Beyond the environmental benefits of seed saving, nutritional value also comes to the forefront.

“What we have in grocery stores right now are just simple seeds that are really modified, and so, if we keep doing what Melissa’s doing with the seed program, we have the option of not only producing different varieties around those foods, but actually providing nutrition in a different way through our food,” Rella said.

The roselle plant is an example of a nutritious food, full of Vitamin C, that’s harvested at Working Food. As DeSa walked through the seed-saving process, she said this plant is one everyone should grow in his or her gardens.

“We have a very simple tool that’s just a sharpened metal copper tube that we just really gently use to pop the seed pod out and then all we have left is the calyx, which is the fleshy covering around the seed pod that protects it after it’s been a flower and it was pollinated, and that way we can save our seeds and also have an edible product at the end,” she said.

Another plant DeSa works with is the Dudley Family Corn, which almost became extinct when producers weren’t taking care of its seeds. DeSa said the corn is essential because it’s able to survive north central Florida’s summer rains, heat, and humidity, but climate change forced her to change the way she cares for it.

“And, just talking with farmers and acknowledging that this old variety might be great, but in current circumstances, we might have to adapt our practices,” DeSa said. “What we’re hearing over and over again is that what used to work isn’t working anymore, so we would like to protect this variety to avoid some of the issues we’re facing with hotter and longer summers.”

Andrea is a reporter for WUFT News who can be reached by calling 352-392-6397 or emailing news@wuft.org.
Previous 100 Stories From WUFT That Kept You Informed In 2019
Next Susan Thomas: Succeeding With Schizoaffective Disorder With Help From The Gainesville Opportunity Center