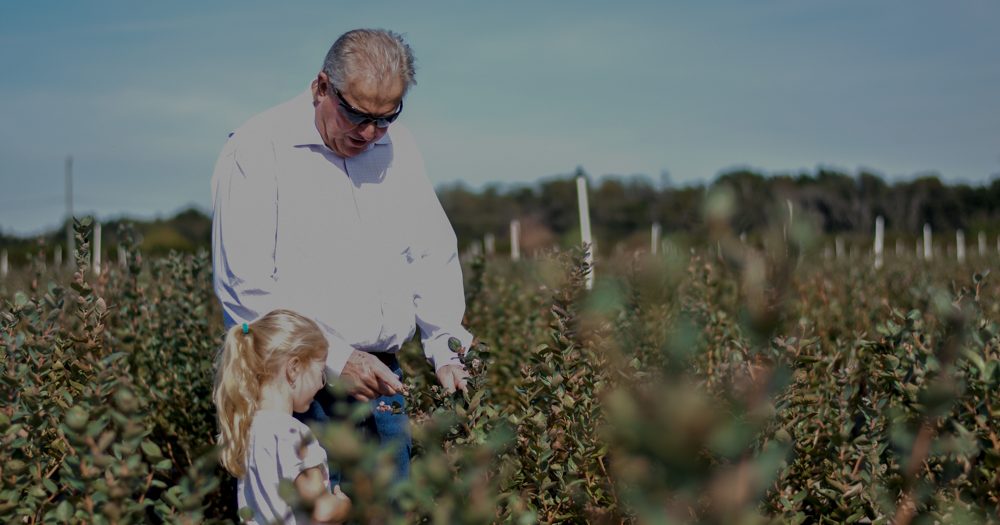 Bill Braswell and granddaughter, Kamryn, inspect a bush of Magica-strain blueberries on his Auburndale farm. Braswell went organic five years ago as a buffer against the swell of conventional berries being imported from Mexico. (Gabriella Paul/WUFT News)

USMCA To Be Major Issue For Florida Blueberry Growers In 2020

Bill Braswell navigates toward a lot of almost-ripe blueberries on his 60-acre farm.  His 6-year-old passenger, Kamryn, helps steer the golf cart. Together they inspect a bush of “Magica”-strain organic blueberries due for harvest in two weeks.

He intercepts his granddaughter’s hungry fingers mid-grab on a still-green bundle of berries.

Braswell said it is a bad deal for Florida berry growers.

Under NAFTA, growers were already losing in the fight against ever-dwindling prices of berries imported from across the southern border in Mexico. Growers blame the lack of protections for specialty crops in the 25-year-old trade agreement as a culprit in the decline of American-grown tomatoes about 10 years ago. Now Southeastern growers are sounding the same alarm to save homegrown blueberries.

The USMCA or as some call it — NAFTA 2.0 — was among Trump’s  2016 presidential campaign promises. After signing the document last November, he took to Twitter to tout the benefits of the new deal “for all.” On Tuesday, he reiterated online that the deal is “Good for everybody — Farmers, Manufacturers, Energy, Unions.”

But Southeastern berry growers say otherwise. The USMCA, if ratified by Congress by the end of the month, will ensure that an already bad situation for berry farmers will grow worse in 2020. In Florida, some even face the risk of having to close berry farms on which their families have toiled for five or six generations.

If so, come next November, Trump may lose something, too — Florida growers’ support.

Some Southeastern growers view the USMCA as a failed promise by Trump, one made during his campaign to prioritize fair trade and U.S. labor in the eventual redrafting of NAFTA. Others lay the blame beyond the Oval Office; growers fault the elected administration under Trump, certain federal government agencies and a handful of American companies that have monopolized the domestic berry market.

The USMCA has deepened growers’ stances along party lines. For Trump supporters, like Braswell, their loyalty is unwavering.

“I’ll support Trump and here’s why: Because I was a member of the Agricultural Technical Advisory Committee, appointed by Barack Obama, ” Braswell said. “ I feel like I have a little inside baseball knowledge.”

Those who did not support Trump in 2016 express even more determination to cast votes against him.

“It absolutely affects my voting tendencies, I’d be crazy to vote against my self-interest in something like this,” said Hugh Kent, the owner of King Grove Organic Farm.

One thing is clear: Growers’ allegiance to party may not flip-flop come November, but their opinion of the current administration, along with their livelihoods as growers, may be irreparably damaged in light of the coming trade deal.

Ten years ago, Braswell predicted the crisis in the domestic berry market.

“When Mexico is planting thousands of acres of blueberries, guess what?” he asked. “It’s gonna knock us hard.”

While heading up Florida’s top berry association ten years ago, he also served as one of 22 advisors to trade representative Robert Lighthizer in Washington, D.C. Braswell’s concerns about Mexico’s flooding the market have now come to reality and will soon be even more difficult to overcome with ratification of the USMCA.

Braswell said the deal stacks cards against Southeastern growers, but he doesn’t fault the president for the crisis they face.

He said the new deal will handsomely benefit American exports aside from specialty crops, like blueberries, with a 1.1 percent increase in total exports projected by the U.S. International Trade Commission.

Braswell predicted that provisions for specialty crop growers will be carved out in the future to help them compete with blueberry imports that have increased 34-fold since 2010 according to a University of Florida study.

In the meantime, Braswell is an anomaly among Florida growers. His foresight a decade ago kept his berry farm in the black. He converted Polkdale Farms to a fully organic operation and soon plans to mechanize his harvests.

The reality for most growers — who cannot afford to grow organic or replace hand labor with machinery — is grim.

Back in July, Bud Chiles was so concerned about the imported berries flooding U.S. markets that the North Florida grower and 2010 candidate for governor organized the first meeting of what would become a grassroots campaign of desperate blueberry growers.

The parking lot at the chosen destination — a Fairfield Inn off Interstate 75 — filled up with heavy-duty F-150s and lifted Ram trucks driven by farmers. The 3 p.m. meeting, in a 69-person capacity conference room, was hosted in conjunction with the Florida Blueberry Growers Association and the Florida Department of Agriculture.

Chiles opened the meeting with prayer, asking God to bless their crops and their families. He owns Jubilee Orchards in Tallahassee, where his family has nicknamed the fruit “Jubilee blues.”

In the meeting room, so many farmers young and old gathered that the AC unit audibly suffered. Three-page packets, titled “Florida and Georgia Growers’ Action Plan To Stop Mexican Flooding in Our Markets,” were neatly paper-clipped and distributed. The faces of men and women across the room were long, heavy with concern for the fate of the blueberry farms their families have owned, often for generations.

Donna Miller, owner of D&J Farms, sat in the sea of green, felted chairs. She worried she might file for bankruptcy in the coming season.

Tim Davis was nearby. The retired FBI agent tends two acres of organic berries in Lake Park, Georgia. He feels forgotten by the language in the trade deal and by the president who helped draft it.

Another, Brittany Lee, stood in the back of the room; she presided over the state blueberry association at the time. Her full-time job is managing a 110-acre blueberry plantation in Northeast Florida.

“While the Florida blueberry growers are not opposed to free trade, we advocate for fair trade,” Lee said. “And we don’t feel currently that fair trade is happening.”

On that humid summer afternoon, Chiles told these growers what they already knew: imported produce from Central America would continue to threaten their livelihoods under the USMCA.

Months later, he explained during a phone interview how other countries enforce seasonal protections to keep imported farm products out when the domestic product is in season.

“We are the only country in the world that allows this to happen,” Chiles said. “You know, you can’t bring fresh milk into Canada in their dairy season — they don’t permit it.”

During the July meeting, Chiles had rallied the growers for more than an hour. By the end of the meeting, the group had come to an unsurprising consensus: Passage of the USMCA was imminent, so they would control what they could: their voices, their votes and public awareness.

“This is an American farm story,” Chiles said. “It’s a national story; what’s going on is not just a Southeastern issue.”

Chiles insists that consumers in the U.S. are being hoodwinked. He said misleading labels from major produce companies – like Driscoll’s or Dole Fruit Company – imply the produce is grown in the United States when the fruit is often grown elsewhere and distributed by American companies.

A Driscoll’s spokesperson later responded to this claim, saying, “By law, the fresh produce industry has a requirement to provide transparency about its various growing regions — with the inclusion of an accurate label. Driscoll’s is compliant with the law.”

But Chiles maintains there is a false notion that Mexican-run farms are solely responsible for the swell in the U.S. berry market when the real Goliaths of unfair North American trade are the American distributing companies.

“There’s a lot of implications for American consumers who think they’re buying a local, fresh product when often times it’s a product brought across thousands of miles,” Chiles said.

Chiles argues that because the U.S. does not have jurisdiction over farming practices in other countries, imported produce is less rigorously regulated, unfairly skewing the playing field against American farmers.

Kent, who repurposed orange groves established in 1874 for his Central Florida berry farm, forecasts that homegrown blueberries will face the same grave fate as American-grown tomatoes in the next few years, if nothing is done.

“The tomato guys are pretty much out of business, the real organic ones are,” he said. “[And] the berry growers are disappearing.”

Kent fears the USMCA will freeze the fateful situation berry farmers face in 2020 and possibly for the next 20 years.

He said Trump’s performance as chief diplomat will have a major influence on his vote in November.

“It’s a real disappointment that our agriculture policy in this country just continues to protect and subsidize commodity crop growers — wheat, corn and soy — in the Midwest,” he said. “It seems like vegetables, fruit and nut growers don’t get that same kind of attention and awareness.”

Editor’s note: This story has been updated to include a response from Driscoll’s and more accurately attribute the opinions of the Florida berry farmers with regards to USDA regulations on organic produce.

Gabriella Paul is a reporter for WUFT. She can be reached at gabbympaul@ufl.edu.
Previous Ocala Mayor Kent Guinn Eyes Run For Congress
Next Sunshine Savior