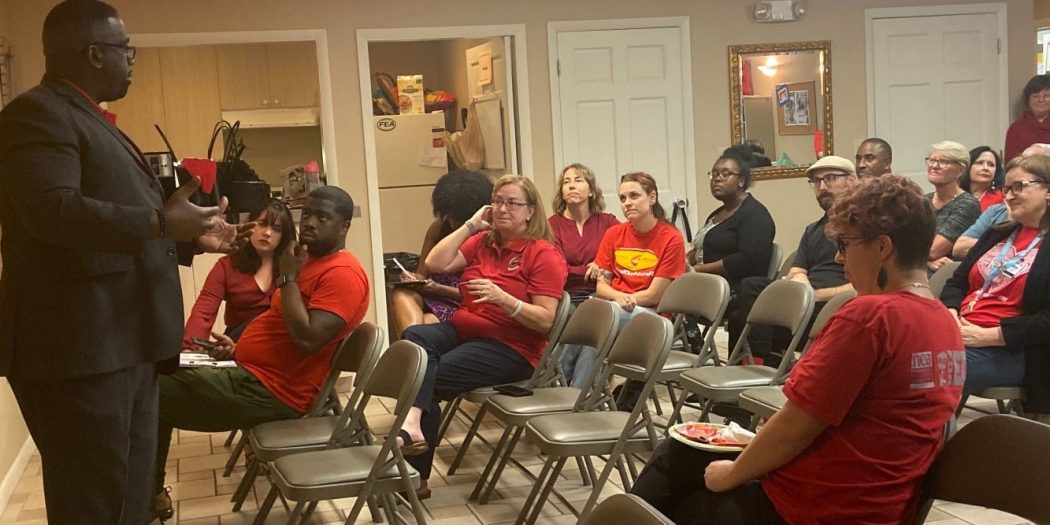 Fedrick Ingram, president of the Florida Education Association, speaks to the supporters of the teachers union about the importance of a fully funded education. (Dana Bryan/WUFT News)

Angela Wright, proud mother of eight children, was home for only an hour before driving to the Florida Education Association meeting Wednesday night.

Wright, a computer proctor and union representative for her school, said she speaks as a mother who has noticed the changes in the Florida school system over the years. She had just finished her shift at Hawthorne Middle and High School before heading to the meeting.

“When you work together, when you have a voice and let people know what’s going on, it can make a difference,” she said. “When you sit back quiet, nothing will happen.”

Promptly at 6 p.m., Wright and about 20 other people sat down in the back room of the County Education Association building to listen to the statewide teachers union discuss common problems in Florida schools.

Fedrick C. Ingram, president of the union, spoke about the lack of funding for public schools and the fight for decisions regarding education to be made locally.

“We can no longer afford to teach and believe everything is going to be okay,” he said. “It’s not.”

The Florida Education Association is a labor union that advocates for a free, quality public education for all. It includes more than 100 local unions and service units with more than 145,000 members.

Carole Gauronskas, secretary and treasurer of the union, is no stranger to underfunded programs. She worked nine years in emotional behavioral, self-contained classrooms with children in kindergarten through fifth grade in St. Augustine.

“We were just always running, looking for resources,” Gauronskas said.

She said she had to use “piecemeal books and workbooks” to teach her children because the school district didn’t get funding from the state for proper textbooks.

“If we don’t fully fund what we need, for what my babies need, they’re never going to get to the point to where they can be in a general education class,” she said.

“God bless the governor, but that’s not right,” he said.

He argued that the proposal neglects other education professionals who work to better the school, such as paraprofessionals, security guards and cafeteria workers. The governor’s proposal has already met some resistance. Senate President Bill Galvano said Tuesday he is unsure of whether Florida can afford the figure proposed.

“Things that really help motivate our kids,” he said.

“They need to be able to take band and PE,” he said. “Or PE and art or robotics and band.”

Dixson said he believes these electives will help to develop students’ interests and push them to be more versatile and balanced.

“All kind of madness can take place in your life later on, but once you have a foundation [in education] you can move on,” Wright said.

On Jan. 13, the teachers union will aim to have 400 supporters from Alachua County travel to Tallahassee with signs to rally for the cause, inviting people from all over the state to come. The annual legislative session will begin the following day.

Once the meeting ended, Wright left to go to Bible study. Dixson shook a few familiar hands, exchanged a couple smiles and then headed out. Other union members, teachers and education workers slowly followed suit, until it was just those in leadership positions left.

Dana is a reporter for WUFT News who can be reached by calling 352-392-6397 or emailing news@wuft.org.
Previous Twitter Suspends Personal Account Of Florida Congressman Who Supports Trump
Next The Point, Nov. 1, 2019: How Much Would Florida’s Teacher Pay Ranking Change Under The Governor’s Proposal?